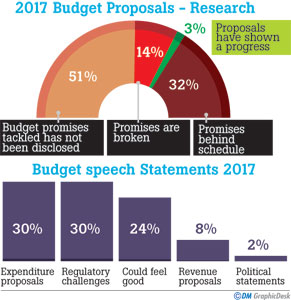 Only 3% of the proposals in the 2017 budget have shown any progress while information on the progress of 51% of the budget proposals tackled has not been disclosed, a research carried out by a private think tank organization has revealed.

Executive Director Verite Research Dr. Nishan De Mel said this could be the case with all the governments that had ruled the country in the past few decades. He said it is not clear as to what had happened to the funds which have been allocated for the projects which are not disclosed.

Government MP and Member of Oversight Committee on Finance Professor Ashubodha Marasinghe who also attended the media briefing said the inefficiency level of some ministries have been less than 50 percent that had failed to utilize funds allocated for them. “The Oversight Committee had revealed this from the study it had done on ministries in the recent past,” he said.

“We found out that some ministries have planned to spend funds for unwanted projects such as spending for new buildings and we have ordered the ministries to stop these projects. It was possible to cut down some of the expenses” the MP added.