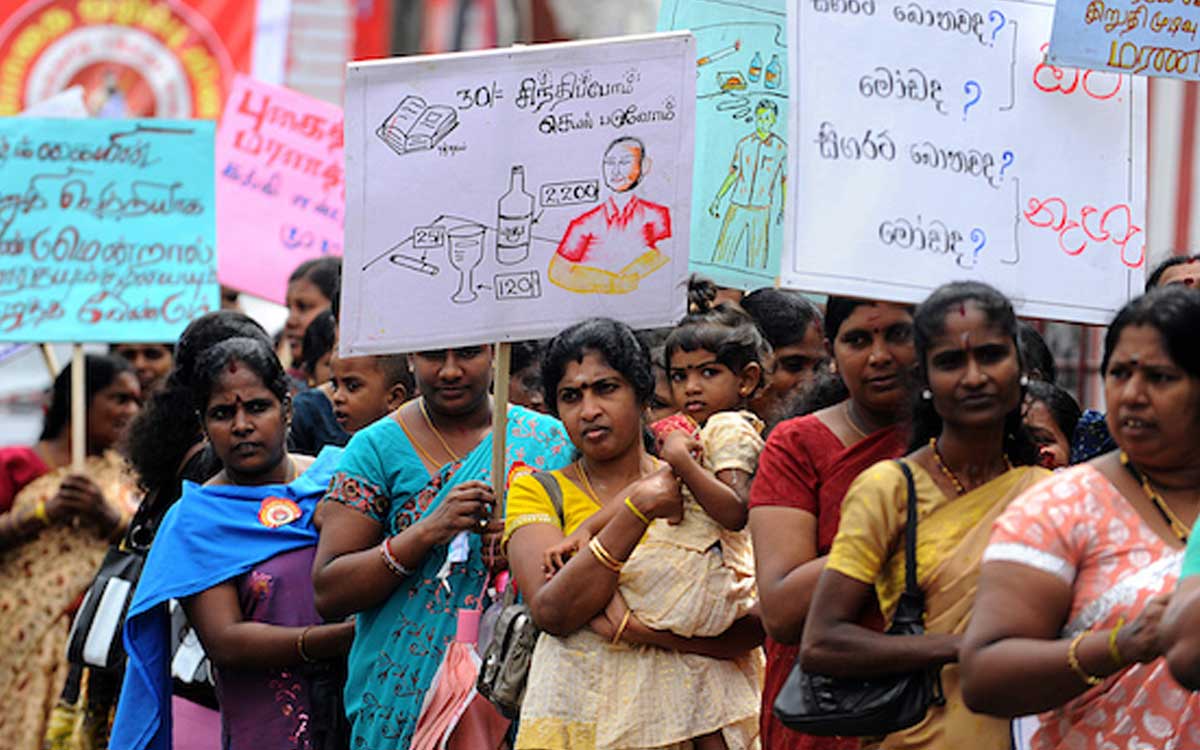 Sri Lankan Tamils demonstrate against tobacco and alcohol in Colombo in June 2013. The government’s hasty reinstatement of a ban on women buying alcohol has brought accusations of discrimination. (Photo by Ishara Kodikara/AFP)

A reinstated ban on Sri Lankan women buying alcohol and serving liquor in bars and restaurants has brought an angry reaction from women’s groups.

The government lifted the ban on Jan. 10 but a few days later President Maithripala Sirisena bowed to pressure from social groups including Buddhist religious leaders to block the move. His decision was backed by his cabinet.

Nimalka Fernando, president of the International Movement against All Forms of Discrimination and Racism, said she believed this old law should have been amended a long time ago.

“The religious and political hierarchy is dominated by patriarchy,” the attorney-at-law told ucanews.com.

She said the cultural concerns cited by the president had “pulled back” society on the basis of religion and culture. “They are man-made.”

Verite, a research body, said the 60-year ban on women buying and selling alcohol was unconstitutional and an infringement of fundamental rights.

“It never leads to a greater incidence of alcoholism among women as the religious leaders think,” said Jayamaha.

A petition has been filed by 11 female activists citing that Excise Notification No.666 of 1979 that places restrictions on women was a draconian measure that was arbitrary, irrational, unreasonable and discriminatory to female citizens.

The January 2018 Excise Notification revoked this prohibition and noted that the imposition of a prohibition applicable to members of only one gender was tantamount to unequal treatment, the petitioners argued.

Women’s activist Shireen Saroor queried why, when Sri Lanka had given equal opportunities for jobs for all, women’s access to a livelihood was being limited, especially as female bartenders get better tips.

“This country is ruled by religious leaders,” she said.

Most women do not use alcohol as they understand it is contrary to their Sri Lankan culture.

Although a 1955 law in place since British rule bans women from buying or selling alcohol, they are still seen buying liquor from supermarkets and even duty free outlets at the airport.

A Catholic nun, Sister Christine Fernando of the Shramabhimani women’s rights group, said allowing women to buy and sell alcohol was not an area of concern in terms of equality and women’s rights.

She said in some fishing areas she had seen women forced by their husbands to buy alcohol at small shops.

“Equality has to come at ground level on salaries for workers on plantations, in apparel manufacturing factories and fisher folk among other jobs,” said Sister Fernando.