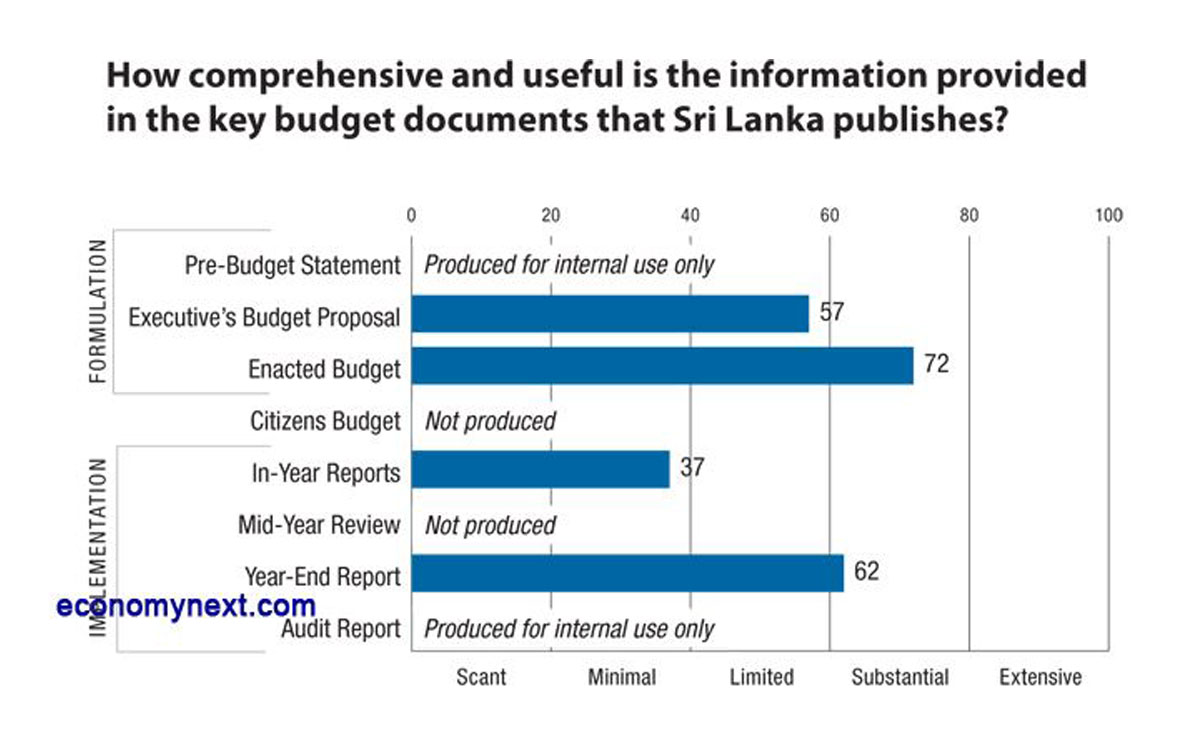 ECONOMYNEXT – Sri Lanka has improved in a global ranking of budget openness, albeit still among the lowest ranked in South Asia, with the government being advised to present a more understandable, non-technical budget document also known as a citizen’s budget.

The government should also provide budget related reports in a consistent format and publish adequate information, in line with international standards, Verité Research, a think-tank, said.

Sri Lanka scored 44 out of 100, in the latest Open Budget Survey covering the 2016/17 budget process, which scores 115 countries on the openness of their budget process, coming in next to last in South Asia, tied with Pakistan.

The Open Budget Survey (OBS), conducted every two years, is the world’s only independent assessment of information disclosure in public budgets.

“The recent assessments of the 2013/14 and 2016/17 budget processes have placed Sri Lanka 60th in the world and amongst the lowest ranked countries in South Asia,” Verité Research said.

“Afghanistan performed better than Sri Lanka, whereas Bangladesh did not.”

In the latest assessment, compared to the previous, Sri Lanka improved in the information provided each quarter, on revenue, expenditure and debt. However, the quality and timeliness of this information continued to fall short of many of its peers, Verité Research said.

“The government remains compliant with this law, despite falling short of international standards on the quality and scope of its budget reports. There are three simple ways in which Sri Lanka can improve, by going beyond the letter of the law and implementing the Act it in terms of its intended purpose.”

Verité Research said the government should publish a comprehensible, non-technical budget document also known as a citizen’s budget, as current implementation misses the spirit of the act.

“One of the main purposes of the Act is to ‘increase public awareness of the Government’s fiscal policy and to establish standards for evaluating the Government’s conduct of its Fiscal strategy’,,” Verité Research said.

“To achieve this, the Act requires the publication of the budget speech, and the draft budget estimates, which are provided to parliament. But neither of these achieves the expected outcome of being a comprehensible and adequate overview of the budget.

“The draft estimates are difficult to comprehend, spanning three volumes of about 500 pages each; and the budget speech focuses mainly on new expenditure proposals that cover less than 10% of the budgeted expenditure, leaving the rest opaque.”

Verité Research said the government should also provide budget related reports in a consistent format as another purpose of the law is to help ‘facilitate public scrutiny of fiscal policy and performance’.

For this, the reports should monitor the progress of budgetary outcomes, and help decipher deviations.

“Towards that end, the government conforms to the law by publishing the required documents,” the think-tank said.

“However, the documents are in different formats with different levels of detail thus undermining the purpose of the Act.”

Verité Research also said the government must publish adequate information, in line with international standards, with the existing law falling short in its requirements.

“But there is no report that covers the full year in the same format,” Verité Research said.
“This undermines comparability and scrutiny of the budget information. Neither does the Act require periodic updates of the budget, or audit reports, which are integral to meeting international standards.”

Verité Research said the improvement suggested the improvements suggested were well within the scope of what is achievable in a short time-frame as in past years Sri Lanka has performed better than in recent years.

“Firstly, to go beyond the letter of the law and publish timely budget information in consistent formats. The goal should be to enhance the comprehensibility and comparability across documents.

“Secondly, to recognise the gaps in terms of budget information required by the law and publish adequate information that allows for the proper monitoring and scrutiny of budgetary outcomes and compliance.”

Verité Research said the public appetite for budget accountability has increased since the 2018 budget was presented to parliament.

“Sri Lanka has legislation in place that allows for public scrutiny of budget information. But the shortfalls in implementation, and the gaps in the requirements specified, are resulting in the country coming out in a poor light in international rankings on budget openness.”
(COLOMBO, January 31, 2018)