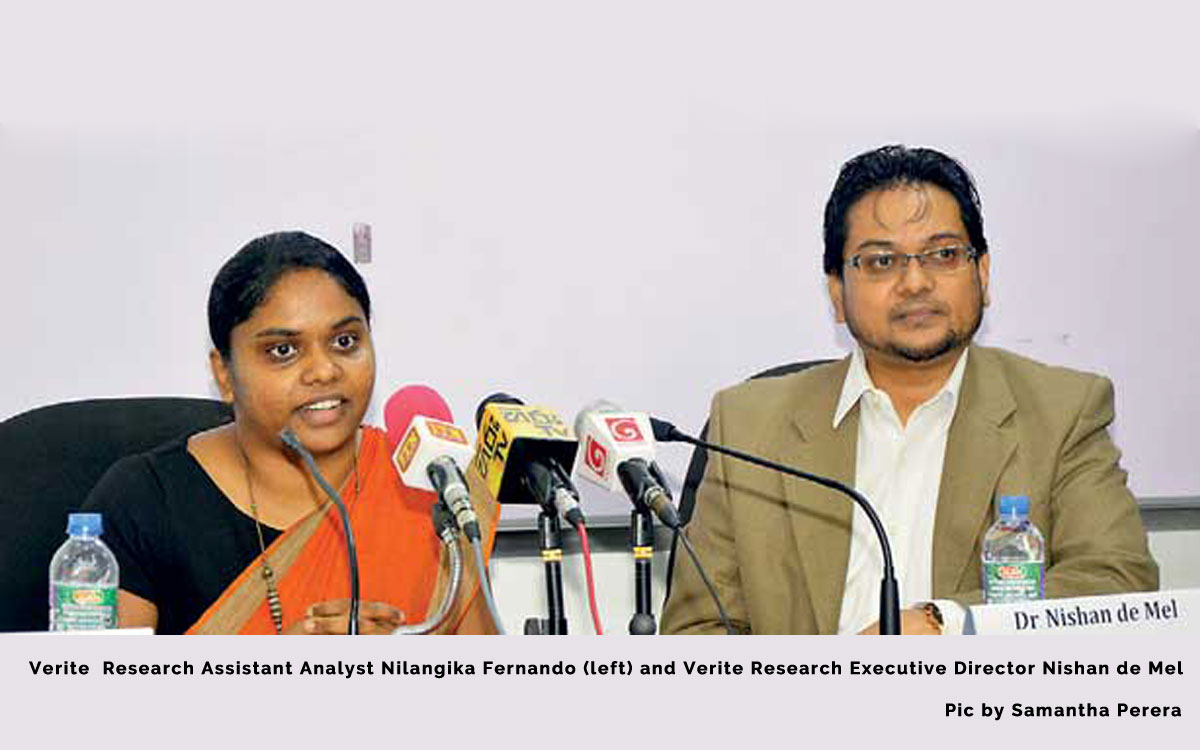 Sri Lanka improved its budget transparency last year compared to two years ago under the Open Budget Survey, although it ranked the second lowest among its South Asian peers, according to Verite Research (Pvt) Ltd.

“Sri Lanka did better in 2016/17 compared to 2013/14, but there is greater potential for Sri Lanka,” Verite Research Executive Director Nishan de Mel said during a media briefing yesterday. Sri Lanka gained a score of 44 out of 100 in the latest edition, compared to 39 in the previous edition in 2013/14, but staying ahead of the global average score of 42.Sri Lanka is now ranked 60th out of the 115 countries surveyed compared to 69th previously, but is the second lowest ranked in South Asia—tied with Pakistan, but better off than only Bangladesh—the index showed.

“In the past, Sri Lanka was thought of as being the best country in South Asia. Sri Lanka has been improving, but other countries are improving much faster,” de Mel said.

He said that Sri Lanka had scored as high as 67 in the 2008/09 survey, but this was due to the government being more open than usual in order to obtain a loan from the International Monetary Fund (IMF), as has historically been the case when the country wanted to attract big projects from multilateral institutions.

However, this was not witnessed in the latest rankings, since the new IMF facility was negotiated in 2015, which was a particularly “messy year” due to the interim budget, according to de Mel.

Of the eight documents Sri Lanka has to publish punctually to get a good score in the Open Budget Survey, just four were published on time, while two others were either published late or only available for internal government use and the remaining two were never published, the survey indicated.

A citizen’s budget for easy understanding of the total budgetary revenue and expenditure statements—and not just the 10 percent of the new proposals included in each budget speech—along with a mid-year review which covers the first 6 months of a year were not published.

The pre-budget statement and the audit report were published late, not published online or produced only for government use.

Even the reports published were found wanting in the robustness of the information, and the reports were not comparable with each other due to non-compatibility of the data, which were classified in different methods for differing reports, de Mel said.

He said that public participation in Sri Lanka’s budget was weak, scoring 11 out of 100, while oversight by the legislature on actual expenditure was limited, scoring 57.

Oversight by the Auditor General was found to be adequate, scoring 67, but this oversight has found the process wanting, de Mel said.

“He provides adequate oversight, but if you read the Auditor General’s reports over the last 20 years, you will realise that the Auditor General is actually given significant qualifications and negative comments on the budget formulation, and he is making equivalent to a private company  that the auditor is having serious concerns, or refusing to approve the accounts of a private company,” de Mel said.

He added that although Sri Lanka ranks poorly in the rankings of the Open Budget Survey, according to the Fiscal Management Responsibility Act, the government is publishing the required reports.

“Our bureaucrats are quite skilful at fulfilling the letter of the law. So you can’t say that they broke the law. But in terms of the spirit of the law, they are not up to standard,” he said.