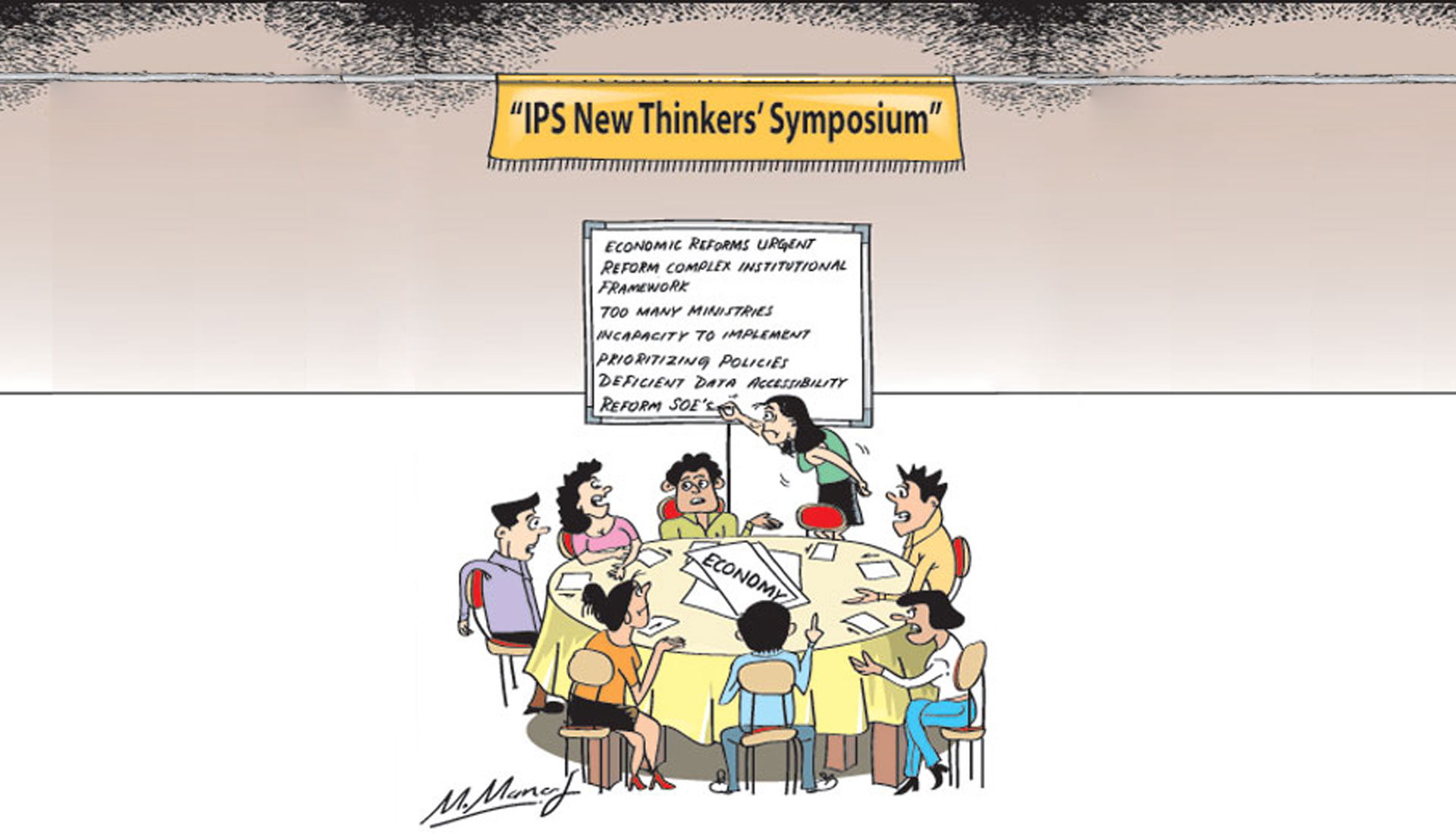 Among the conclusions of the New Thinkers’ Symposium were that economic reforms are urgent; that institutional misalignment, misidentified reforms, and data deficiencies are key structural and institutional bottlenecks hampering the successful implementation of Vision 2025; and that the most severe impediment to national economic policy implementation is the complex institutional framework within a bloated public sector that lacks coordination and capacity.

Key obstacles
Undoubtedly, these key issues identified by the need to be addressed for the country’s economic development. The young economists highlighted key obstacles to the country’s development: “Economic reforms have become an urgent need for Sri Lanka, with successive governments since independence, resorting to short-term, politically expedient economic strategies that have placed considerable macroeconomic pressures whilst reducing Sri Lanka’s global competitiveness.”

Institutional Misalignment
The young thinkers also pointed out the institutional misalignment, misidentified reforms, and data deficiencies as key structural and institutional bottlenecks hampering the successful implementation of Vision 2025.They pointed out that “The most severe impediment to national economic policy implementation is the complex institutional framework within Sri Lanka’s public sector, which lacks coordination and capacity, and is worryingly bloated.” It has too many workers “who are engaged in duplicative work while being subject to constant shifts in ministerial portfolios; a recipe for inaction of any national economic action plan.”

Bloated public institutions
Given that unstable and bloated public institutions are often a reality that developing economies must contend with, the young thinkers suggested a practical approach of adopting ‘clusters’ of core subjects areas that group together multiple ministerial portfolios belonging to the same core subject area. Under such a framework, clusters should coordinate closely to avoid duplicating mandates. The current ad-hoc division of ministerial portfolios they pointed out creates conflicts of interest whilst also hindering the scope of policy consistency and continuity. 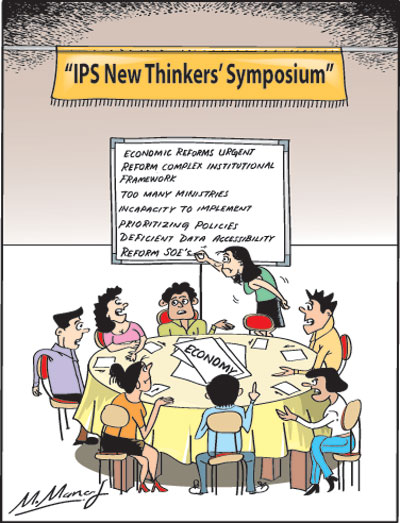 Implementation
It is widely recognised that one of the most serious deficiencies of the present administration is its incapacity to implement policies. This is known in the literature as ‘bureau pathology’. The New Thinkers’ Symposium identified and elaborated on this pervasive problem: “Institutional excess in Sri Lanka’s public sector is giving rise to ‘institutional fragmentation’ and instability, which is ultimately the primary hindrance to implementation of any reform agenda. Policy ‘roadmaps’ such as Vision 2025 – which have undergone a consultative process to include inputs of relevant stakeholders – are likely to be futile in the absence of a stable institutional setup to implement the mapped out reforms.”

Too many ministries
It explained this inefficiency: “Too many ministries, agencies, and departments, result in overlapping functions and mandates, which leads to institutional fragmentation.” The summary of the discussions in Talking Economics illustrated this with the case of the Department of Project Management and Monitoring, which experienced three changes in its overlooking ministry in the space of three years.

Misidentified reforms
Economic reforms, the symposium pointed out are often spread over a significant amount of time and require considerable sequencing. “In this regard, it is vital that the government undertakes reforms that are most impactful on the economy, while taking into account “low hanging fruit”.
For instance, when considering the impact of Information Communication Technology (ICT) on the economy, policies to enable flexible working conditions facilitated by ICT and improved online payment mechanisms can have a much larger marginal benefit to the economy than the significant investment cost of providing free wifi to the public. For instance, it observed that internet usage is low in Sri Lanka, amidst relatively affordable and higher internet speeds, compared to other countries in the region.

Similarly, on education reforms, low levels of tertiary enrolment in STEM (Science, Technology, Engineering, Mathematics) subjects has a knock on effect on the economy, with only 3.1% of the population above the age of 15 engaged in science and technology related education and employment.

Prioritising
Important advice to the government was that “Given the current challenges regarding broad economic reforms, the government should concentrate on prioritising policies that have wide public and bipartisan support, such as accommodating flexible office hours and less rigid working conditions.”

Deficient data accessibility
The symposium pointed out that successful reform identification, proposal, and implementation depend heavily on evidence-based policymaking. Therefore, deficiencies in data accessibility are a leading obstacle to good policy research in Sri Lanka, and ultimately to its capacity to influence policy reform. This is a composite problem due to obscure governance structures and poor access to official data and information.

It added that this problem affects the research community and university students alike. Using facilities like the Right to Information (RTI) Act has led to some improvements – however, Verite Research finds that nearly 90 percent of 55 public authorities are ‘moderately unsatisfactory’ in their proactive disclosure of information and only 2% moderately satisfactory’ with regards to the same. This issue links back to poor public service delivery, under a highly complex institutional setup, making the accessing of datasets time consuming or impossible.

Policy reform
The deliberations pointed out that: “Unfortunately, Sri Lanka’s history of economic policy reforms has often been defined by their short-term nature, despite the necessity for long-lasting economic reforms heightening in recent years. Regardless of political affiliation, the country’s economic future will be determined by responsible policymaking over the next few years that address structural and institutional weaknesses. While political will is important to successfully implement these reforms and the appetite for reforms has waned recently, there is significant scope for reforms with little to no political costs. Even these reforms, however, are likely to be undermined by bottlenecks discussed above, unless the government takes decisive steps to mitigate them.”

Congratulations
The Institute of Policy Studies must be congratulated on its foresight to organise this symposium for young thinkers. The excellent summary of the symposium by IPS researchers, Kithmina Hewage and Harini Weerasekera published in Talking Economics is a valuable contribution to the discussion on Sri Lanka’s economy.

Limitation
These valuable insights of the IPS Symposium must be viewed in the context of the political realities. The 2015 coalition government was of two parties with very divergent views on economic policies. In their common interests, there should have been a frank discussion of these differences and a common economic program worked out.

Without such a consensus on economic policies, there was little prospect of effective policy reforms or even an effective implementation. In addition to obstructionist activities the opposition derailed important economic projects. These limitations imposed by the political context grew rather than diminished during the three years.