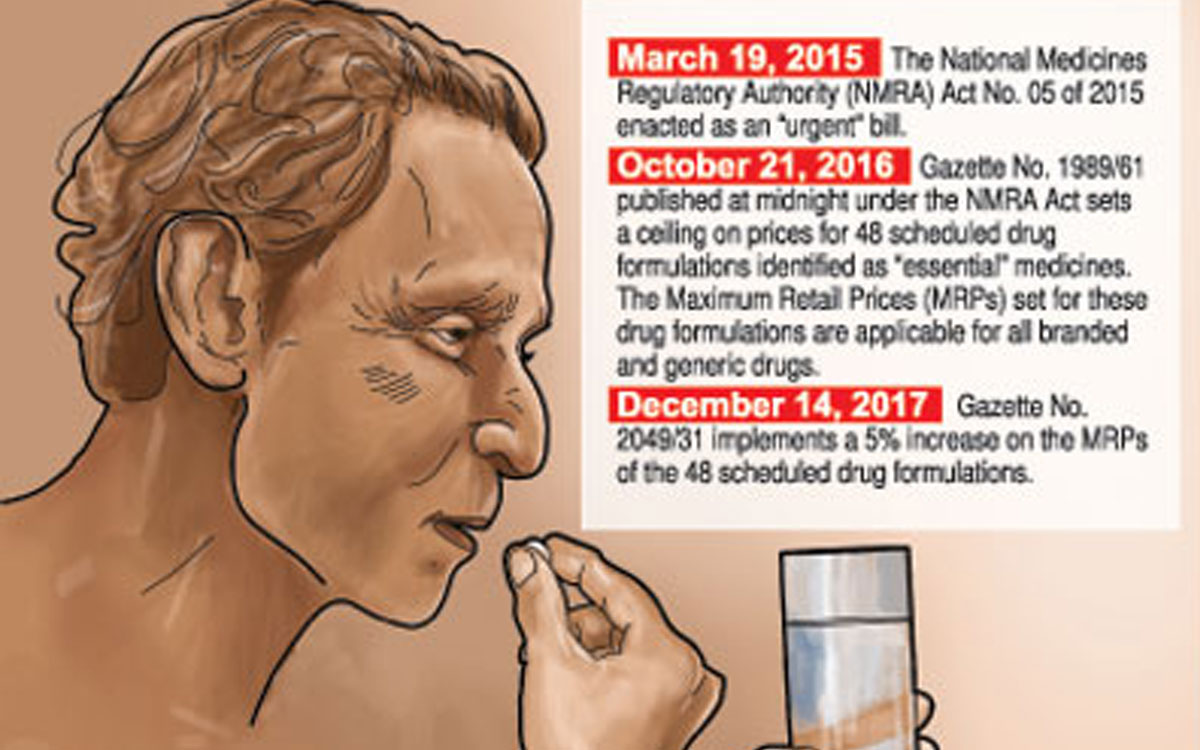 Mixed are the reactions to Health Minister Dr. Rajitha Senaratne’s declaration this week that the prices of 15 more essential drugs are to be slashed with immediate effect.

While the Pricing Committee of the National Medicines Regulatory Authority (NMRA) met on Friday, its member Dr. Ananda Wijewickrama told the Sunday Times that the relevant Gazette indicating the 15 drugs would be out shortly. He, however, declined to name the drugs which would be on that list.

This was as some commended the move of reducing the prices of 15 more drugs as “good” and others warned that “rushed” decisions would not augur well for the patients, as quality was of paramount importance. A strong view was that the need of the hour for Sri Lanka was a laboratory which is able to test the quality of drugs, at least the often-used drugs.

Raising concerns, sources told the Sunday Times that crucial high-end antibiotics, which are intravenous (IV) products may fall under the 15 drugs. The quality of these high-end IV antibiotics should be ensured. It is the right of a patient to have access to them, said a source, foreseeing several issues if the price-cuts are unfair and unbearable.

Reiterating that if such antibiotics are included in this latest 15-drug group and the price cuts cannot be borne by the importing companies, it may create a vacuum for substandard substitutes, putting patients in grave danger, another source pointed out.

For other sources the comparison came easily – take the case of two cars such as a BMW costing about Rs. 20 million and a Maruti priced at Rs. 2 million. Can there be equal price reductions for both a BMW and a Maruti, they questioned, pointing out that the consumer is usually willing to pay more according to the “quality” of the product. As such a blanket price-cut cannot be imposed on all products.

Justifying the government’s earlier measures in October 2016 to impose a maximum retail price (MRP) on 48 drugs and current moves to bring about price reductions on 15 more, Dr. Wijewickrama said that the usual market forces are not at play in the retail pharmaceutical market in Sri Lanka as well as many other countries. Otherwise, such market forces would have kept prices competitive.

“There are so many varieties of the same drug that price control would wean out some of the drugs, as Sri Lanka cannot conduct quality testing on all products,” he said, pointing out that another important reason why price control is essential is because it is also not consumer (patient) preference that matters but what is either prescribed by the doctor, who may come under the influence of some pharmaceutical companies or the advice of the pharmacist on whom many patients rely on, who are also prone to influence by pharmaceutical companies.

Conceding that quality-testing of medicinal drugs is being carried out to a limited extent, with laboratory improvements now taking place, Dr. Wijewickrama said that Sri Lanka, however, is evaluating drugs in different ways by collecting all the information and looking into dossiers etc.

With regard to price control of drugs, he said that different countries use different ways of doing this. There is a health insurance system in Australia as well as America, under which the insurance company will pick up the bill, not for all drugs, but certain identified brands only. In the United Kingdom (UK), the patient does not pay the pharmacy, but a dispensing fee is paid to the pharmacy whenever it issues drugs on prescription.

Dr. Wijewickrama was quick to point out that unlike in Sri Lanka, the brands available in the health sector in the UK were limited – there was a selected list based on price, of course they were registered and quality-tested.

Rejecting views that branded drug companies would pull out of the Sri Lankan market, he said that it has not happened so far. The biggest problem is that these companies are not willing to show what the cost of production of these drugs is, he said citing the case of America where there is profit-capping to ensure reasonable pricing. It’s not only that Sri Lanka needs to ensure that patients get affordable medications but also that there is no unnecessary flow of cash out of the country.

Dr. Wijewickrama next took up the generics vs brands argument put forth by big pharmaceutical companies, explaining that state hospitals which treat more than 90% of in-patients in the country use generics. “These very ill people, recover and go home,” he said, adding that there have been no major problems.

Quality failures can occur in both generics and brands and that there are big failures among generics is a “boru kathawak” (bogus story), he said, citing the government hospital example.

When asked whether there has been an audit of quality-failures of drugs in state hospitals, he said he did not know.

Other sources, meanwhile, alleged that there were very recent instances where pharmacists were being provided eight packs of particular drugs with two or even four (50%) more packs being given free, so that they could gain undue profits by selling those extra packs.

The worst was that pharmacists were also allegedly being “gifted” with laptops for promoting a particular medication given for impotence, the sources charged.

Several sources, however, raised issues with regard to “ad hoc” price cuts, with the Sunday Times getting hold of an ‘Assessment of Pharmaceutical Price Regulation in Sri Lanka’ conducted by Verite Research in April this year. The research had been commissioned by the Sri Lanka Chamber of Pharmaceutical Industry (SLCPI).

The “independent” study “to assess key aspects pertaining to functioning of the regulatory structure governing pharmaceutical drugs to understand improvements and reforms that can be effected to benefit society”, had been based on desk research, stakeholder interviews and Right to Information (RTI) requests filed with the NMRA and the Health Ministry. (See box please)

The study drawing from the Guidelines on Country Pharmaceutical Pricing Policies of the World Health Organization (WHO) has assessed the effectiveness of regulatory policies governing the pharmaceutical sector on the basis of three factors: