Cigarette Tax Indexation, Getting It Right and Getting it Wrong

Cigarette taxation in Sri Lanka is much in need of more professional management. This is not surprising – much of the government is in need of the same. Cigarette taxes are particularly important to target and focus on, as it now accounts for over Rs. 100 billion in annual revenue to the government.

The high stakes of cigarette taxation are not just on the side of government revenue and dissipated public interest. There are countervailing stakes in the interests of private sector profit as well, which are highly concentrated. This is because, in Sri Lanka, there is a monopoly in cigarette production.

Looking at the history of cigarette taxes suggests that the tussle of interests has generally resulted in government policies and actions generally oscillating between “getting it right” and “getting it wrong”. Or more figuratively, the attempt to get cigarette taxes “right” has been like a man clambering up on one side of the horse, only to fall off the other. The present Insight sets out how that pattern has once again been repeated in the government’s latest budget and its aftermath.

There are two critical flaws in the way cigarette taxation policy was being set in the last two decades. First, there was a lack of consistency in the way cigarette taxes were increased – the frequency and the extent of tax increases suggested a practice of ad hoc decision making. For instance, since 2004, taxes on the cigarette with the second highest market share was subject to only 10 increases, while taxes on the cigarette with the highest market share was subject to 22 increases. With the former, taxes were sometimes not increased for over 24 months, and sometimes increased after 6 months. With the latter, taxes were sometimes increased within 3 months and sometimes not increased for over 18 months (all market share estimates in this article are from 2015 and 2016 data).

Secondly, the calibration of the tax increases allowed cigarettes to become more affordable and reduced the government’s share of cigarette prices, when the stated policy was to achieve the opposite. Exhibit 1 shows the fluctuations in affordability from 1980 onwards, and how these fluctuations have increased significantly after the year 2000. 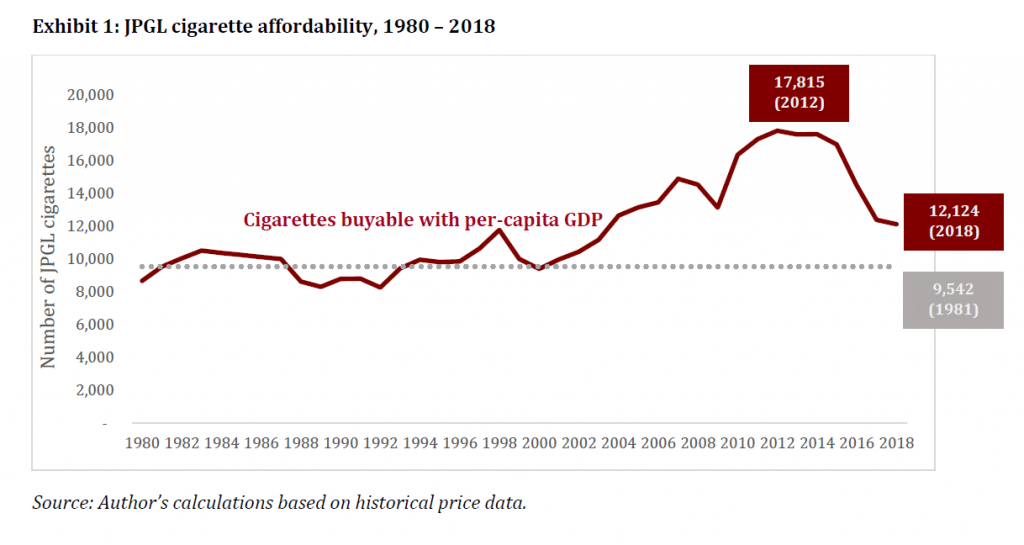 Budget 2019 and its aftermath: getting it “right”

In the budget 2019, the government made a remarkable step in “getting it right”. It announced that hitherto, the setting of cigarette taxes will follow an indexation method: where, the increases were indexed to inflation and GDP growth.  To put it in the Finance Minister’s own words, in the budget speech:

“Excise duty on cigarettes will now be based on indexation with a minimum annual duty increase capturing annual inflation and GDP growth. This will ensure revenue protection and control affordability.”

This policy position in budget 2019 was clearly aimed at “getting it right” in two ways.

First, it was aimed at correcting the historical anomaly of cigarettes having become more affordable rather than less affordable, especially since the year 2000 (see Exhibit 1).

Second, it was aimed at correcting the apparent ad-hocness and inconsistency in the regularity and extent of cigarette tax increases. A properly formulated Indexation method administered annually was an appropriate method of killing both birds with the same stone.

Budget 2019 and its aftermath: getting it “wrong”

It is now a well understood concern in Sri Lanka that policy announcements in budgets are not by themselves good enough. Policies don’t implement themselves, and therefore, budget policies are ultimately only as good as their implementation (a limited and early stage budget implementation tracker can be found at: www.budgetpromises.org).

First, the application of the index-based tax increase was partial. There are five bands of cigarette taxation, based on the length of the cigarette. However, while announcing a policy of increasing cigarette taxes by 12%, the government then failed to gazette the increase in tax for the lowest length of cigarette, which also has the lowest price, and had the second highest market share in 2016. This risks reduction in government revenue through substitution to the lowest priced (and lowest taxed) band.

Second, for the cigarette length bands where the tax increase was applied, the total excise tax was not calibrated methodically based on the length difference. Simply put, applying the indexation method systematically would have meant that relative to the most consumed cigarette, another cigarette that is half the length, should have an excise tax that is no less than half. Currently the excise tax on all the cigarettes shorter than the most consumed length band are less than what can be justified in terms of the reduced. Exhibit 2 shows the calculations, and the percentages by which taxes on these length bands would need to be increased to overcome this deficiency. The required tax increases, for the length bands that have reduced tax, are between 40 to 130 percent to make the lower level of taxation not lower than what could be justified based on length. 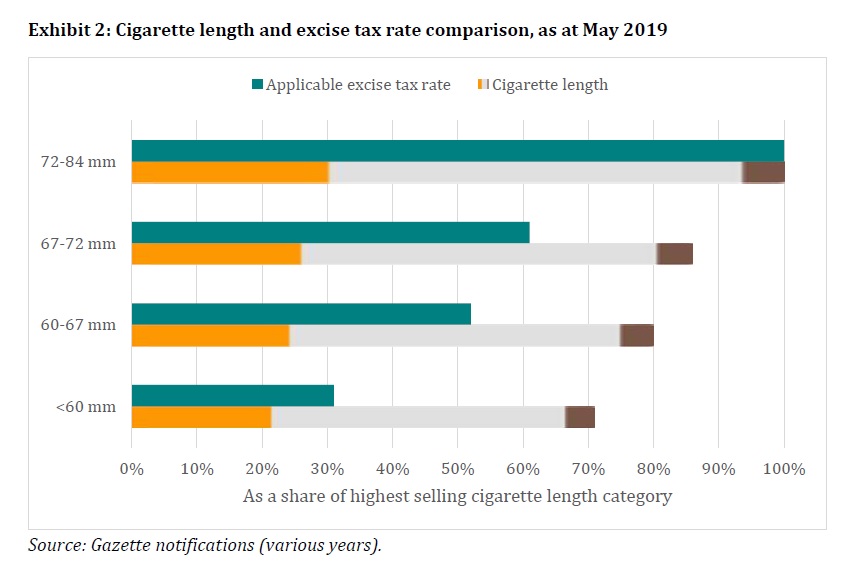 This deficiency in applying the indexation impacts government revenue in two ways: one, it leads to less revenue from those using the lower length cigarettes and two, it risks further reduction in revenue from encouraging more consumers to switch from higher to lower length brands. This is because when the relative tax is too low, the relative price will also tend to be too low, thus encouraging switching.

There are un-analysed claims that the lowest taxed/priced cigarette helps government revenue by preventing switching to beedi consumption. Analysis shows that this claim is poorly thought through.

In contrast, the price difference between these lowest-length cigarette brands and beedi is only Rs. 15 (approx.). The current tax revenue from a cigarette stick in that category is only Rs. 14 (approx.). Therefore, the loss to government revenue when a consumer switches from the highest selling brand to the cheapest brand, is twice as much as when a consumer switches from this cheapest brand to beedi. Therefore, and for more reasons than are analysed here, the largest risk to government revenue is from consumers being encouraged to switch downwards between cigarette brands that are taxed less. This risk is now exacerbated by the indexation policy being poorly implemented.

Robust steps to mitigate this risk can be taken by adopting the policy guidelines emerging from the WHO and the Framework Convention on Tobacco Control (FCTC) to which Sri Lanka is a party. The recommendations include steps to accelerate the tax increases on lower tax bands, to converge with the higher tax bands; and to progressively reduce and eliminate the lower taxation of lower length bands. This enables the government to contain market strategies that can reduce tax revenue through encouraging a consumer switch to lower taxed brands.

The core of this Insight is that the 2019 budget got it right in introducing a method of indexation for setting and increasing cigarette taxes. This can go a long way in fixing two pervasive problems identified in the history of the cigarette tax: (a) lack of regularity and consistency in tax increases, and (b) failing to contain and reduce affordability over a long period of time. As a response to these problems, the policy of Indexation was a remarkable innovation in policy. This time however, despite getting the policy right, the government seems to have gotten the implementation wrong. One, by failing to gazette the stated indexation to the lowest priced/taxed cigarette; and two, by failing to calibrate the taxes on cigarettes with a lower market share in a manner that does not exacerbate the risk of consumers switching to cigarettes that have a lower tax.