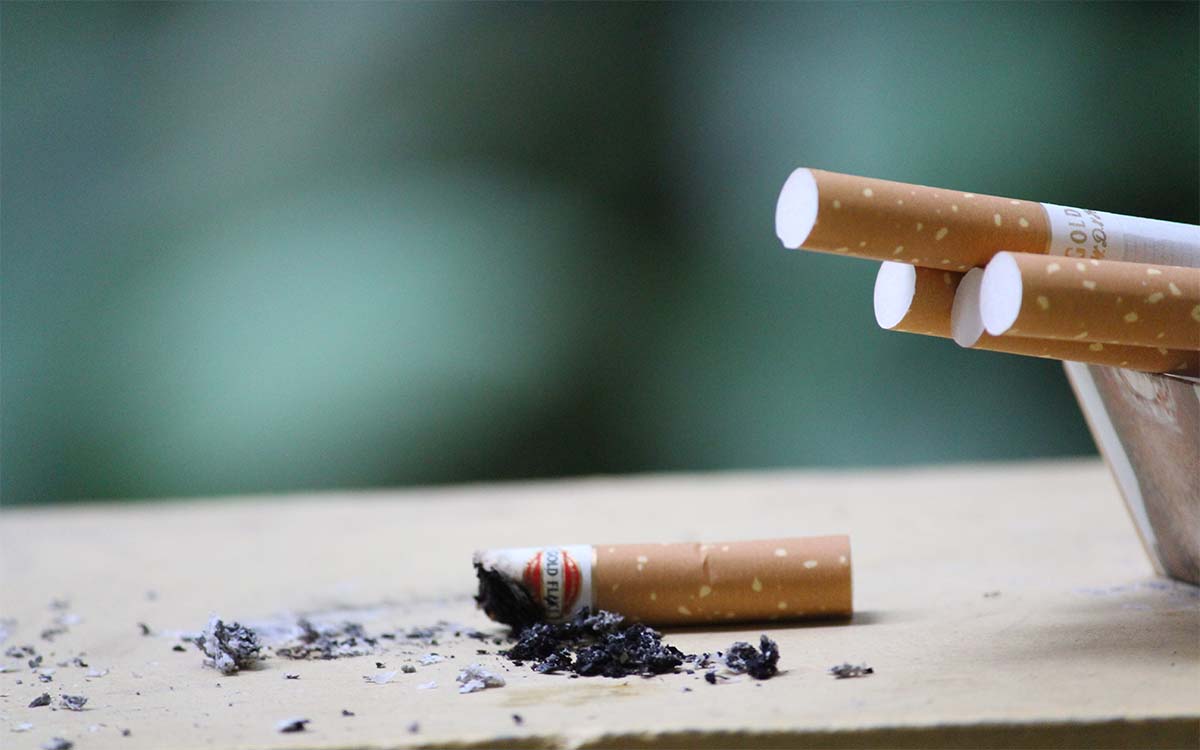 The Sri Lankan government is facing a budget and revenue crisis triggered by the mitigation measures taken to reduce the spread of Covid-19.

This crisis, despite its many downsides, might be an opportunity for the government to rise above vested interests and improve the implementation of cigarette taxation. This Insight shows that cigarettes taxes and prices have not been adjusted upwards in keeping with the fundamentals of fiscal management. In the midst of a fiscal crisis, World No Tobacco Day, falling on the 31st of May, reminds us that allowing cigarettes to remain under-taxed is a serious failure in Sri Lanka’s economic policy.

Previous Insights by Verité Research have highlighted how governments in Sri Lanka have constantly failed to tax cigarettes in a systematic manner that advances social and fiscal interests. Increasing taxes and reducing the affordability of cigarettes not only has beneficial health outcomes to society, it also enhances government revenue.

The Insight, “Cigarette Tax Indexation, Getting It Right and Getting it Wrong” (Daily Mirror, May 2019),pointed out that the2019 Budget took a step in the right direction by introducing a policy to systematically index increases in cigarettes taxes to increases in inflation and GDP growth, instead of the delayed, arbitrary, and partial corrections that have been the norm in the last two decades. However, despite the importance of this policy measure, the implementation was once again partial and halting.

Even the increase in excise tax on cigarettes announced in December 2019 was designed merely to offset the loss of tax revenue from the withdrawal from VAT and NBT, and not as a means of implementing the indexation that was announced as government policy in the 2019 Budget.

This Insight finds that the government could raise an extra 20 billion from cigarette taxes in 2020: if taxes were adjusted in-keeping with the indexation policy articulated in the 2019 Budget, and, if these tax adjustments were applied rationally to all the different brands of cigarettes in the market.

The basis of the indexation approach derives from two basic economic phenomena: they are the existence of income effects and substitution effects in individual consumption decisions. Failing to account for either income or substitution effects can have a negative consequence on the collection of tobacco taxes. Unfortunately, these policy mistakes have been the norm in Sri Lanka’s tax adjustments for cigarettes in the past.

What are income effects, and how do they guide cigarette taxation? 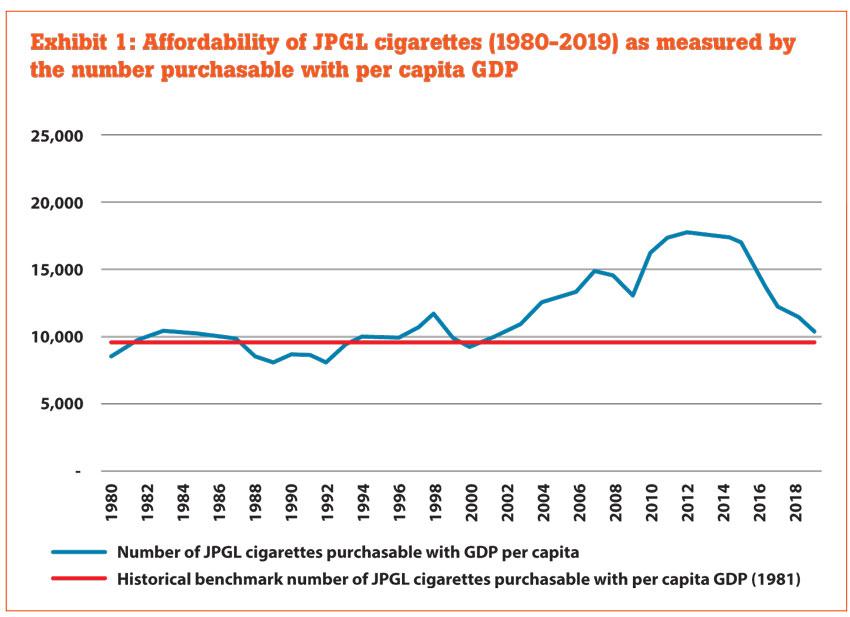 Income effects is the economist’s term for the observation that consumption increases when buying power increases. Buying power can increase through the increase in income, or the reduction in prices. For what economists call “normal goods”, income effects are positive: that is, when buying power increases, you consume more of it. There are some goods that are considered inferior goods, where this might work the other way. For instance, as your income increases, you are likely to buy less bus tickets, as you opt for trishaws and taxis instead.

Buying power has increased for the most bought cigarette: Exhibit 1 shows how the affordability of the most consumed brand of cigarettes, John Player Gold Leaf, denoted as JPGL, has increased over time over the last three decades. It shows that while affordability has reduced in recent years, it is still higher than it was in the two decades between 1980 to 2000, before government policies became lax and allowed affordability to increase. By increasing taxes on JPGL by around Rs. 7.20, assuming an equal increase in price, the government could bring affordability back to those historical benchmark levels.

A connected consideration is the elasticity of the consumer response: how much does consumption decrease when prices increase? Research has repeatedly shown, both in Sri Lanka, and internationally, that the price elasticity for cigarettes is less than 1 – the available research places it at around -0.5.

This means that when prices go up by 10 percent, consumption drops by only 5 percent. Hence, increasing prices always increases total revenue as well – the resulting drop in consumption is more than offset by the increased price. If the price increase is due to a tax increase, it means that total tax collected will also increase despite the reduction in consumption.

Therefore, while health consequences might be the primary reason to increases taxes on cigarettes, and thereby reduce their affordability and consumption; in the present circumstances, the fiscal consequences may be equally important. Because the price elasticity is less than 1, tax revenue will increase when the taxes increase. Applying the tax increase based on the indexation policy articulated in the 2019 budget can increase excise revenue by over Rs. 20 billion. (This estimate is based on 2018 data, as all the data needed from 2019 was not yet available at the time of this Insight going to press).

At a time when the government is anticipating a budget deficit of more than 10 percent of GDP, there are not just economic, but also moral implications, in foregoing revenue that can help support those who have been made even more vulnerable amidst Covid-19 mitigation strategies.

However, solving for income effects alone does not solve the taxation problem. Substitution effects should also be considered; and the above 20 billion calculation is based on implementing the indexation on all cigarette brands, in a manner that addresses the substitution effects as well.

What are substitution effects, and how do they guide cigarette taxation?

Sri Lankan policymakers have allowed strong substitution effects in the cigarette market in two ways.  First, by applying a lower rate of taxation for cigarettes of shorter lengths, so that various cigarette brands can be manufactured at varying price levels. Second, by not applying tax increases across the different lengths proportionately, so that relative price differences between cheaper and more expensive cigarettes are increased.

The cigarette brand that is the market leader, JPGL, and which accounts for more than 80 percent of market share over the last 20 years, is a longer (and therefore more expensive) cigarette. Therefore, if the gap in the price between the different types of cigarettes is increased, shorter cigarettes become relatively cheaper, encouraging consumers to substitute to them, regardless of the negative income effects (by increasing tax and price).

Because shorter cigarettes are also taxed less, the government loses tax revenue due to the substitution effect (as people switch from longer to shorter cigarettes). This phenomenon can be seen in the data over the last two years, as the cigarette manufacturer has also adopted their product and marketing strategies to encourage that switch.

In Sri Lanka, the monopoly cigarette manufacturer has also warned of the substitution to beedi which has been popular amongst lower-income groups in the past. There are two reasons that the concern about beedi might be overstated. First, the consumption of beedi does not seem to be growing in over the last 20 years – perhaps because it is still seen as an inferior product that one would consume only if one were too poor to consume a cigarette.

Second, in any case, as shown in a previous Insight (Who is Responsible for ‘Alternative Facts’ on Cigarette Taxation?”, July 2017), the strongest implication for substitution effects is between the main cigarette brands – from the most expensive to the cheapest cigarettes, since the majority of the market is still consuming a relatively longer and more expensive cigarette.

Government will lose revenue due to substitution to lower-priced cigarettes: The excise tax on the cigarettes that are now promoted as a close substitute to JPGL is only 65 percent of the tax on the JPGL brand. The excise tax on the cheapest cigarette brand is only 37 percent of the tax on JPGL. Therefore, an indexation policy that limits its scope to the most sold (higher priced) brand and fails to take account of the substitution effect, can end up eroding government revenue even while increasing taxes – as was the case in 2019.

To properly eliminate the substitution effect, the excise tax reduction on the cheaper brands should be no more than is warranted by the relatively lower length of those cigarettes. The estimate of 20 billion increased revenue was calculated using this method.

In fact, if Sri Lankan policy makers followed the advice of the WHO, they would move to eliminate the lower-taxed bands without maintaining the substitution effect loophole that can reduce government revenue from the taxation of cigarettes. The National Authority on Tobacco and Alcohol in Sri Lanka has been echoing that advice as well.

As the government prepares to increase borrowing in the midst of a financial and health crisis, the Ministry of Finance in Sri Lanka can improve both the health of the population as well as the health of the economy, by heeding the collective advice of both local and international authorities on this subject.

(Verité Research is an independent think-tank based in Colombo that provides strategic analysis to high level decision-makers in economics, law, politics and media. Comments are welcome. Email publications@veriteresearch.org)