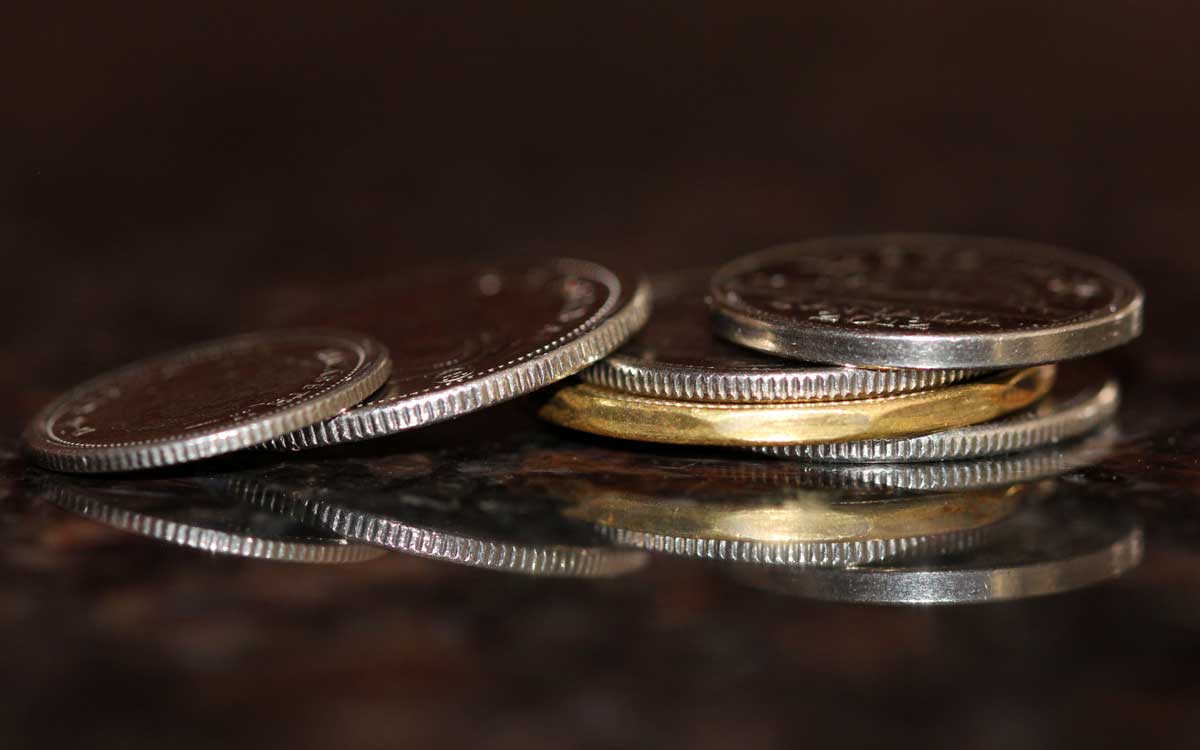 When incomes rise, an increase in tax revenue to GDP ratio should follow

Income, as measured by per capita GDP, is often taken as a measure of the overall level of development of the economy. Countries are categorised as either low income, middle income or high income based on their per capita GDP. Tax revenue as a percentage of GDP is expected to increase as the income level of a country rises. This is because higher incomes and better institutional structures facilitate higher levels of tax collection, which in turn support higher quality public services in more developed economies. A cross country analysis of open-source World Bank data confirms this; Exhibit 1 shows that the proportion of GDP a government collects as tax revenue tends to increase with the increase in per capita GDP. 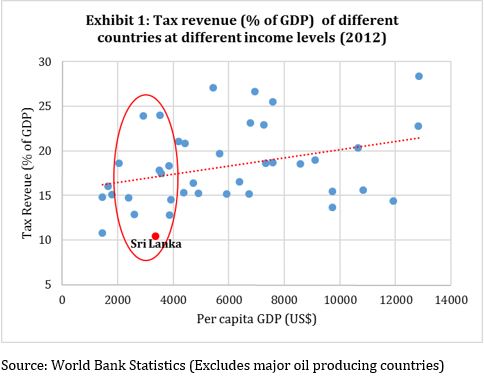 Sri Lanka’s tax collection is moving in the wrong direction

Sri Lanka’s lagging performance in tax collection is a more recent problem as opposed to an inherited one. Since 1990, tax revenue in relation to the country’s GDP has almost halved. At the same time Sri Lanka’s per capita GDP has increased by over seven times (See Exhibit 2). These trends suggest an inverse relationship between the two variables. The expectation, however, as discussed, would in fact have been the opposite. Sri Lanka’s tax revenue to GDP ratio is an anomaly, both in comparison to other middle income countries and its trend over time. 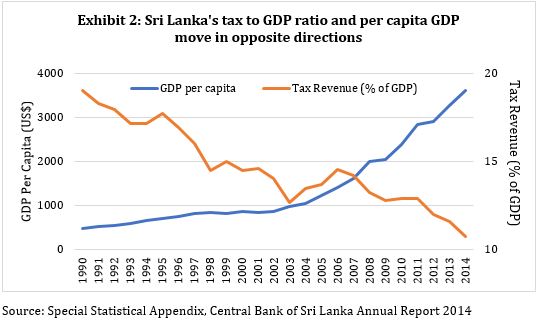 Coupled with its high trade deficit (11% of GDP), Sri Lanka’s heavy dependence on international trade for taxes has proven to be a dangerous gamble for the government. Curtailing imports is necessary to bring down the trade deficit, but will hurt government revenue and worsen the budget deficit. Increasing imports will increase government revenue and ease pressure on budget deficit, but at the expense of a higher trade deficit. Moving away from trade taxes therefore is critical for the government to generate revenue without causing instability in the country’s macroeconomic environment.

Fixing tax administration will have a high positive impact

High taxes on international trade is symptomatic of a weak and inefficient tax administration. A key reason for high dependence on taxes collected at the border is the ease of collecting the taxes via Customs. Excerpts from the 2010 report produced by the Presidential Tax Commission (appointed in 2009 by the then President Mahinda Rajapakse), which has not been made public, also cites weak tax administration to be one of the key factors responsible for falling tax revenue. The problem is further exacerbated by the complex tax structure of the country, with its multitude of tax exemptions and large number of discretionary taxes. Therefore, to diversify revenue sources away from trade taxes and reverse the declining trend in tax revenue, fixing tax administration remains critical.

The Inland Revenue Department’s move to automate revenue collection via the recently launched Revenue Administration Management Information System (RAMIS) is a step in this direction. Systems such as these help create a more efficient and accountable tax environment. However, much more can be done to create an efficient, professional and transparent tax administration. In this regard, the findings of the Presidential Tax Commission Report of 2010 can be a significant starting point.

Georgia provides a good example of how tax revenues can be significantly improved within a short period by reforming the tax administration. According to Transparency International Georgia, widespread tax avoidance and evasion, reflecting state weakness and corruption hindered tax collection up until 2004, and severely affected service delivery by the government. In 2005, the new tax code introduced by the government not only brought down the tax rates, but streamlined procedures and eliminated room for corruption. As a result, tax compliance has greatly improved. Between 2004 – 2011, Georgia’s tax revenue collection improved from being around 10% to around 24% of GDP.
Politically championed notions of increasing the tax base by reducing taxes have not proved effective in Sri Lanka. Repeating the same failed methods are not likely to yield different results. Hence, the case of Georgia gives hope for improvement. By improving the tax administration, Sri Lanka has the opportunity to achieve similar results, which will equip the state with the much needed funds to improve health, education and welfare services; and undertake investments that stimulate economic growth.