The Employees’ Provident Fund (EPF) is the largest single fund in Sri Lanka. In 2017, it held over LKR 2 trillion in employee savings. The EPF is a mandatory retirement savings scheme. This means private sector workers must contribute to the fund regardless of the returns they receive. Therefore, the EPF’s investments and returns concerns both the social security and justice for much of Sri Lanka’s working population.

The EPF’s investments are managed by the Central Bank. Since the initiation of the fund in 1958, it has almost entirely invested in government securities. Yet, from 1998 onwards, the EPF also started investing in equities, mainly via the stock market. Initially, its exposure to equity was minimal, i.e. below 1.5%, However, from 2010 onwards, the EPF increased its equity exposure to over 5% of the fund.

Since 2009, the EPF has taken equity investment decisions that have been severely detrimental to the fund. Concerns raised about the EPF’s management in Parliament from 2013 onward led to restrictions on its equity investments for several years. In October 2018, the Central Bank announced that it would once again expand the EPF’s investments in the stock market.

This Insight shows that the two reasons provided by the Central Bank for doing so, are analytically flawed. Consequently, the retirement savings of workers is under a renewed risk of being compromised.

EPF: A history of losses through equity investments

As at the end of 2018, 7.8% of the EPF’s current fund value is in investments outside of government securities. A detailed overview of the fund’s current position is not available because of the EPF’s poor track record in publishing timely annual reports – they are usually delayed by over 2 years, and the latest annual report available at present is for 2016.

Previous analysis from Verité Research has shown the EPF’s investment in the share-market to be harmful to the worker’s interest. In 2009 and 2010, EPF returns from equity investments were less than 5% while the share market as a whole, as given by the All Share Price Index (ASPI), was achieving a return of around 100%.

Other equity investments by the EPF outside the share market have also been inimical to workers’ interest. For example, in 2010, the EPF, without due process, invested LKR 500 million in Sri Lankan Airlines. As of 2016, this investment has been 100% impaired in the EPF books (that means, it is now valued at zero). Another such example is the EPF’s investment of LKR 5 billion in Canwill Holdings, for the controversial Hyatt Hotel project, in 2013. Both these investments have come under scrutiny in the Auditor General’s Report in 2016.  The same report notes a total impairment loss of LKR 8.1 billion (that is the value written off and lost in the EPF books) from the investments held by the EPF.

As of September 2019, the EPF had a mark-to-market loss of LKR 23 billion on its equity portfolio, with a purchase cost of LKR 83 billion – that is equivalent to 28% loss of the capital invested. According to 2019 Budget Estimates, this amount is equivalent to the cost incurred by the Ministry of Housing to build approximately 46,000 houses.[1] There is no formal audit released to the general public by the Central Bank for the past investment decisions that have compromised the retirement savings of Sri Lankan workers.

EPF’s justification for the investment in equity

It is in this context, of irresponsible investment of EPF funds, and the lack of accountability for those actions, the Central Bank of Sri Lanka (the managing authority), in 2019, once again decided to expand the EPF’s investments in the stock market.

The Central Bank has provided two reasons for this renewed policy: (i) to improve the financial returns to the EPF fund; and (ii) because the EPF’s lendable funds are expected to outstrip the government’s demand for borrowing after 2020.

The present Insight finds both these reasons to be analytically flawed. This then suggests that the Central Bank should seek to be transparent and correct in its reasons to expand its equity investments, and would be well advised to reverse this decision to expand investments in equity markets until it is able to justify the move in terms of worker interests.

There are two ways to set out (using simple terms) the analytical flaw in the claim that investing in equities would allow the EPF to get a higher return than investing in government securities.

Exhibit 1 shows  if LKR 100 was invested in one-year treasury bills and, reinvested together with the year-end returns, every year for the last 25 years, it would have yielded LKR 1,401 at the end of 25 years. However, investing the same amount in the stock market for the same period would have yielded only LKR 613 at the end of the same 25 years. In short, the cumulative rate of return from the stock market is less than half the return from one-year government securities in that 25-year period. Note that this higher return calculated from one-year government securities, in relation to the stock market, is despite one-year securities having lower yields than longer-duration securities, which the EPF would usually purchase.

The second way to set out the analytical flaw is to evaluate the risk-adjusted return of the stock market around the specific high-performance periods. Since every performance period other than the 20-year period had a higher return from government bonds, which also had a higher risk on the stock market, only the 20-year period merits further evaluation.

Exhibit 1: Value of investment in Share market and Government Securities, 1994- 2018 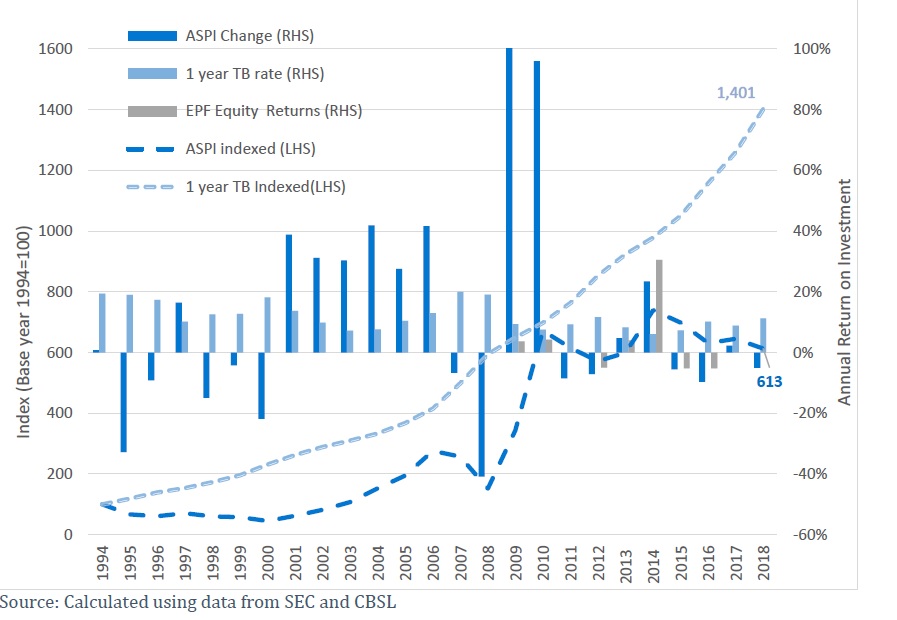 Parameters used for the calculations in Exhibit 1.

The second explanation by the Central Bank, for moving again into the stock market, is captured in the following quote, from the Monetary Policy Briefing in October 2018 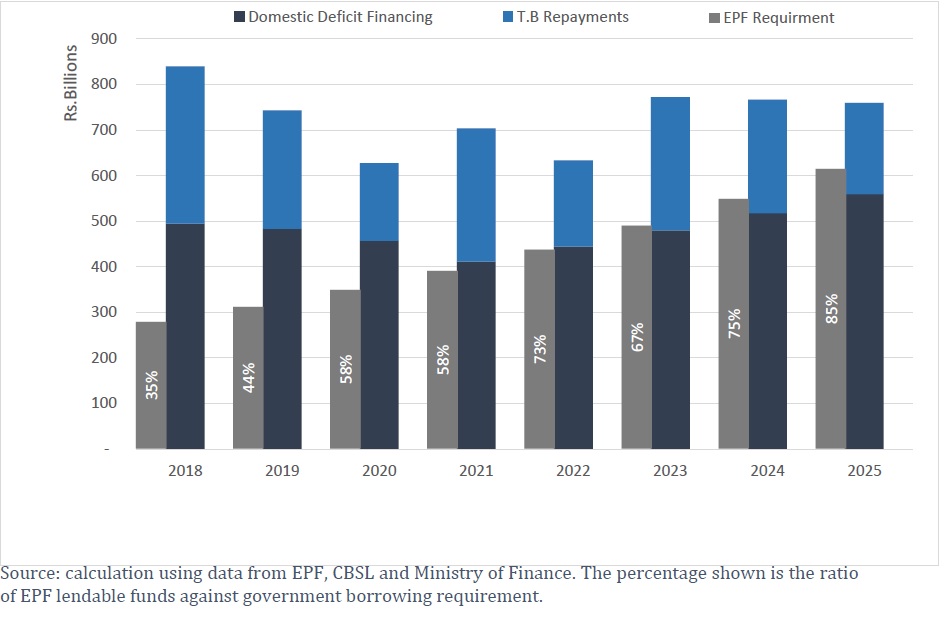 Parameters used for the calculations in Exhibit 2.

This claim is also analytically flawed. The Central Bank claim, quite inappropriately, ties the borrowing requirements of the government to the maturity of existing government debt. It fails to recognise the requirements that arise from future budget deficits. Exhibit 2 shows that the government’s borrowing requirement available to the EPF exceeds the EPFs increase in lendable funds for the foreseeable future. This based on adding only what the government has projected to be domestically financed from the optimistically projected Budget deficit, and the maturing domestic debt that is not owned by EPF, and not considering the refinancing of foreign debt.