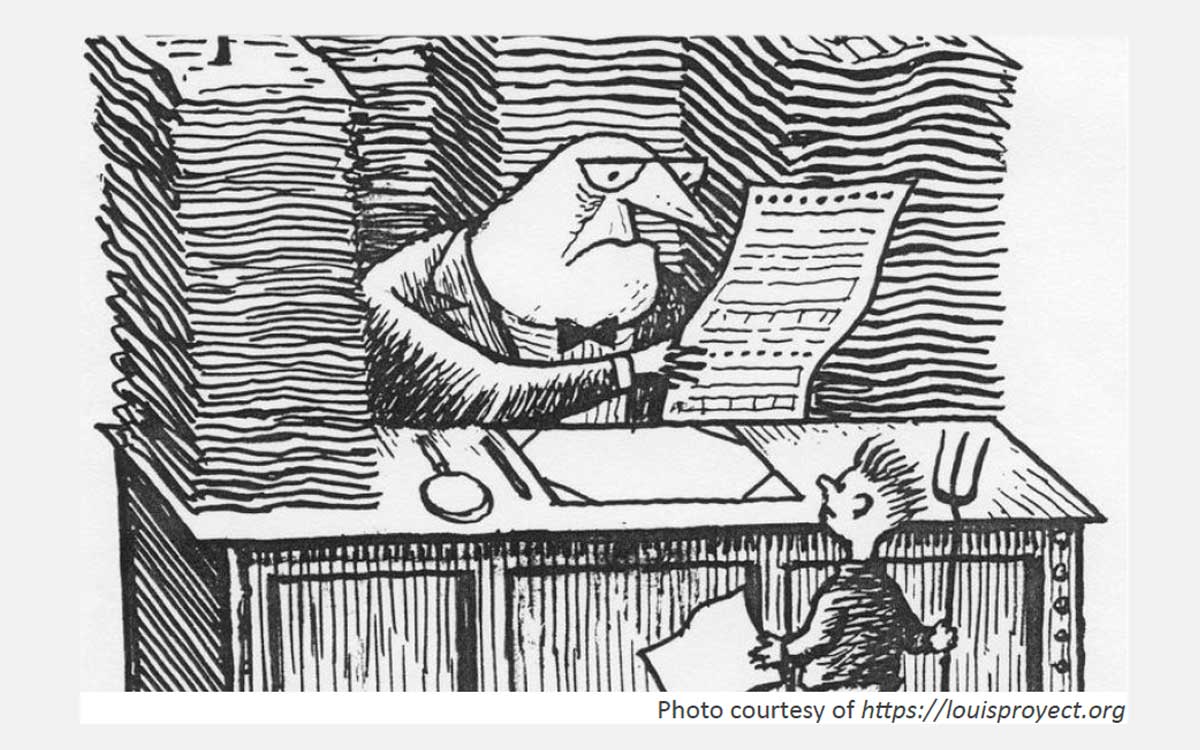 If we thought of a government Ministry as a self-driving car, a Cabinet Minister is akin to the one that gets into the front seat and punches in the intended destination. All the technology, the sensors, the navigation system that decides the best route and then makes a myriad of adjustments on the way to reach the destination safely and quickly – this is akin to the work of the Bureaucracy. The Minister in the front seat, however, can create some serious problems by punching in the wrong destination or manually overriding some of the actions. But, like the anti-locking brakes and automated traction control systems of modern vehicles, a well-functioning Bureaucracy understands how to limit and manage this risk and mitigate its impacts. This analogy raises an important question: is it only the Ministers that can stall governance in Sri Lanka or does the Bureaucracy have a role to play as well?

This Insight suggests that the problems of Sri Lanka’s economy cannot all be blamed on the poverty of its politics alone. The poor state of the Bureaucracy is a more serious problem than it is perceived to be and Sri Lanka has not yet figured out how to make its Bureaucracy more accountable. The present Insight will illustrate the issue by looking at the information problem faced by exporters in the agricultural sector, utilising research and an audit done by Verité Research.

Ministers have Prioritised Agriculture and Exports

The agricultural sector employs over 25% of Sri Lanka’s labour force, and accounts for 23% of its exports. Hence, measures to improve performance of the sector can contribute to both incomes of the people and export earnings of the country. The sector’s growth has also been a long-standing priority of successive governments, including the Sirisena-Wickremasinghe-led Cabinet. Similarly, the Cabinet has reinforced the policy orientation of previous governments towards increasing Sri Lanka’s exports as a share of GDP. However, Sri Lanka’s actual performance has not only remained weak, but has also worsened instead of improved. In the last six years, agriculture’s contribution to GDP has remained stagnant at under 8%. In the same period, exports declined consistently from 16.2% in 2011 to 12.7% in 2016.

The Information Problem of Agricultural Exporters

In Sri Lanka, there are about 21 key government agencies and 23 key legislative Acts that govern the export and import of goods. These Acts further outline a host of regulations published under these Acts administered by a multitude of government agencies. Difficulty in finding timely and reliable information about these regulations and compliance procedures is a significant barrier to trade.
This is especially true of agricultural products, which are generally subject to more stringent regulations to ensure the safety and quality of the products traded.
The limited availability of accurate and timely information increases both the cost and time of compliance. The lack of information and resulting delays in getting the cargo cleared are costlier for agricultural products, most of which are perishable in nature and require quick turnaround times to preserve the quality and commercial value of the product. The smaller exporters could be the most disadvantaged. Further, lack of information can result in non-compliance with regulations, risking the health and life of the people and environment of the country.
Such situations have a significant impact on a country’s trade competitiveness. They also create opportunities for corruption by public administrators who offer desperate traders the option of side-stepping formal procedures and requirements in return for side-payments. But when products from Sri Lanka reach its export destination without due compliance, the whole country gets black-listed.

Almost all trade-related agencies in Sri Lanka have their own websites. Websites are a convenient, low cost and elementary medium for government agencies to share information. They have a significant advantage over other modes of public communication – they are accessible from anywhere at any time and hence overcome time and geographical barriers. This instant and convenient access is especially beneficial to small and medium industries and businesses located outside Colombo, who would otherwise have to visit offices in person to obtain the necessary information. The increased transparency of online information will help increase compliance and reduce room for obfuscation and corruption.
It is an elementary responsibility of the Bureaucracy to make the necessary information easily accessible to exporters using these existing websites. Given the high strategic importance of increasing exports this simple function should be a high priority. Verité Research undertook an audit of agencies involved in the export and import of agricultural products (importing agricultural inputs is closely connected to exporting agricultural products). The audit conducted by Verité Research (see Table 1) shows the Bureaucracy to be failing by a large margin. 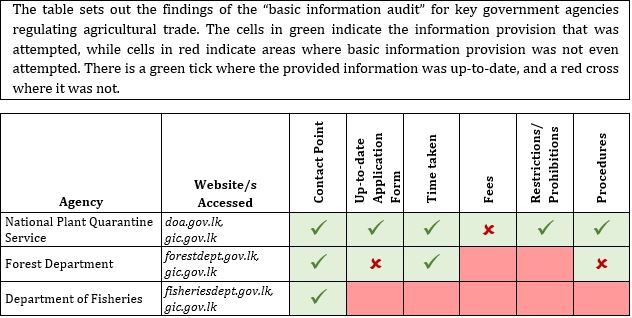 Analysis of the Information Audit

The audit revealed that while most of the government agencies had websites, the information on the sites was limited and frequently outdated. This was true of even basic information such as contact details, application forms, procedures, fees and timelines (see Table 1 for details and Table 2 for analysis).

Table 2 shows that only just over half of the required information was attempted either through the individual agency’s website or on the Government Information Centre website (gic.gov.lk); and of the information attempted, one-third was out-of-date and not usable.
Overall, of the 42 data basic data points audited, only 38% of the required information was both attempted and up-to-date (accurate) via government websites. The remaining 62% can only be obtained by either physically visiting the premises of the respective agency or via phone call, provided the correct contact details were available or known to the exporter/importer.

The Solution, As Directed by Ministers (Politicians)

Recognising the information problem faced by traders, the Ministers have ventured to attempt a solution: it is called a National Trade Information Portal (TIP). A TIP can overcome information barriers by providing access to all relevant trade rules, regulations, procedures, fee schedules and forms applicable to all border management agencies via a single user-friendly online platform.
TIPs are a response that have been deployed by many countries such as Bangladesh, Myanmar, India and Cambodia to the answer the information problems traders face in relation to the host of regulations that they must comply with when exporting or importing. In its 2017 Budget, the government announced its intentions to catch up with its neighbours and establish a TIP.
However, Sri Lanka’s policy history suggests that good solutions and legislation tends to fail when the larger problem of solving bureaucratic lethargy and accountability is not taken seriously.

“Good Solutions” Fall on the Sword of a “Poor Bureaucracy”

The National Trade Information Portal is not the first initiative of the government at unifying information on a single platform. In 2007, Sri Lanka Customs launched the Customs Regulatory Database with the assistance of USAID. The database was expected to resolve the difficulties faced by Sri Lanka Customs and the trading community in locating applicable rules and procedures under the paper-based system.

Housed under The Competitiveness Program (TCP), significant effort was spent in collecting, classifying, and digitising information on laws, regulations, and Customs procedures. The information was made available on this comprehensive online searchable database via the Sri Lanka Customs website (customs.gov.lk). A trader or Customs official with internet could access the necessary trade regulations and procedures and obtain guidance on exporting/importing a specific good identified by its Harmonised System (HS) code. Despite its usefulness, no initiative was taken to maintain and update the database, eventually rendering it redundant. This database is now no longer functional.

The experience of the Customs Regulatory Database is a cautionary tale for the proposed TIP. Setting up a complex and demanding TIP does not address the deeper cause of Sri Lanka’s information problem – a poorly-functioning Bureaucracy that provides less than 50% of even the most basic information needed for agriculture traders on its existing websites.