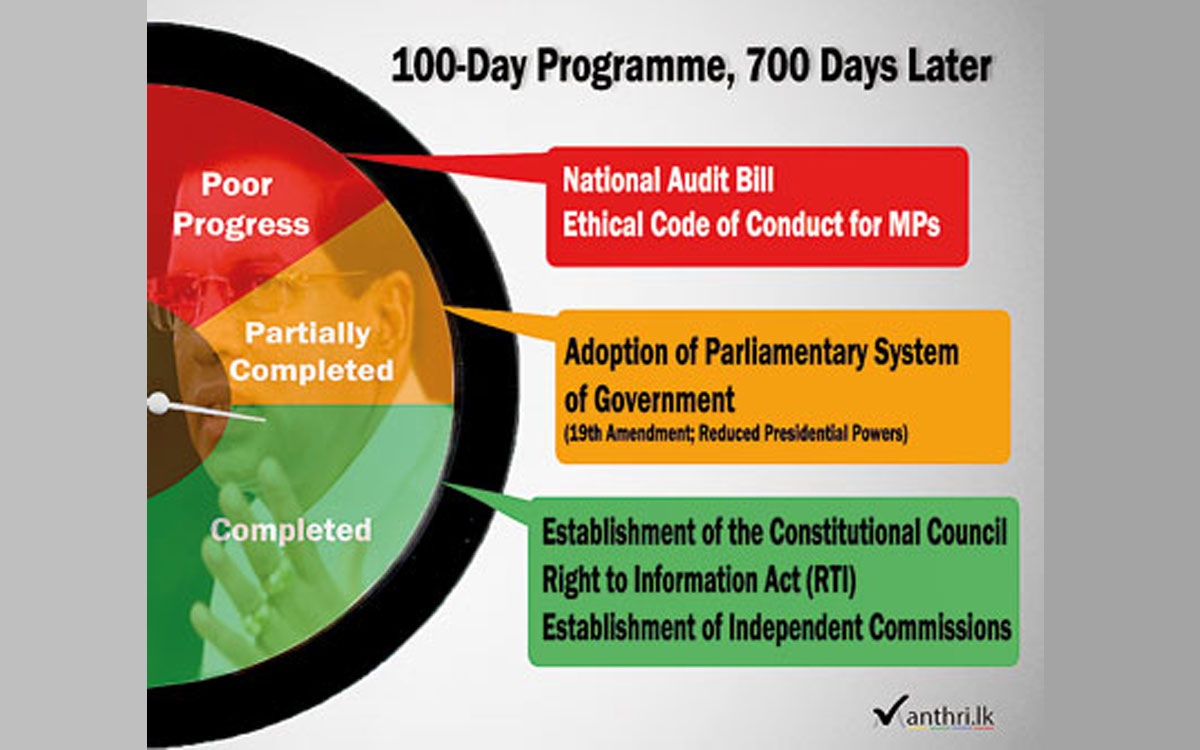 Manthri.lk, a website dedicated to monitor the performance of Parliamentarians, under an initiative of Verite Research, has given a score of 71% to the Maithripala Sirisena administration, based on its latest assessment on the promises fulfilled in terms of the Government’s first 100 Days programme.

The report states that, despite failures to fulfil several of the 100-Day programme pledges, notable progress has been made with regard to key promises, such as the introduction of a Right to Information (RTI) Act and the setting up of Independent Commissions. Following is the full report:

Maithripala Sirisena was sworn in as the 6th Executive President (EP) of Sri Lanka on January 9, 2015. President Sirisena’s campaign was driven by the promise of a 100-Day Programme that pledged short-term relief and long-term structural reforms. The promises made were to be completed by the 100th day of President Sirisena’s tenure. Although many of these promises have now been fulfilled, certain key promises remain incomplete, 730 days later.

The Maithrimeter on manthri.lk(see – http://www.manthri.lk/en/maithrimeter), a Parliamentary monitoring initiative by Verité Research, created a weighted system to measure the progress made under the 100-Day Programme, scoring ‘100 days out of 100’. While scoring less than 50 at the 100-day mark, many promises such as the passage of ‘RTI’ Act were eventually fulfilled, increasing the total score to 71.

This is in part because some promises, including the campaign’s central promise of abolishing the EP (addressed in part through the 19th Amendment to the Constitution), remain within the ongoing Constitutional reform process. However, two key promises- the National Audit Bill and the Ethical Code of Conduct (ECoC) are notable delays.

According to President Sirisena’s manifesto, the introduction of the National Audit Bill, with the intention of enhancing the mechanisms of State financial oversight, was scheduled for February 19, 2015. Additionally, the introduction of the Bill was also a manifesto promise of both major Parliamentary coalitions (the United National Front for Good Governance and the United People’s Freedom Alliance) of the ruling National Unity Government. However, progress pertaining to this pledge has been limited to the approval of the draft Bill by the Cabinet of Ministers. The Presidential campaign manifesto also promised the introduction and adoption of a legally enforceable ECoC for members of Parliament. After an extended delay, the finalised copy of the “CoC for MPs” was tabled and presented for approval to the House by Speaker Karu Jayasuriya, on December 10, 2016. Nonetheless, the draft CoC presented to Parliament is limited in its scope to ensure an enforcement mechanism, and falls short of the actual pledge. The adoption of a CoC was originally slated for February 2, 2015.

Despite these shortfalls, notable progress has been made with regard to pledges such as the introduction of the RTI Bill, establishment of: (a) Commissions to investigate corruption, (b) Independent Commissions and (c) Constitutional Council, and the adoption of a National Drugs Policy. Among the successes, the passage of the RTI Act in Parliament on June 24, 2016 and the establishment of the RTI Commission is a highlight. The purpose of the Bill is to provide for the right of access to information, with the intention of increasing transparency and accountability.

Overall, achieving completion on the now long elapsed 100-Day Programme, will depend on two factors. First, progress on abolishing the EP System and adopting a new Electoral System, remain tied to the outcomes of the Constitutional reform process. Second, progress can also be achieved through the simpler but, highly significant,‘good governance’ promises; the National Audit Commission (through the Audit Bill) and the legally enforceable CoC for MPs, both of which remain pending, two years into President Sirisena’s government.

Manthri.lk is a pioneering trilingual website which profiles the actions and activities of each of the 225 MPs in Sri Lanka. As an MP-monitoring scorecard, Manthri.lk recognises the need for accountability between MPs and their electorates. In doing so, it seeks to promote transparency and good governance to improve Sri Lanka’s democratic framework.