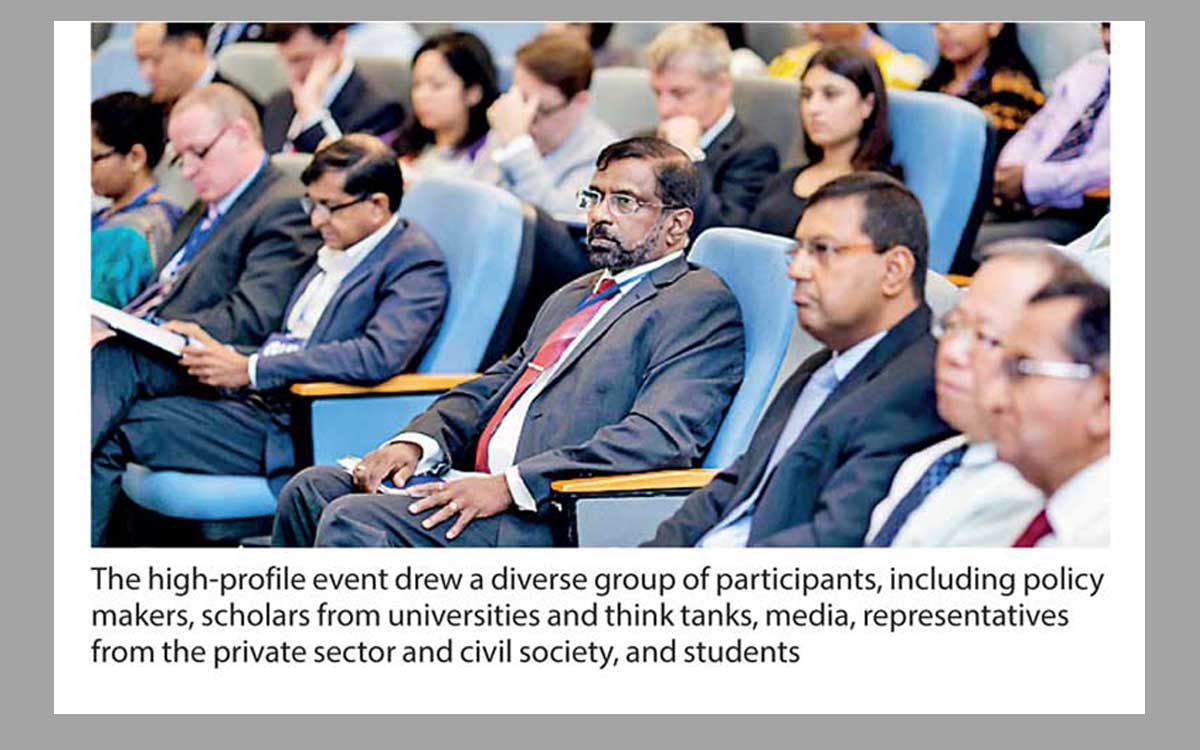 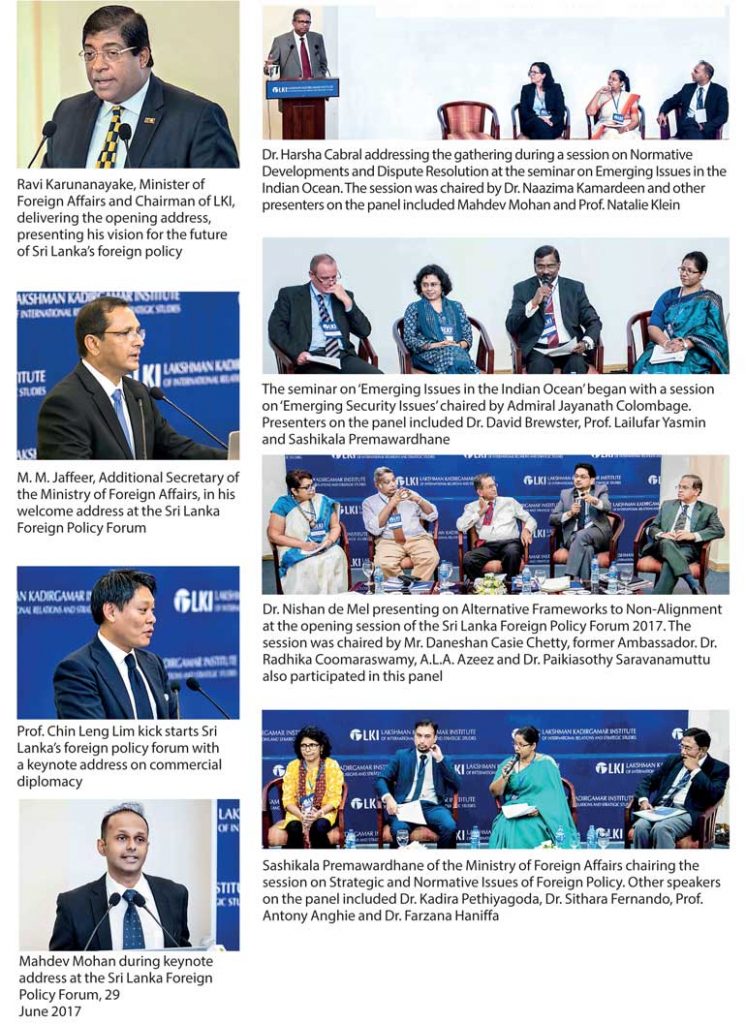 A landmark dialogue on the theme of ‘Sri Lanka’s Foreign Policy: Choices in a Changing World’ was recently held at the Lakshman Kadirgamar Institute of International Relations and Strategic Studies (LKI). The two-day event drew established experts and new voices to examine Sri Lanka’s foreign policy, and present ideas and recommendations for its future.

The event began with a seminar on ‘Emerging Issues in the Indian Ocean’, supported

by Hemas Holdings PLC, which presented the regional context of Sri Lanka’s foreign policy. It was followed by the ‘Sri Lanka Foreign Policy Forum’, where experts examined frameworks of Sri Lanka’s foreign policy, and the roles of key actors – including the Foreign Ministry, international organisations, media, and the private sector. The distinguished panels of speakers also offered their insights on issues of energy security, trade and investment, geo-economics, maritime security, human rights, and international law.

Ravi Karunanayake, Minister of Foreign Affairs and Chairman of LKI, delivered the opening address, presenting his vision for the future of Sri Lanka’s foreign policy. He stated that, “Sri Lankan foreign policy must prioritise commercial diplomacy, take a clear stand for values that are in its long-term interest and embrace – not fear – digitalisation and the millennial generation.”

Speaking at the seminar on ‘Emerging Issues in the Indian Ocean’, Mahdev Mohan, Assistant Professor at Singapore Management University and Nominated Member of Parliament in Singapore, observed that Sri Lanka’s attempt to craft a dual identity as the centre of the Indian Ocean and a gateway to India would give it a competitive advantage – since it was a space that nobody had had the chance to exploit just yet.

Prof. Chin Leng Lim, Choh Ming-Li Professor-elect at the Chinese University of Hong Kong kicked off Sri Lanka’s foreign policy forum with a keynote address on commercial diplomacy. He cautioned against seeing Singapore’s model of economic diplomacy as easily transposable to other states, and recommended that states like Sri Lanka could opt for the ‘Hong Kong solution’ in such circumstances – which was to distinguish itself from what’s around – as Hong Kong and Dubai have both done.

During his presentation on ‘Traditional Security & Great Power Interests in the Indian Ocean’, Dr. David Brewster, Senior Research Fellow at the Australian National University, argued that China faced ‘strong imperatives’ to promote freedom of navigation and a rules-based order in the Indian Ocean, and that countries in the region should think of ways to leverage those imperatives to their advantage.

Presenting on a panel on ‘Emerging Security Issues’ Sashikala Premawardhane, Director General (Actg), Ocean Affairs, Strategic Security and Policy Planning at the Ministry of Foreign Affairs stated that there appeared to be resistance towards the idea of one country strategically dominating the Indian Ocean, due to the region’s historically multipolar nature as well as the tendency of regional countries to avoid joining power blocs.

Dr. Paikiasothy Saravanamuttu, Founding Executive Director of the Centre for Policy Alternatives, also shared his thoughts, and was emphatic that Sri Lanka’s goal to become the ‘centre of the Indian Ocean’ could not succeed as long as Sri Lanka continues to have a ‘schizoid relationship as far as India is concerned’.

Commenting on Sri Lanka’s export performance, Dr. Ganeshan Wignaraja, Chair-Elect of the Global Economy Programme at LKI stated that Sri Lanka’s performance had actually been bucking the regional trend of a slowdown in exports, and that the restructuring of the Chinese economy could create new economic opportunities for Sri Lanka.

The high-profile event drew a diverse group of participants, including policy makers, scholars from universities and think tanks, media, representatives from the private sector and civil society, and students. In explaining the aims of the event, LKI’s Executive Director, Dr. Dinusha Panditaratne, stated, a primary objective was “to consider how Sri Lanka’s foreign policy might synthesise the new international order on the one hand, with the context of its domestic order – post 2009, and post 2015 – on the other.” LKI will be publishing a summary of the proceedings, along with an edited volume of papers from the foreign policy forum.

LKI is a think tank that analyses Sri Lanka’s international relations and strategic interests, to provide insights and recommendations that advance justice, peace, prosperity, and sustainability. The institute reflects the vision of the late Lakshman Kadirgamar by promoting the country’s intellectual profile in foreign policy research and engagement.