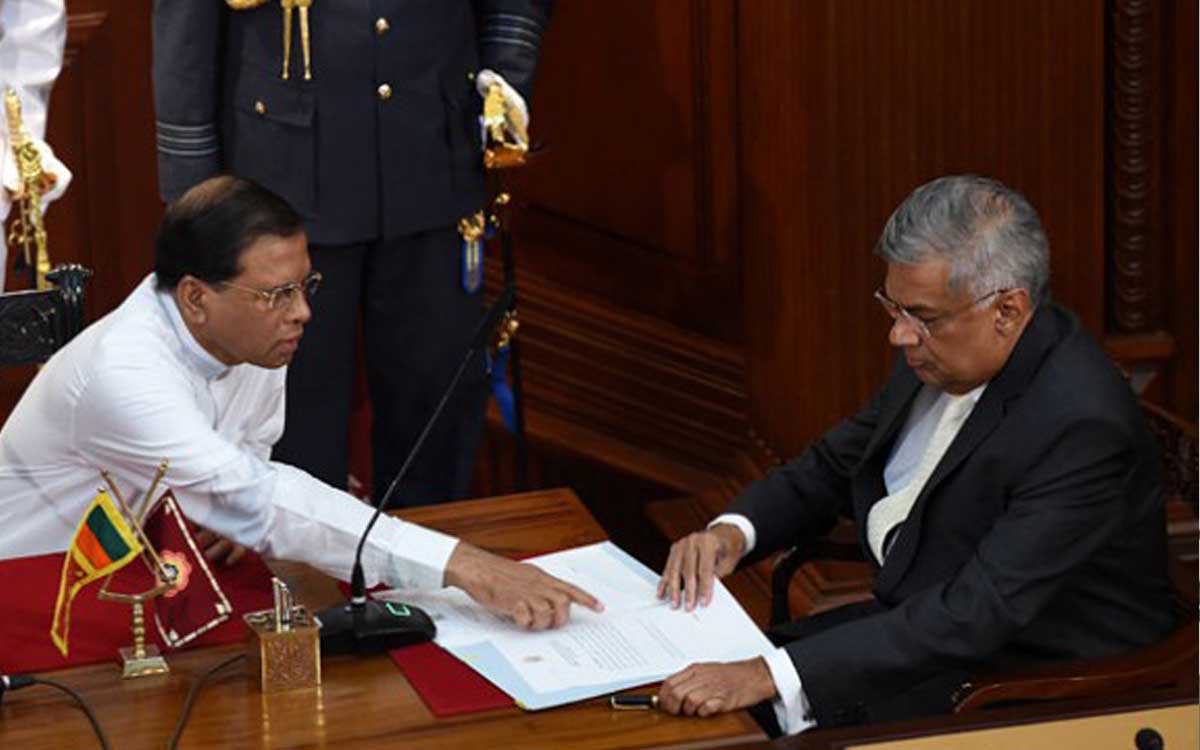 https://assets.roar.media/Life/2015/01/a> only spoke of amendments to the existing constitution. In the Parliamentary election that followed in August of that year, the UNP reiterated its promise of a brand new constitution in its own manifesto.

Two years later, the two constituent parties of the Yahapalana Government, the Sri Lanka Freedom Party (SLFP) led by President Sirisena and the United National Party (UNP) headed by Prime Minister Ranil Wickremesinghe, seem unable to reach a consensus on how to move forward. The parties differ greatly on particularly contentious issues such as the executive presidency, devolution of power, and the unitary character of the country. Sirisena has on occasion madereference to a “new” constitution though his party has steadfastly maintained that it will not be in favour of any amendment that will require a national referendum. (Repealing the existing constitution and replacing it with a new one will require a referendum).

The Mahanayaka Theras have made their feelings known about the proposed new constitution. How much of a say do they have? Should they be consulted?

How much of an influence would Sri Lanka’s Buddhist prelates have on constitutional reform? Image courtesy president.gov.lk

Earlier this month, the Buddhist prelates announced a unanimous decision to oppose the establishment of a new constitution in Sri Lanka. In response to this, President Sirisena met with the chief incumbents of the three chapters and assured them that they will be duly informed if and when formulating a draft for a new constitution.

At his meeting with the prelates, the President had reportedly agreed with their proposal that Articles 2, 9, and those provisions regarding Police and land powers under the 13th Amendment to the Constitution should remain intact. This means Sirisena is for preserving the unitary character of the state and also wishes to grant Buddhism the foremost place among the many religions currently practised in Sri Lanka, as already guaranteed by the 1978 Constitution.

Legal expert and Research Associate at Verité Research Viran Corea speaking to Roar explained that while consulting the prelates is in and of itself not a bad thing and could even be necessary, the Government ought to ensure that they are not the only ones consulted and that the views of all material stakeholders (all communities—ethnic and religious) are given due weightage in a truly egalitarian (as opposed to majoritarian) approach.

“As a rule, one of the key functions of a good and durable constitution is its ability to protect minorities from majoritarianism of any hue. Therefore, the consultation of the Mahanayakas is very good, as long as undue weightage is not given to their views. In order for the approach to be egalitarian, it is also necessary to consult in all earnest, not just different groups, but also as may be needed, significant diverse strands (sub-groups) within each of them. For example, the Cardinal does not represent or speak for all sub-groups of the Christian community of Sri Lanka,” he said.

What about other community leaders and their input?

This understanding is needed, Corea went to say, because a durable constitution must represent a blend of cross-communally accepted aspirations of all Sri Lankans.

The question, he said, is not so much what the consultation of the Mahanayakas means, as it is what the feedback of all community leaders (including the Mahanayakas) indicates is needed, when viewed through an egalitarian lens.

Corea believes that a government elected by all communities owes the polity due consideration of the views and key concerns of all communities. Hence, quite correctly, he says, the Government has expressed recognition of a duty to proceed on such basis, considering the aspirations of all people of Sri Lanka.

The SLFP stubbornly clings to its position of not going for a referendum. How will the Unity Government move forward, given this reality?

Minister Mahinda Samarasinghe says the SLFP does not think a referendum is necessary. Image courtesy dailynews.lk

Sri Lanka has only ever held one national referendum, and that was in 1982, to decide whether the life of the Parliament should be extended by six years. Called for by then President J. R. Jayewardene, the referendum saw over 54% of the country voting ‘yes’. Now, that there is talk of a brand new constitution, the need for a national referendum is also being discussed. Last week, Ports and Shipping Minister Mahinda Samarasinghe (SLFP) told this reporter that the party remains opposed to reforms requiring a referendum.

“We don’t think a referendum is necessary. We still haven’t put forward the party position. Nor has the UNP. We’re in the process of consulting civil society—various sections of civil society—after which we will come to a consolidated position which we shall put forward,” he said. At the weekly SLFP press conference, the Minister also said that the Government was open to considering any input of the Mahanayaka Theras.

Does the SLFP’s stubborn opposition to a referendum mean the Unity Government will soon hit a snag in their reform project?

Says Corea: “Opposing an amendment on the basis of requiring a referendum alone, doesn’t make sense. The first question to ask, is why a referendum is fought shy of. The decision as to what should be included in a constitutional reform package should be made by the people’s elected representatives through a two-thirds majority and if any necessary aspect requires a referendum in addition (as a legal requirement), then people must be properly educated so that they can make an informed choice in exercising their sovereign right.”

Corea believes that the process need hit a snag only if necessary reforms are resisted largely on the basis that a referendum is required, rather than on whether those reforms are good or bad for the people.

“If all key political actors work towards the ‘end’ (inclusive constitutional reform) rather than dither over ‘means’ (referendum), the process stands a better chance of success, provided the right communication strategies are adopted to enable duly informed people’s choice,” he told Roar.

The UNP is uncharacteristically upbeat about what lies ahead. Are they overestimating things?

Meanwhile, the UNP is all set for a new constitution—if Deputy Minister Ajith P. Perera is to be believed.

“There is no point of making Constitutional amendments because the Constitution has been amended so many times. Instead of amendments, the Government has decided to bring a new Constitution. The new Constitution would be brought only with the Parliament approval and peoples’ mandate at a referendum,” he toldjournalists this week.

Premier Wickremesinghe himself said on Thursday (July 13) that the Steering Committee of the Constitutional Assembly will release its report “soon.”

“It has taken us nearly one-and-a-half years for the steering committee of the constitutional assembly to decide on writing a report. That one-and-a-half year wait is worth it because we are putting [the report] out soon,” he was quoted as saying.

Corea has no insider-information on the UNP’s position, but says he has observed from the public position taken, that the UNP seems intent on working towards whatever is needed for all people of this country to embrace the opportunities that the Asian Century should hold for Sri Lanka, if her people are astute enough to defeat the pettiness of multiple insularities.

“However, I might add that it is imperative that the correct communication strategies are deployed, to ride over insularity bumps and help the people decide wisely for everyone’s sake,” he said.

Does the public really know what’s going on?

According to a recent survey, 20% of Sri Lankans are undecided on the issue of constitutional reform. Image courtesy srilankaguardian.org

Public opinion, meanwhile, seems to be divided. According to researchcarried out by the Centre for Policy Alternatives (CPA) in October 2016, 33.9% of Sri Lankans surveyed have said that they are for a new constitution, while 36% believe the existing 1978 Constitution should be kept with some amendments. Interestingly, 20% of Sri Lankans are undecided on the matter.

According to the CPA report:

Support for a new Constitution is highest in the North Central (45.7%), North Western (41.8%) and Western (37.6%) Provinces while almost 50% of respondents in the Northern Province believe that the current Constitution should continue but with some needed changes. On the question of completely abolishing the Executive Presidential system, a key election promise of the Yahapalanaya Government, Sri Lankans are once again divided with 35.7% supporting the complete abolition of the Executive Presidential system and 40.3% not supporting it. 24% said that they do not know whether they support it or not. Support for complete abolition is highest in the North Central (48.6%) and Sabaragamuwa (44%)Provinces while around 50% in the Southern and Eastern Province stated that they do not support it. Almost 50% from the Central Province remain undecided.

Reports are on the way. What’s next?

As mentioned above, the Steering Committee’s report will soon be made public. The reports of the six sub committees have also been submitted, according to Minister Samarasinghe.

Asked if there is anything in the contents of these reports that stands out, Corea said: “The work of the committees has covered a wide range of areas, as may be expected in a constitution-making exercise. Many people with diverse views and different concerns are seen striving to arrive at common ground on several important matters. This is a salutary feature of the process. It is the fact of a continued commitment to a collaborative constitution-making process in the teeth of toxically insular opponents, that stands out.”

The coming weeks will prove crucial to the constitution-making process, judging by the various pronouncements made by different stakeholders on different fora. Stay tuned to Roar for the latest updates.