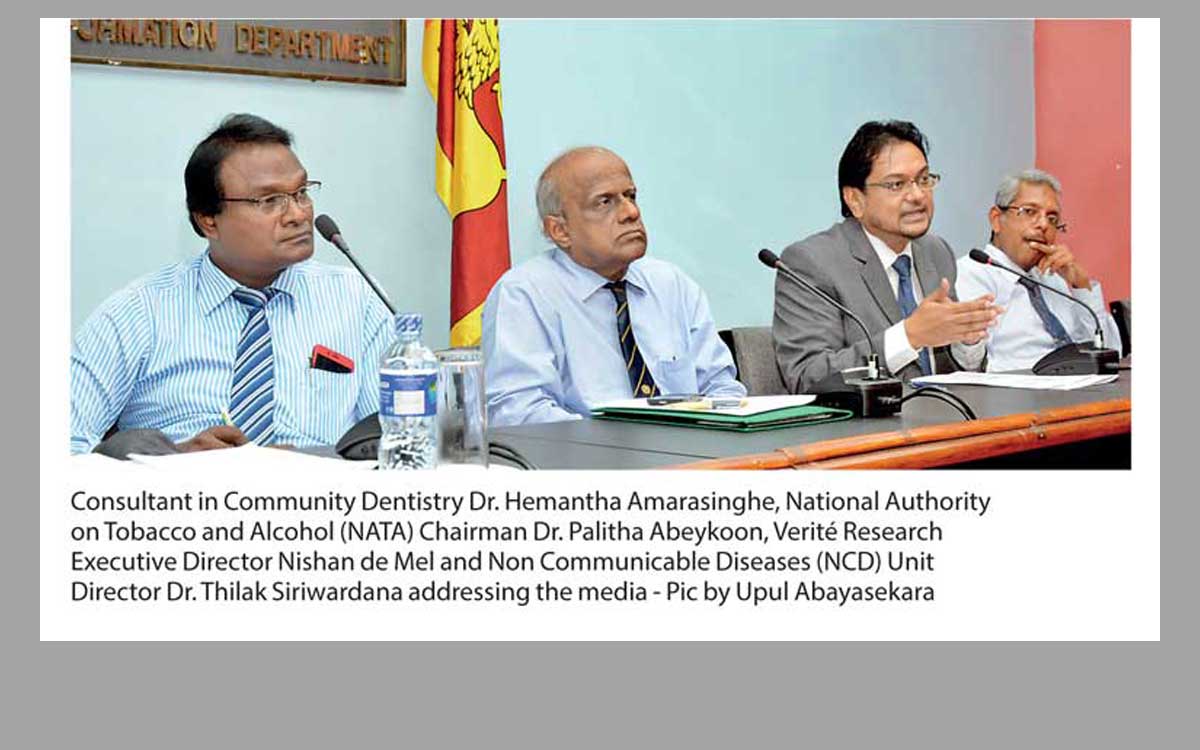 The National Authority on Tobacco and Alcohol (NATA) yesterday called for a price formula to be implemented on cigarette price determination and improved transparency in policy formulation by the Finance Ministry to mitigate undue influence by the tobacco industry.

Pointing out that the Finance Ministry has been wrong at three different points in deciding prices and the tax imposed on cigarettes, giving the Government contradicting advice, NATA Chairman Dr. Palitha Abeykoon said that regulations should be in place to prevent the industry from imposing undue influence on officials.

“According to the framework convention on tobacco, if there is any consultation with the tobacco industry by the Finance Ministry then it has to be on record. There should be minutes accessible. This should be implemented. We do not have any face-to-face consultation and we have not been present at any of the meetings conducted by the Finance Ministry and tobacco industry either,” he said, speaking at a press conference held at the Government Information Department. Abeykoon said that Finance Ministry officials may have been influenced to give wrong advice or projections to the Government by the industry.

“This is not a unique situation for us and that is why the convention has introduced these firewalls,” he explained, adding that the ministry projections had been wrong on three counts.

The ministry first advised the Government not to increase taxes, explaining that the hike in price would reduce demand drastically resulting in a revenue drop. However, NATA has projected that although demand will drop due to an increase in prices, revenue will still continue to rise at a lower rate. This opinion was dismissed, said Verite Research Executive Director and Head of Research Nishan De Mel.

The ministry then projected a 46% revenue increase following an increase in taxes, while NATA only projected a 20% increase in Government revenue due to a drop in demand following tax increases. During the first half of this year the Government has earned revenue of Rs. 51.96 billion from tax on cigarettes. Taking the trend into consideration, researchers estimate extrapolated revenue of Rs. 103.8 billion for the 2017 financial year. This number is closer to the projection given by NATA at Rs. 104.5 billion, compared to the Finance Ministry projection of Rs. 126.8 billion for 2017.

“The projections by NATA have been more accurate than that of the Finance Ministry. First they said the revenue would drop due to a drop in demand if taxes are increased. Then they said demand would remain the same even if the tax is increased and projected high revenue. On both accounts they have been wrong. They are making a third mistake now; after giving unrealistic revenue estimates, they are claiming that an increase in taxes has had an adverse effect on Government revenue,” De Mel said.

Further, he said that there is a considerable reduction in consumption in cigarettes following tax increases. Furthermore, according to consumption research, beedi has remained the same during the last few years, Abeykoon said. This is in addition to the drop in the consumption of tobacco among schoolchildren. A recent survey has showed that the number has dropped from 4% to 2%.

Abeykoon also stressed that increases in prices should be at a higher percentage for cheaper cigarette brands in the market to ensure that the hike does not just result in the consumer switching to a cheaper brand. He also added that the price of beedi should also increase accordingly.

“The price of an expensive brand should increase at a lower percentage but the price of the cheaper brand should increase at a higher percentage. Although there was a lot of discussion that the consumer will switch to beedi when the price of the commonly consumed brand is too high, in reality what happens is that they switch to the cheaper brand which does not have a filter. It is when the consumer cannot even afford that that they will switch to beedi. In most cases they won’t do that, but give up smoking,” De Mel added.

Abeykoon added that even according to tobacco companies’ analysis, the buying power of consumers has increased. “This means there is more room for price hikes,” he said.