Fate of over half of 2017 budget promises unknown: think tank 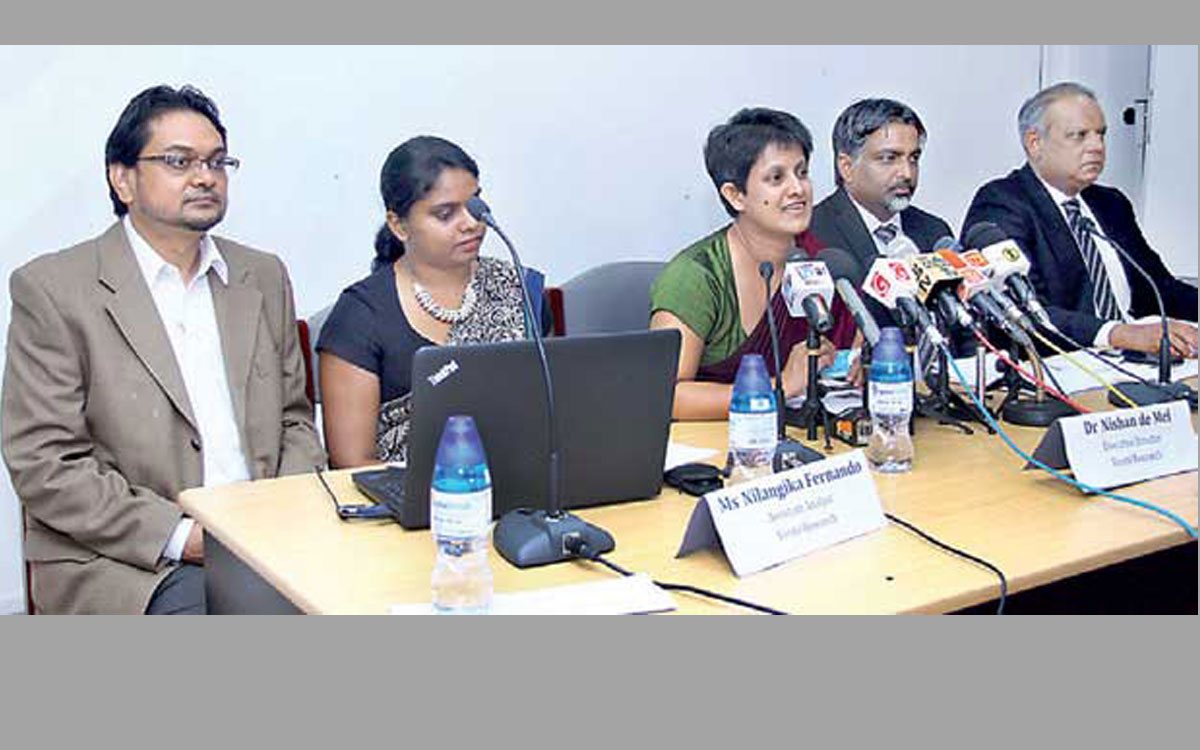 Just 3 percent of the brand new, large expenditure promises in the 2017 budget were on track or ahead of schedule at the end of the first half of this year, and the government has failed to provide information on more than half of the promises, according to the Colombo-based think tank VeritéResearch. “Halfway through the year, we don’t know what 51 percent of our largest proposals have been doing, and 51 percent means Rs.67 billion of unknown information. We don’t know where this money is going. It could already be implemented through the proposals, or it could have been taken away from the proposals,” Verité Research Assistant Analyst Nilangika Fernando said.

Parliamentary Committee on Public Finance Member Professor AshubodhaMarasinghe who spoke during the media briefing revealed that the ministries which had not disclosed information had only implemented 50 percent of the proposals.

Just 3 percent of the brand new, large expenditure promises in the 2017 budget were on track or ahead of schedule at the end of the first half of this year, and the government has failed to provide information on more than half of the promises, according to the Colombo-based think tank

“That means, there has only been progress with 50 percent of the funds allocated and sent to these ministries from the Finance Ministry, so this is a problem. There have been various interpretations on whether this is due to the inefficiencies of the officials or the inefficiencies of the ministers. So these ministries need to critically evaluate themselves,” he said. Verité Research had based its survey on 37 new budget proposals—mainly capital, but also some recurrent expenditure—each of which exceeded an allocation of Rs. 1 billion, and these 37 proposals amounted to Rs. 116.91 billion or 83 percent of the allocation on new budgetary promises.

According to Fernando, just 3 percent of the budget promises were on track or ahead of schedule, and all of that were road development projects, while 32 percent of the proposals were lagging behind.

She added that 14 percent of the promises have been broken, with the funds allocated being either taken away from the project, brought forward to the next year or the project being struck off from the budget. 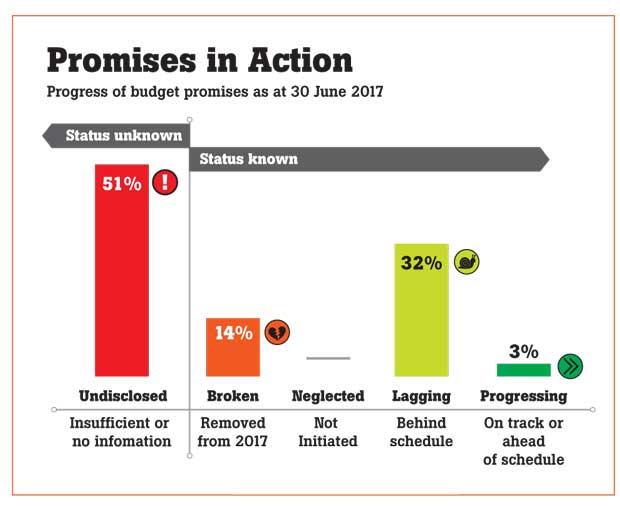 Fernando said that the organizations that chose to divulge information on the progress of the proposals, either through their website, or through Right to Information (RTI) requests, should be commended.

“Even if a promise is broken, or if it’s neglected or even if it’s not on schedule, the fact that they shared the information should be commended,” she said.

The survey, done over a period of four to five months, fired off 54 RTI requests, of which only 15 got replies within the lawfully stipulated time period, while a further 16 more received reply following appeals.

According to Verité Research, some of the most open government institutes, which proactively provided information, and promptly replied to RTI requests were the ICT Agency and the ministries of Fisheries and Aquatic Resources Development, Housing and Construction, Industry and Commerce, Power and Renewable Energy and Irrigation & Water Resource Management.

The ministries of Agriculture, City Planning and Water Supply and Defence were found to be the most closed ministries, with the Defence Ministry refusing to disclose information not related to national security, such as pension payments for soldiers.

Verité Research Director (Reseach) SubhashiniAbeysinghe noted that the government, in recent years, had continuously cut back on expenditure promises.

“There has been a large discrepancy between the funds allocated and funds spent by not just this government but governments over the past 6 years,” she said. According to Verité, budget promises tend to be unrealistic, and are better fulfilled during election years.