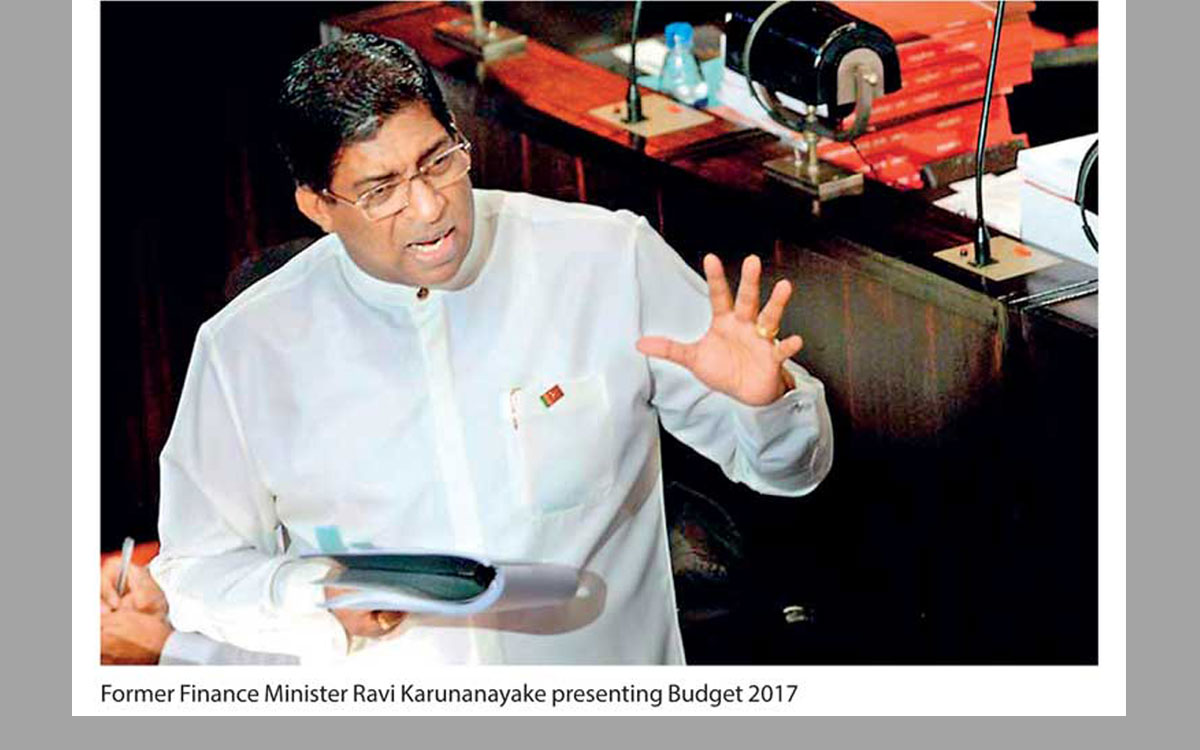 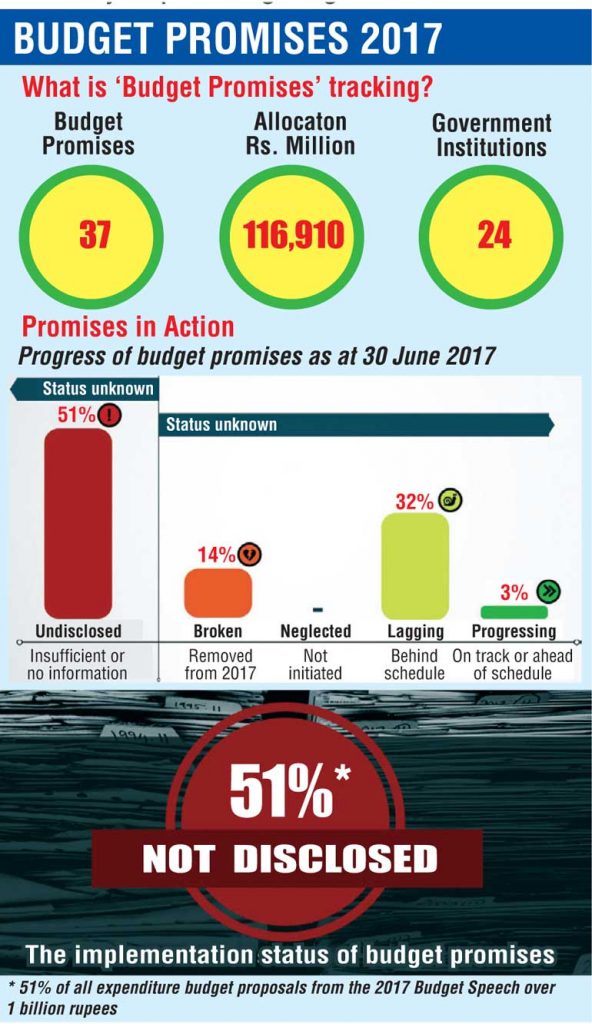 As the country prepares for the unveiling of Budget 2018, the transparency and status of proposals under the previous edition is under review with an analysis of 2017 Budget proposals by Verite Research showing that less than half of 37 major proposals amounting to Rs. 116,910 million in public funds covering 24 Government institutions could be tracked by the public.

The research, which covered policy implementation over the first six months of 2017, ran into repeated roadblocks as authorities refused to share information even after multiple Right to Information (RTI) applications had been filed.

The full details of the findings can be accessed at www.budgetpromises.org, which is the latest online platform launched by Verite Research. Even though the Government had earlier called on all ministries to publish updates of their tasks on respective websites for transparency, few have done so with key details of some of the most important proposals not before the public, researchers found.

“The budget that is presented in Parliament is somewhat different from what is implemented over the next year. There is a real problem because analysis, perspectives and policies get shaped around these but actually do not happen, that means the country may be having wrong expectations and having the wrong kind of analysis in terms of understanding government action,” said Verite Research Executive Director Dr. Nishan de Mel.

“So this platform is something that attempts to help everyone to understand how the Government has moved forward on promises it has made in the Budget.”

Budget proposals for one year are also implemented over several years and transparency is crucial to their consistency and effectiveness, he added.

Verite Research Assistant Analyst Nilangika Fernando noted that of the proposals, 14% were removed and 32% were lagging behind schedule and only 3% or one proposal was on track and ahead of schedule. The 51% of proposals where no information could be obtained was worth Rs. 67 billion, she added.

The one proposal ahead of schedule was, according to Verité, the road improvement in rural areas carried out by the Local Government and Provincial Councils Ministry, which was allocated Rs. 4,500 million by the Budget.

“Attention is usually focused only on the budget speech but there is a need to understand how much is implemented. Even though under the last Budget there was a proposal for ministry websites to voluntarily share information on capital projects, very few complied,” she said.

Customarily many conferences and discussed are focused on the budget speech itself. The Budget for 2017 had 24% of feel good statements, 36% of expenditure proposals, 8% revenue proposals, 30% regulatory changes and 2% of political statements.

Even though ministries are expected to hand over progress reports on their projects to the Finance Ministry, only 14 of the key ministries had done so and even fewer had shared their policy statements, procurement details and other documents online. A few institutions and ministries had cooperated when they were approached by the research team but gathering information had still been a challenge, Fernando emphasised.

Interestingly, the Information Communication Technology Agency (ICTA) under the Ministry of Telecommunication and Digital Infrastructure was among the most responsive and had a large number of major proposals accounting for about Rs. 75 billion.

The Housing and Construction, Power and Energy, Industry and Commerce, Fisheries and Irrigation and Water Management Ministries were the most transparent, according to the study. The Fisheries Ministry in particular was praised for voluntarily sharing progress reports and other documents online.

Many other top ministries, however, fared badly. These included the Education, Law and Order and Defence Ministries, even though the request for information from the latter had nothing to do with national security and focused only on the pensions of disabled war veterans.

One proposal to build a Rs. 1 billion convention centre to boost MICE tourism was abandoned by the Government, resulting in it being marked as “broken”. The change in decision was communicated by the Minister earlier this year after the proposal was revoked by the Government. Plans to expand the Lak Sathosa network had also been shelved.

Many key proposals such as the contributory pension fund, interest subsidy for housing, double tracking of railway lines, private free trade zones along expressway corridors, global marketing campaign to boost FDI, credit scheme to encourage domestic solar power generation, ensuring basic facilities of water, power and sanitation for all schools were among proposals that were either lagging or undisclosed.