Expert calls for access to data on implications of Budget proposals 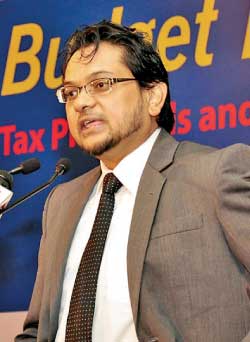 A top economist yesterday called for free access to accurate data to properly asses the implications of 2018 Budget proposals.

Verite Research CEO Dr. Nishan De Mel pointed out that Budget projections were often designed to mislead and show a favourable position that did not exist and the simple fact that money had been allocated did not guarantee a positive economic outcome unless information was available to the people  for them to decide on the Budget’s implications.

“It is not about the conversation and the forecast we have on the Budget, but it is about the accountability that you generate by asking better questions from the Government and holding that information publicly which is going to help in deciding the implications of the Budget for the future,” Dr. De Mel told the CMA 2018 Budget Highlights Forum in Colombo yesterday.

He stressed that even if the Government allocated a large amount of money on education, healthcare and other sectors it was not only the funds allocated for these sectors that were important but the manner in which they were spent.

“It is important to track how that money works to get the outcomes that people need. Budgetary expenditure is not tied to an outcome matrix. If a Budget is to have a real economic implication outcome then we must know what that spending is going to achieve and how many positions we are going to create in terms of skills development,” he added.

Considering that the Budget allocations were made with a reasonable amount of research and analysis, Dr. De Mel suggested that this was the kind of matrix which must be presented with the Budget to understand economic implications.

He also said that as much as there was a media Budget there is also a cowboy Budget where most policies are decided without much research. “A lack of analysis and the ability to have research that is analytically driven means that Government ministers don’t have a choice but to shoot from the hip and give you a cowboy Budget.”

It was pointed out that the budgets have become very interesting and easy to predict as what the Government presented was precisely the opposite of what was going to happen. “It is a good way to read the Budget. You have to understand that in a very systematic manner the information is wrong. So there are informational problems with the Budget.”

As far as revenue targets are concerned, he stated that it was pretty much the same, although the Government has projected high revenue targets, by the end of the year it will end with revenue below the target.

“As a society and business community if we continue to ask the Government questions on the Budget and its matrix there is a much higher probability of getting the outcomes of a Budget,” he added.