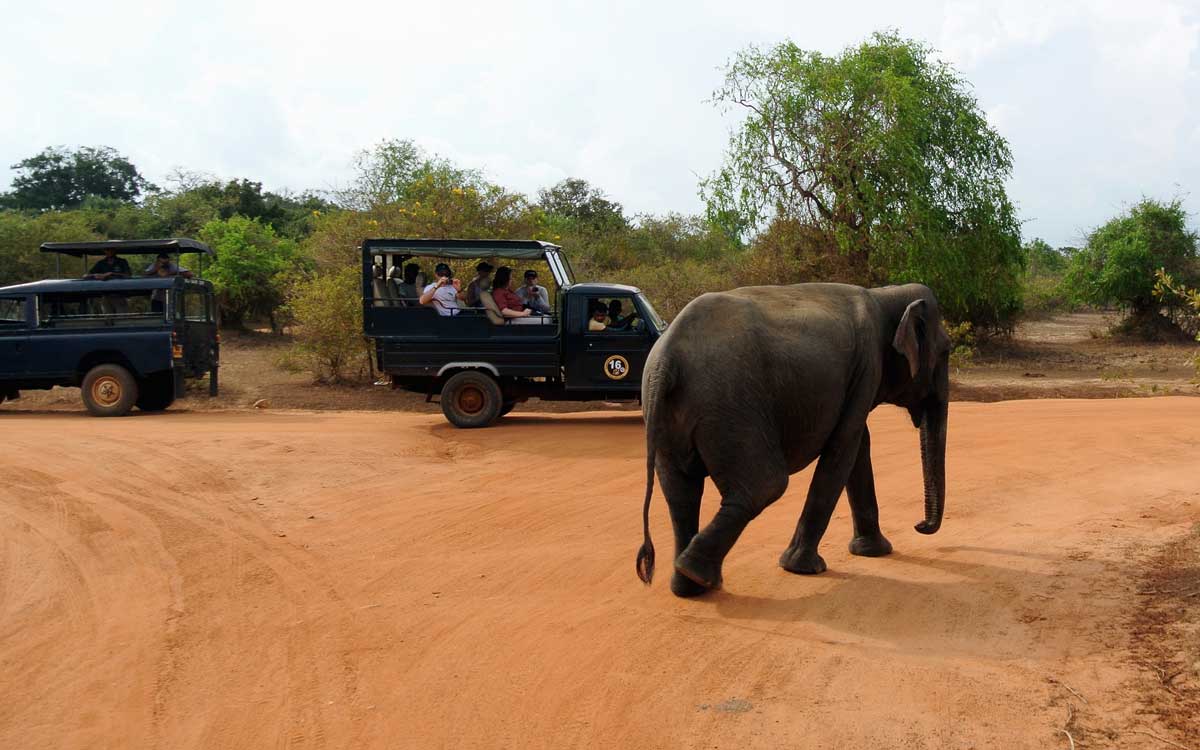 Although the Government claims to be pursuing a sustainable development agenda, this latest policy fiasco, driven by political interests as opposed to data, betrays a lack of sincerity and commitment to conservation. Yala is a national treasure that should be preserved for future generations; favouring a few will reduce it to an arid memory of the past

The environmental costs of over-crowding of Block 1 of the Yala National Park are numerous, and often irreversible.

First, poor driver behaviour has resulted in animals being run over. In 2011, a leopard was found dead, having been hit by a fast-moving vehicle. Although hit-and-run incidents of big game such as leopards receive press coverage, smaller animals that are also victim to reckless driving go unreported.

Second, there is no respite for the animals in Block 1. As most of these animals are territorial (i.e. have home ranges), those inhabiting Block 1 face constant human disruptions. Moreover, despite the high number of jeeps allowed in the Park throughout the year, pressure is still placed on the Department of Wildlife and Conservation (DWC) to keep gates open over the relatively short, annual six-week park closure between September and mid-October.

Third, pollution from exhaust fumes and raised dust from moving vehicles has affected the quality of air for animals and humans. This includes tourists, who travel in open-top jeeps. Last, irresponsible jeep drivers and tourists dump waste, which is harmful when consumed by animals.

According to the Sri Lanka Tourism Development Authority statistics visitor numbers to Yala doubled over a short period of four years from 339,633 in 2012 to 658,277 in 2016. Contrasted with 2008 figure of 43,368 visitors, Yala has experienced an unprecedented increase in numbers over the last decade. With rising tourist numbers, together with poor waste management, the level of pollution and stress to fauna has increased significantly.

To mitigate the growing problem of over-visitation to Yala National Park, a multi-stakeholder committee appointed by the Prime Minister’s Office has developed an Action Plan. The Plan was completed nine months ago and was in implementation until recent events took precedence. The committee was chaired by Dr. Pilapitiya.

The Action Plan aims to identify the carrying capacity of the Park, to introduce a sustainable limit on the number of jeeps that can enter the Park on a given day. Consultations with jeep drivers were undertaken by the DWC on behalf of the committee, to inform the Action Plan. Based on the consultation findings, the Plan accommodated for the fact that a sudden reduction in the limit of jeeps is neither socially nor politically feasible. As such, it introduced a staged-approach to implementation.

Despite the Action Plan being in place at the request of the Prime Minister’s Office, and the Minister of Wildlife, Gamini Jayawickrama Perera proposed a reduction in the limit of jeeps to 150 jeeps on 18 October 2017. This resulted in a backlash from jeep drivers. Lobbying by jeep drivers then led to a steady increase in the limit to 300 a day (150 jeeps over two sessions). One week later, this number was increased to 400 jeeps a day and on 8 November 2017, to 500 jeeps a day. Over the course of 21 days, the Minister gave into jeep drivers.

According to a recent news report, the highest recorded number of jeeps on a given day in Block 1 is 4251 with numbers peaking at around 600 over the Christmas period. Most argued a limit of 500 was tantamount to no limit at all based on current visitation numbers.

Countering this argument was acknowledgement that at the very least, a limit was introduced by the Minister ahead of the 2020 timeframe, thus preventing the situation from getting worse until carrying capacity studies are completed. There are around presently 700 commercial safari jeeps in the Tissamaharama, Kataragama and Kirinda areas with no cap on the issuing of jeep permits.

At the end of November, in a dramatic and hopeful turn of events, in a show of leadership by the Prime Minister, the limit was reduced to 300 jeeps per day. The limit was brought while the Prime Minister appeared critical of the Minister of Sustainable Development and Wildlife and Hambantota representative, Minister of Housing and Reconstruction Sajith Premadasa for his role to play increasing the limit to 5002.

The limit of 300, with some quarters quoting a figure of 450, remained intact for roughly a month before increasing to a now unverifiable number. A recent newspaper article places the new limit at 600. According to one jeep driver on this latest reported increase: “Dhang chandaya ne, miss. Gaana wadi kerala. Mukuth salasmak na ne hariyata.” [It’s election time, lady. Numbers have increased. Nothing is organised in a proper manner.]

Conservationists are bitterly disappointed. This time, the Minister of Fisheries and Aquatic Resources Development and State Minister of Mahaweli Development Mahinda Amaraweera allegedly took a sudden interest in tourist numbers, and pushed for an increase in jeep numbers to accommodate them.3

The Minister is incidentally a representative of the Hambantota District. With the Local Government elections looming, it is perhaps unsurprising that local politicians are interfering with jeep limits. It appears representatives of the Hambantota district are only interested in preserving their voter base and not our priceless natural heritage.

There are plenty of vested interests to remove jeep limits (including hoteliers) and enough political clout to disregard any limit put in place. According to the Sri Lanka Tourism Board statistics, Yala National Park’s revenue has increased significantly from approximately Rs. 27.7 million in 2008 to Rs. 612.2 million in 2016, drawn mostly from foreign visitor tickets. Total revenue across all National Parks was Rs. 1.9 billion4.

However, despite rising revenues, successive governments have failed to adequately manage our income-generating natural heritage. Perhaps scathing reviews of Yala by tourists may be our only hope for conservation in Sri Lanka.

“Supposed to be a National Park with wild animals roaming freely but the most we saw were noisy jeeps, about 300-400 converging into one location upon the sight of one lone elephant and then fighting among the drivers and the guides to take a vantage position to capture photographs. It’s just crazy… Wonder if there is anyone in charge at Yala!!! They seem all out to charge the fees and that’s about all. An utterly disorganised National Park if it can be called that, with not even the basic facility of a toilet. An utter waste of time and money. Look elsewhere.” Trip Advisor, 6 January (https://www.tripadvisor.com/Attraction_Review-g1102395-d5327472-Reviews-Yala_National_Park-Tissamaharama_Southern_Province.html)

The Sri Lanka Tourism Board’s Strategic Plan 2017 – 2020 acknowledges the problem, “Reviews on Trip Advisor for whale watching and the Yala National Park experience are overwhelmingly negative, despite the fact that these are potential flagship experiences for visitors to Sri Lanka.”

The DWC, under the Ministry of Sustainable Development and Wildlife, is the institution mandated to protect, conserve, and regulate wildlife resources, as per the Fauna and Flora Protection Ordinance, No. 2 of 1937 (as amended). However decisions to continuously change limits contradicts the Action Plan. The Minister’s decision appears to deviate from a legal requirement that a Minister consult with an Advisory Committee, in this instance, on vehicle limits. Furthermore, allegations regarding interference and lobbying on behalf of the Jeep Drivers’ Association by a third party minister5 is an abuse of political power for political gain – at the expense of wildlife and conservation. It is vital that the Minister of Wildlife support the DWC in discharging their conservation mandate while protecting the Department from external political pressure.

This appears to be a rare example of where a sensible Action Plan to deal with a complex issue has already been formulated and agreed upon by relevant stakeholders. However, as often is the case in Sri Lanka, political interference has prevailed over common sense. Although the Government claims to be pursuing a sustainable development agenda, this latest policy fiasco, driven by political interests as opposed to data, betrays a lack of sincerity and commitment to conservation. Yala is a national treasure that should be preserved for future generations. Favouring a few will reduce it to an arid memory of the past.

1 ‘Government to allow safari jeeps to enter Yala per day’ accessible at: http://www.dailymirror.lk/article/Govt-to-allow-safari-jeeps-to-enter-Yala-per-day-140069.html.