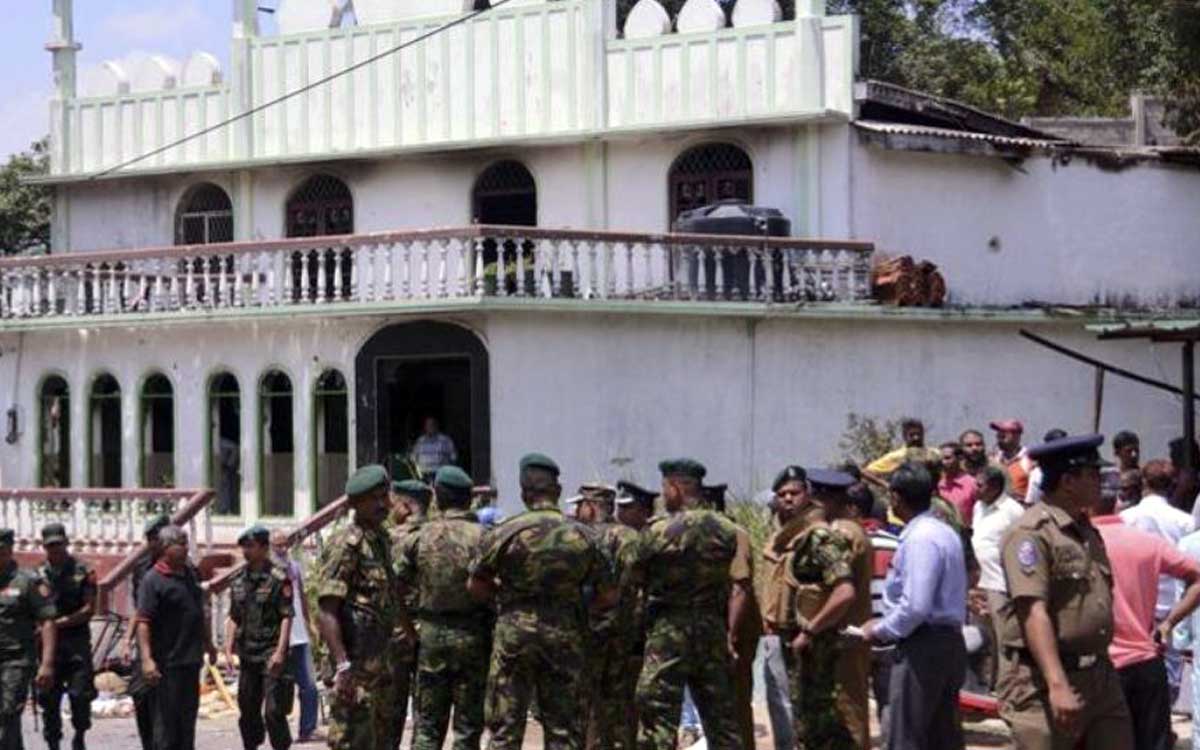 As Sinhalese – Buddhist mobs were escalating violence against Muslims around Digana on March 5, the Hijrapura mosque in Digana had just finished afternoon prayers around 4 pm that day.

As usual, devotees were talking to each other outside the mosque, after the prayers. A few had continued to pray inside the mosque. Suddenly, a jeep full of uniformed, heavily armed men had arrived in a jeep and a couple of motorbikes and surrounded the mosque. Thanks to the camouflage uniform, the devotees had identified them as being from the Special Task Force (STF) of the Police. The STF had brutally beaten up the devotees and chased them as they started to run away. Numerous eyewitnesses and survivors described the brutalities unleashed by the STF in vivid detail.

When I met them on March 9, one man couldn’t walk at all, and several others were limping. At least one was reported to have been in hospital. Many showed me scars and wounds, on their back, arms and legs. Some had been injured through falls, as they were running to escape the assault and were also being chased by STF men.

The devout Muslims were horrified that the STF had rampaged through the mosque with their weapons and boots. “We can’t describe the filthy and abusive language the STF used,” said one eyewitness.

Two Moulavis were beaten up, even as they shouted identifying themselves as Moulavis. They were forced to hold a knife and iron pole (They later said they believed it was to implicate them in false charges). They were beaten when they refused. The Buddhist Monk in the nearby Temple had seen the incident on the roadside and had intervened to save the two Moulavis from the STF’s grip.

In a separate incident around 5pm also on March 5 in nearby Ambagahalanda, A. F. M. Fazil, a member of the Meda Dumbara Pradeshiya Sabawa (Local Council) was at a friend’s house. Suddenly the STF had entered the house and beaten up Fazil and his friend, and also an 18 year old boy who was there. Children, including two who were 2 and 9 years old, had witnessed the assault and had been terrified. Neighbors who had gathered and saw the incident, heard STF men saying “let’s say he tried throw a petrol bomb at us”. The politician’s friend’s hands had been tied behind his back. His feet and that of the 18-year-old boy had been tied together. They were then taken to a Police station, and the 18 year old boy was released, but the politician and his friend were detained overnight. A Deputy Inspector General (DIG) who had been at the Police station had suggested them to be taken to the hospital, but despite  head wounds, the Sinhalese doctor on duty at the Teldeniya hospital that night had refused treatment, saying those who are responsible for killing “our people” should be in prison and not hospital[1]. Both men had been produced before a Magistrate on the morning of March 6 and released on bail. Four days after the assault, on March 9, scars on their body were clearly visible. Fazil’s head was till in bandages as of March 11 and he complained of headaches and body pains. He said he had 5 cuts on his head and had suffered injuries to one leg, an arm and his back.

Since the death of a Sinhalese person on March 3, after being severely beaten by some Muslim men on  February 22, Fazil was part of a team of Muslim leaders who had been discussing with senior police officers and Buddhist monks about ensuring justice for the Sinhalese man and his family, and defusing potential tensions. Government Ministers also had been updated. According to Fazil, such discussions were held from  February 24, long before the death of the Sinhalese man, and had continued until March 3, the day he had died. Discussions had been held in Digana as well as in the deceased man’s village. Fazil suspects STF may have targeted him for his role in trying (and failing) to prevent violence against Muslims by the Sinhalese – Buddhist mobs.

In both incidents, based on actions and words of the STF, the survivors believe the STF was attempting to frame them on false charges about possession of weapons, and by extension, shift the blame towards Muslims for some of the violence that happened around Digana last week. The words of the STF had also indicated a deeply anti-Muslim, racist mindset. The attack on the Moulavis and desecration of the Mosque by entering with boots and weapons, reminded me of attacks on churches, mosques and Buddhist temples during the war by Sri Lankan military and the LTTE.

It was not clear whether the STF personnel allegedly responsible for both incidents were the same. But some of the survivors claimed they were from Kegalle.

Some of the survivors I spoke to were scared to disclose their identities, have their injuries photographed, make a formal complaint or even seek medical treatment at government hospitals, fearing reprisals. However, many were keen to have the truth exposed and justice for perpetrators in order to prevent such incidents in the future. This note is written at their request, with the hope relevant authorities will take speedy action.

Editor’s Note: A report from Verite Research on restriction to religious freedom of Christians found police were often inactive even when physically present in incidents of violence against Christians, from 1994 to 2014. Groundviews repeatedly tried to contact the police spokesman for an official comment on this story, but did not receive a response.

[1] This appears to be implying the injured to be responsible for beating and subsequent death of a Sinhalese man by some other Muslim men, who had already been arrested