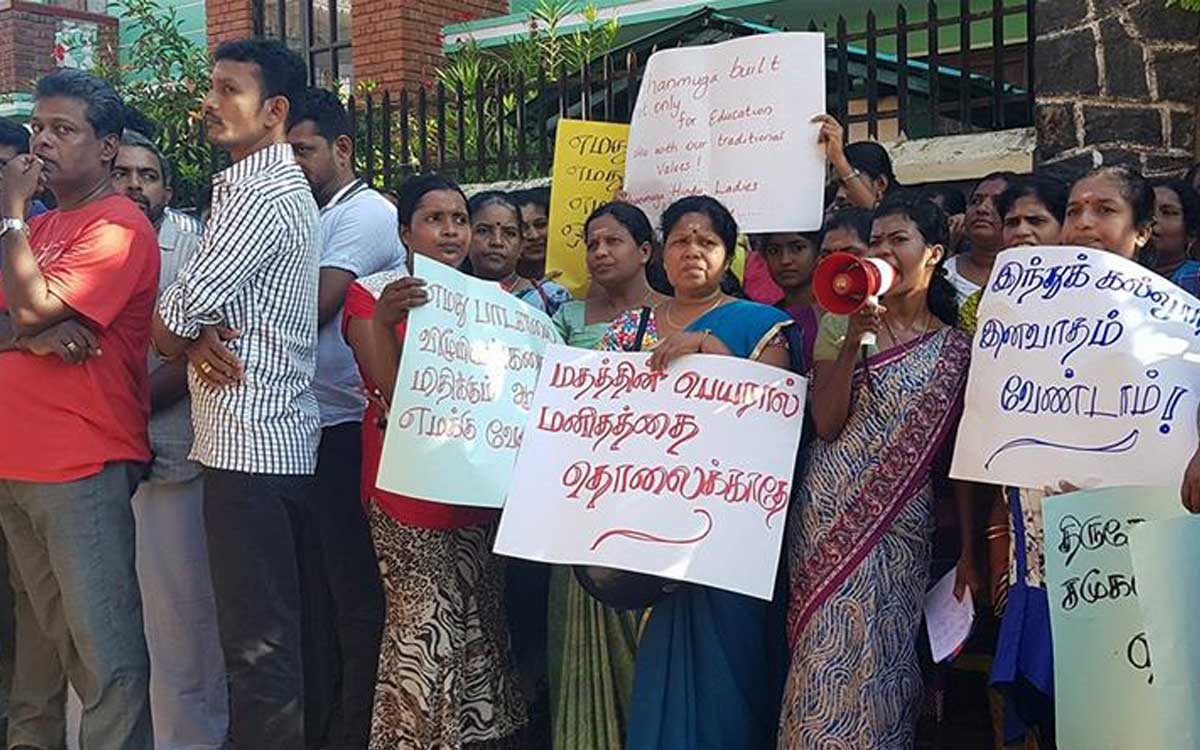 Protesters gathered outside the school to demand Muslim teachers stop wearing the abaya, a cloak worn by some women [Courtesy of M. I. M. Ifas]

When a new staff member wore the robe to a school in Sri Lanka’s northeast, anti-Muslim violence and rallies followed.

Trincomalee, Sri Lanka – Fathima Rameez had been teaching at Shanmuga Hindu Ladies College for five years and never feared for her safety in Trincomalee, a port city on the northeast coast of Sri Lanka.

But that all changed on April 24.

Early that morning, near the school, four men tried to attack another Muslim teacher with sticks.

Some yelled racial epithets at Rameez.

There were also some counterdemonstrations.

More than two months later, the issue has not been resolved.

Anti-Muslim violence has grown in Sri Lanka over the past five years, but the perpetrators have mainly been hardliners from the majority Sinhala Buddhist population.

During Sri Lanka’s civil war, which ended in 2009, communal violence between Muslims, who consider themselves to be a distinct ethnic group in Sri Lanka, and Tamils was common.

While most Tamils are Hindus, a minority are Christian, and Tamil leaders have traditionally reinforced a secular identity to maintain solidarity.

The violence subsided after the war ended, but lingering tensions have helped drive the emergence of a Hindu nationalist movement, to the chagrin of many Tamil political and civil society leaders.

The rise of Hindu nationalists

A Hindu nationalist organisation, Siva Senai, formed in north Sri Lanka in 2016 with the stated purpose of protecting Hindus from “threats” posed by other religions.

It made headlines in May when it organised protests to oppose what it called “the Islamic slaughter of cows”.

In Trincomalee, another pro-Hindu group, Ravana Senai, has been quietly gaining support over the past two years.

We’re fighting for our fundamental rights.

Ravana Senai’s leader K Senthuran says he founded the movement because “Muslims are taking Trincomalee from Hindus little by little.”

As evidence, he claims that Muslims replaced Tamils as the majority population in Trincomalee.

While Tamils outnumbered Muslims in Trincomalee before Sri Lanka’s civil war started in 1983, some of the Tamil population were displaced amid fighting between the Sinhala-dominated government and the Liberation Tigers of Tamil Eelam, a Tamil separatist group.

But Sri Lanka’s most recent censuses show that those demographic trends reversed after the war ended: between 2007 and 2012, the Tamil population regained ground, while the Muslim population has been proportionally decreasing in Trincomalee.

Nevertheless, rumours persist that Muslims are trying to dominate the east by having more children and carrying out conversions.

‘The school was built for Hindus’

“The Muslim teachers started wearing abayas to impose their culture and convert the children to Islam,” he says. “So, we called the alumni and explained why they had to protest. We made banners and signs for them.”

The teachers say they do not want to impose their culture on anyone. They simply want to practise their religion.

According to a complaint filed by the teachers with Sri Lanka’s Human Rights Commission, the dispute started in January when a new Muslim teacher at Shanmuga wanted to continue wearing an abaya.

In response, the school principal prohibited her from teaching and relegated her to the staffroom where she would sit idle every day.

In April, other Muslim teachers at the school decided they would wear abayas in solidarity.

“Because what we wear is an individual choice and right,” said Rameez.

The principal, who requested anonymity, said she banned abayas because “the school was built for Hindus. For 95 years, teachers have worn saris”.

Although Shanmuga was founded as a Hindu school, it was later nationalised.

Word spread on social media that the teachers had begun wearing abayas.

Facebook posts stirred outrage among Hindus by purporting that the teachers’ husbands had threatened the school principal, an allegation she refutes.

“The husbands didn’t intimidate me. They met me and said their wives meant no offence by wearing abayas,” she said.

When the police asked them to disperse, Ravana Senai rallied more to join.

The number of protesters grew to around 400, according to witnesses, making it impossible for the 40 police officers to end the demonstration without risking a riot.

But Rameez credits the police with keeping her and her colleagues safe.

“Police were the main reason that there wasn’t violence”, she says. “They calmed down the protesters.”

In contrast, during the anti-Muslim riots in Kandy in March, police were accused of allowing – and in some cases perpetrating – attacks on Muslims.

‘Fighting for our fundamental rights’

To quell tensions, the Ministry of Education temporarily transferred the teachers to a Muslim school pending a permanent solution.

In June, a ministerial committee recommended that teachers be permitted to wear abayas as long as their faces remain uncovered.

However, the ministry has yet to implement those recommendations and is still deciding how to approach the dispute.

“It’s a sensitive situation that needs to be handled carefully,” said the ministry’s coordinating secretary.

Gehan Gunatilleke, a Sri Lankan human rightslawyer who specialises in ethnoreligious violence said: “This issue is not something the state should legislate at the moment.

“Either way, one of the communities would be aggrieved, and the issue could escalate into communal tensions, and even violence. It is better if the ministry engages both communities, and tries to facilitate a settlement.”

Rameez said that she and her colleagues are determined to stay at Shanmuga, even if it means risking their safety.

“We’re fighting for our fundamental rights,” she said.