‘If changes are made in Committee Stage in Parliament, there will be no room to legally challenge draconian sections of the new legislation’ – says Gehan Gunatilleke

‘If changes are made in Committee Stage in Parliament, there will be no room to legally challenge draconian sections of the new legislation’ – says Gehan Gunatilleke18/09/201817/10/2018 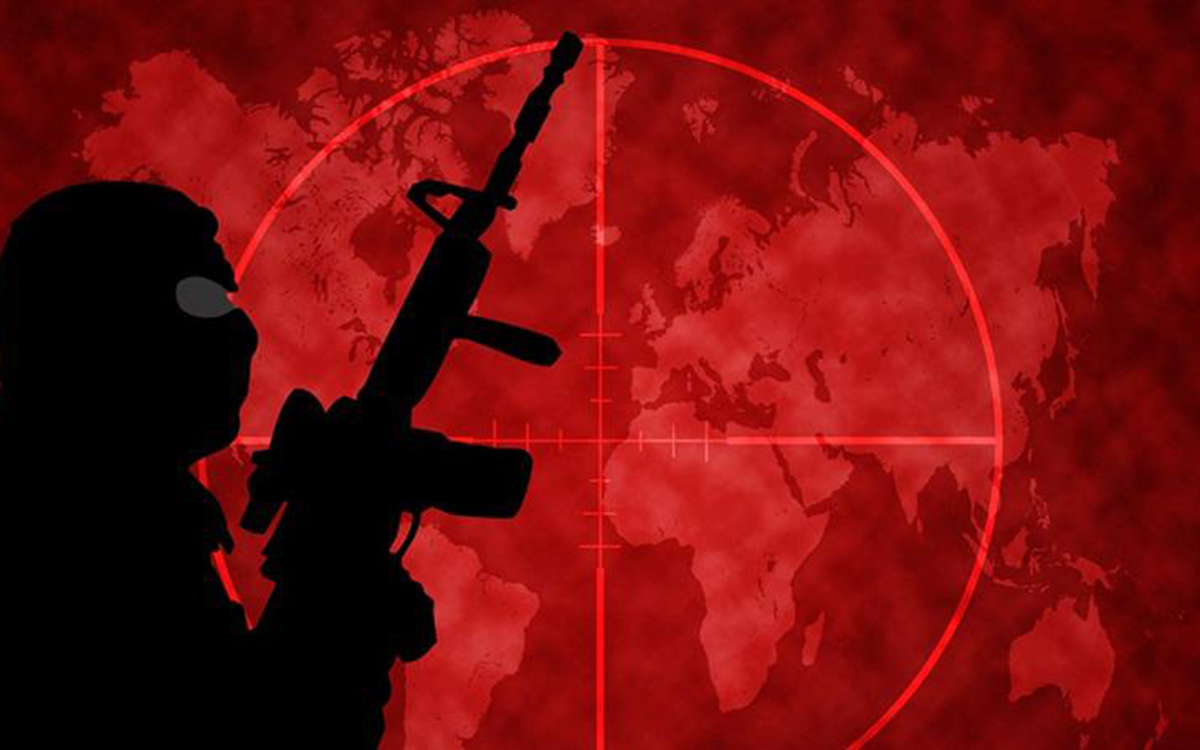 Taken from Sunday Observer
BY A STAFF REPORTER

The Counter Terrorism Bill approved by cabinet last week is a major improvement on the existing Prevention of Terrorism Act, but the bill only has conditional cabinet approval and could be subject to regressive amendments in committee stage in Parliament

The proposed Counter-Terrorism legislation presented to the Cabinet of Ministers last week after several rounds of revisions to the text, is human rights compliant and meets international standards, and Sri Lanka’s obligations under the International Covenant on Civil and Political Rights (ICCPR), legal experts told *Sunday Observer, but rights activists and lawyers are concerned that progressive sections of the bill could be tampered with in committee.

After a drafting and consultation process that lasted over two years, the Government’s proposed counter-terrorism legislation to replace the draconian Prevention of Terrorism Act (PTA) was finally endorsed by the Cabinet of Ministers last Tuesday (11), despite heated exchanges over its provisions. 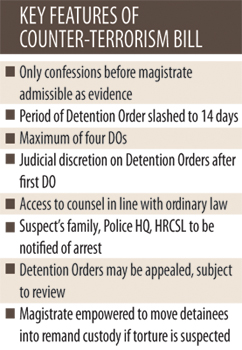 Following a rocky start, the counter terrorism bill in its current form has shed most of its anti-human rights baggage, authoritative sources told *Sunday Observer. When an early draft of the legislative framework for the proposed counter terrorism act first leaked, concerns were particularly rife about a wider list of offences. Under terrorism related offences, the white paper sought to criminalise ‘words either spoken or intended to be read that threaten the unity of Sri Lanka’, that lawyers argued if enacted, could seriously impede free speech in Sri Lanka and restrict the space for resisting impunity and the abuse of power.

The first leaked draft also caused general disquiet because it had retained particularly problematic sections of the PTA, including the admissibility of confessions in custody and failed to resolve the issue of a detainee’s access to a lawyer.

But the draft legislation presented to Cabinet last week had resolved many of those issues, *Sunday Observer learns. The broad offences listed in the leaked legislative framework have been narrowed, and the more dangerous sections in the list – include those that could impact on the freedom of expression – had been removed, to minimise potential for abuse, it is learnt.

In another monumental shift from the PTA, the proposed counter terrorism legislation reduces the period of detention orders from 180 days (six months) to 14 days. The 14-day detention orders can be extended a maximum of four times, meaning that a detainee under the proposed counter terrorism legislation may only be held in detention for a maximum of two months, as opposed to 18 months under the current PTA.

Suspects arrested under the proposed counter terrorism law cannot be held even in remand indefinitely and must be released on bail if no indictments are filed within six months of the arrest. There is an exception to this provision in the counter terrorism bill, in the event that the Attorney General informs High Court that the authorities need more time to conduct investigations. Even in that case, the High Court may extend remand only for a single six months period. Suspects may also be released on bail if their cases are not concluded within a year of indictment, unless the High Court feels the case is being intentionally delayed by the counsel for the defendant.

The proposed counter terrorism law resolves the issue of access to legal counsel and provides for access to lawyers for suspects in keeping with ordinary law.

The new law was not human rights unfriendly, highly placed sources with knowledge about the draft legislation told*Sunday Observer, but it could be construed as ‘clumsy’ because the list of offences may be considered too long. However, the criteria specified would ensure that only genuinely terrorist related acts were investigated and prosecuted under the proposed act, the sources added.

However, the bill only got ‘conditional’ cabinet approval, meaning that changes could be made when the proposed legislation is at committee stage in Parliament.

Hawkish Higher Education and Cultural Affairs Minister Wijedasa Rajapakshe had strongly opposed provisions of the bill that rules out the admissibility of confessions given to police officials, does not include the death penalty for any of the offences and makes the police the implementing authority of proposed act. The cabinet’s conditional approval was granted on the basis that some of the suggested amendments may be moved at committee stage.

Rights activists and lawyers are concerned that while the bill could be challenged within a week of being place on the Parliament Order Paper, if changes are made in Committee Stage in Parliament, there will be no room to legally challenge draconian sections of the new legislation.

“A citizen can challenge the bill that is gazetted, which means he can’t challenge the proposed amendments that will come later. This is hugely problematic because Minister Rajapakshe’s proposals relate to admissibility of confessions, and the bill that can be challenged won’t have those proposals. So the proposals effectively escape judicial scrutiny,” Gunatilleke said, since the Sri Lankan constitution does not permit judicial review of legislation.

Other legal experts voiced similar concerns, saying any concession on the more progressive sections of the proposed counter terrorism law could undermine the improvements it seeks to make on the current PTA.

The Counter Terrorism Bill has been through an exhaustive drafting process, with the legislative framework being revised several times, with the security sector, parliamentary oversight committees and other Government officials and human rights activists and lawyers weighing in on the draft. The CTA drafting committee was set up in April 2016, and included several Ministry secretaries, independent lawyers, military officials and officials from the Attorney General’s Department.

The drafting committee struggled to balance national security concerns and human rights compliance in the new proposed counter-terror law. Since its enactment, the PTA has been strongly criticised for not meeting human rights and international standards.