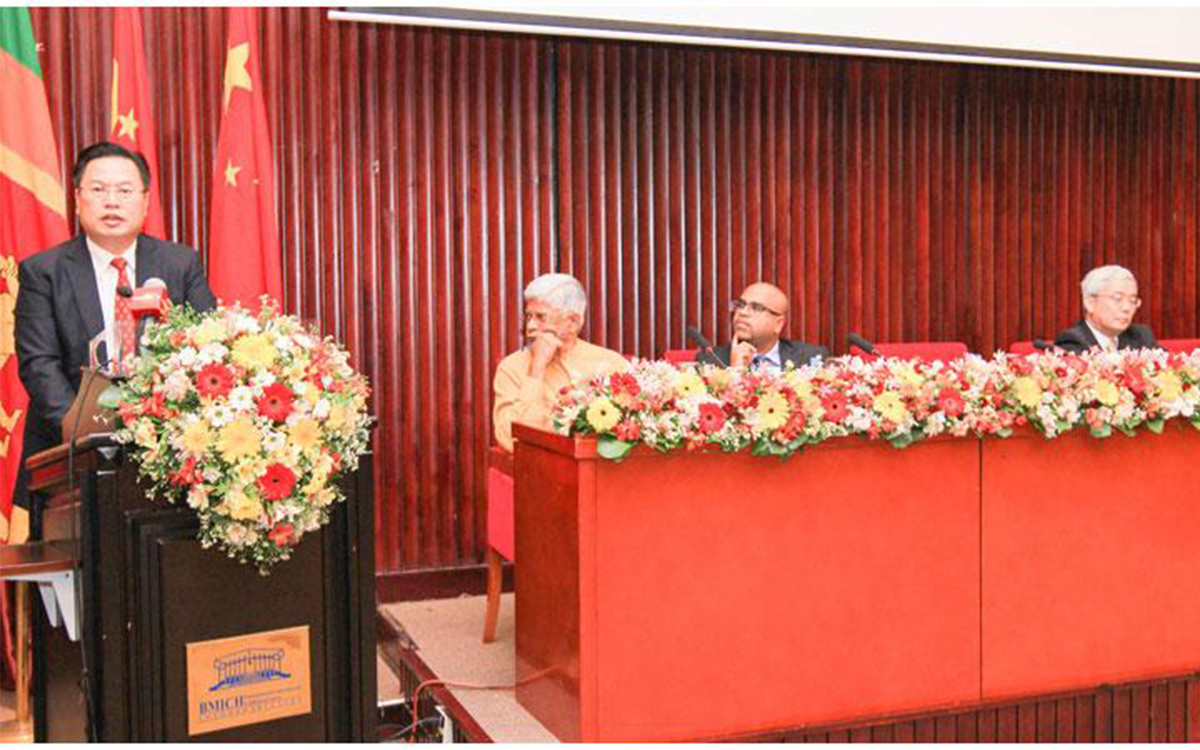 Sri Lanka is one of the first countries to join with the Belt and Road Initiative (BRI) said the Chinese Ambassador in Sri Lanka, Cheng Xueyuan. He reiterated that the economic partnership between the two countries, Sri Lanka and China, has supported Sri Lanka’s development and brought many benefits to both countries. He was addressing an international seminar on the BRI’s progress during the past five years, held recently at the Bandaranaike Memorial International Conference Hall (BMICH), Colombo. 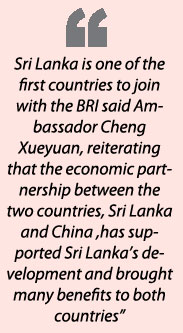 “The Norocholai Power Plant Project carried out under the BRI initiative provides 40 % of the National power supply of Sri Lanka. The Colombo International Container Terminal project under the initiative has become the fastest growing container terminal in Asia while the Moragahakanda project is the biggest water reservoir in Sri Lanka, instrumental in providing many benefits to the agriculture sector and rural communities. The Colombo Port City as well as the Hambanthota Port and Industrial Park are expanding to become the new power centres of Sri Lanka’s economic development,” he said.

During the past five years, the (BRI) has signed over 150 agreements with about 130 countries, worth over 5.5 trillion U.S dollars and leading to 244,000 jobs, said Ambassador Cheng Xueyuan.

The project takes a two-pronged thrust in achieving connectivity with Europe, over land and sea. While the new BRI over land links the economies of the ancient Silk Road and more through South Asia, Central Asia to Europe; the maritime Silk Road connects China through South East Asia, South Asia, North Africa and the Gulf to Europe. According to World Bank reports, the BRI was planned to link China with 65 countries that collectively accounts for more than 30 % of the global GDP, 62 % of the global population and 75 % of known energy reserves.

Though China’s investment initiatives are welcomed by many a developing country partnering in the project such as Sri Lanka, critics point out that the countries cannot absorb the increased debt.

The investment funnelled through large infrastructure companies with little or no transparency, import of labour from China and disregard of the environmental impacts caused by these large infrastructure projects, are other allegations levelled against the BRI by critics and researchers.

Though China is the second largest economy in the world and had lifted nearly 750 million people out of poverty, it is still a developing country, said Subhashini Abeysinghe, Research Director, Verite Research speaking at the event.

China’s economic growth is not equally distributed; it is distributed only among specific provinces. The BRI can be used as the mechanism to provide opportunities to poor communities of China and provide economic growth for economically disadvantaged provinces of China. “Chinese companies have excess capacity. Belt and Road initiative projects allow Chinese companies to export the excess capacity they posses. It would also create a better regional integration around China,” Abeysinghe reasoned.

Asia’s infrastructure lags behind both in quality and quantity and nearly 50 % of the infrastructure needs in the future world are in Asia. “ The biggest economic opportunity available for China in Asia is in the field of infrastructure,” Abeysinghe said.

According to Abeysinghe, Sri Lanka has formed a strong partnership with the Belt and Road Initiative through the implementation of the Hambanthota port, Colombo Port City and Moragahakanda Reservoir Projects.

There have been advantages and disadvantages through the implementation of Chinese backed large scale projects in the country. Since Sri Lanka doesn’t have enough resources, it is welcome for some other country to provide resources and bridge the gap arising from lack of resources.

“In such a circumstance, it is important to select the right projects; decide whether the projects are in line with our development needs; prioritise according to the importance and see whether the costs are reasonable compared to the returns on the investments,” said Abeysinghe.

Addressing debt trap concerns raised about mega Chinese projects carried out in the country, Abeysinghe reasoned that “It is important to identify whether the financial problems that are prevalent in our country is due to the Belt and Road Initiative and China or whether Sri Lanka is facing these problems irrespective of Chinese involvement.” The Belt and Road Initiative can cause problematic situations simply because of the size and scale of the projects under the initiative. It is important to note Sri Lanka’s commercial debt is not mainly driven by China. As a result of Sri Lanka moving out from the position of being eligible for concessional loans, since 2007 Sri Lanka has increased the non concessional and commercial loans.

In such a circumstance, the concessional loan share has come down almost to 50%. The Chinese loan share percentage in Sri Lankan loans which was 2% in 2008 has increased to 9 % in 2018. In the same period, the debt to international financial markets which was 4 %in 2008 has increased to 54 % in 2018 and 33 % of such loans in international sovereign bonds. “Servicing such debt is a tremendous pressure on Sri Lanka,” she said.

Among South Asian countries Pakistan and Bangladesh are two main beneficiaries of the Belt and Road Initiative launched by China. Pakistan is expected to reap large benefits due to China’s $62 billion allocation for the China Pakistan Economic Corridor.

It is focused on multiple infrastructure projects mainly to build energy infrastructure and transportation networks including the Gwadar port. Bangladesh is in line to receive an investment of $38 billion under the Bangladesh-China-India-Myanmar Corridor in order to develop rail, water, land and air connections between the four countries.