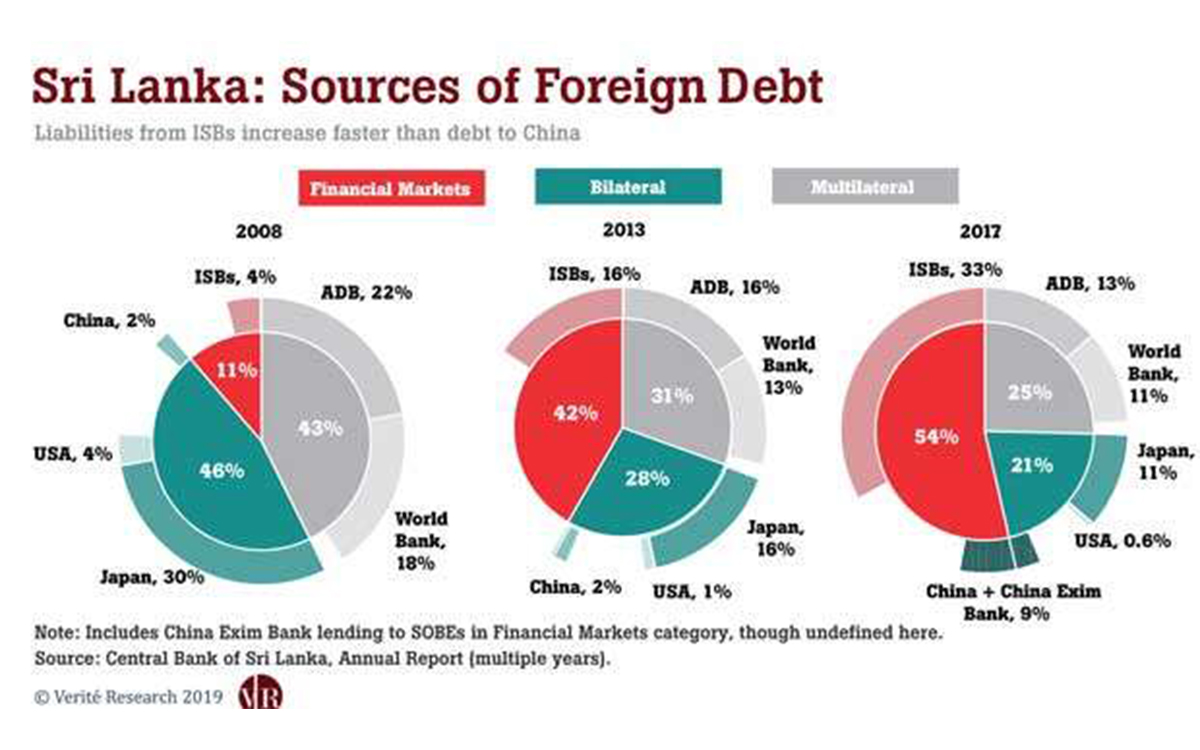 Sri Lanka getting caught in a debt trap and finding itself in a precarious position has less to do with its borrowings from China but more to do with its participation in international bond market activities, according to Colombo-based economic think tank Verité Research.

While Sri Lanka is being made the poster child of falling into the Chinese debt trap, where it is largely perceived that the nation’s sovereignty and geo-political space is compromised, the latest insights by Verité Research narrate a different story.

Of Sri Lanka’s total external debt, Verité Research identifies that less than 15 percent is from China. Although the share of debt to that country cannot be considered low, it is certainly is not the main source of the debt trap, according to Verité Research Executive Director and Head of Research Nishan de Mel.

Acknowledging that Sri Lanka’s debt exposure to China has increased from 2 percent and has grown fast, de Mel pointed out that it is not the monopolizing source of debt.

According to him, the dominating source of the debt trap is the debt to international financial and bond markets, where the rate of borrowing is almost three times higher.

Analysis by Verité Research showed that almost 50 percent of Sri Lanka’s debt liabilities are to international financial and bond markets, which have grown from almost zero percent since 2007—the year the country started issuing international sovereign bonds (ISBs).

This source of debt picked up at a fast pace as Sri Lanka lost access to bilateral concessional debt in 2005 and 2006. De Mel said that the shift from concessional debt to commercial debt is what has essentially forced this growth.

In addition to Sri Lanka borrowing at over 6 percent, the other aspect of ISBs is that it is short term and has to be refinanced every seven years on average.
When compared with the debt from China post-2012, such loans were extended at a concessionary rate of 2 percent and are to be refinanced approximately in 19 years.

“That has a significant implication to Sri Lanka as the cost of the commercial debt is quite high compared to the cost of multilateral and bilateral debt.”

He elaborated that with the ISBs having a weighted average of 6.29 percent, the rate is high and it is getting too expensive to borrow from such sources. Although it’s a decade since the end of the war, Sri Lanka’s risk premium too has not declined as much as it should, de Mel noted.

“Our thought process is that even though people talk about the quantity of debt, it is not necessarily the fundamental problem. It is the price of debt; placing our monetary position at risk is the price we are paying,” he said.