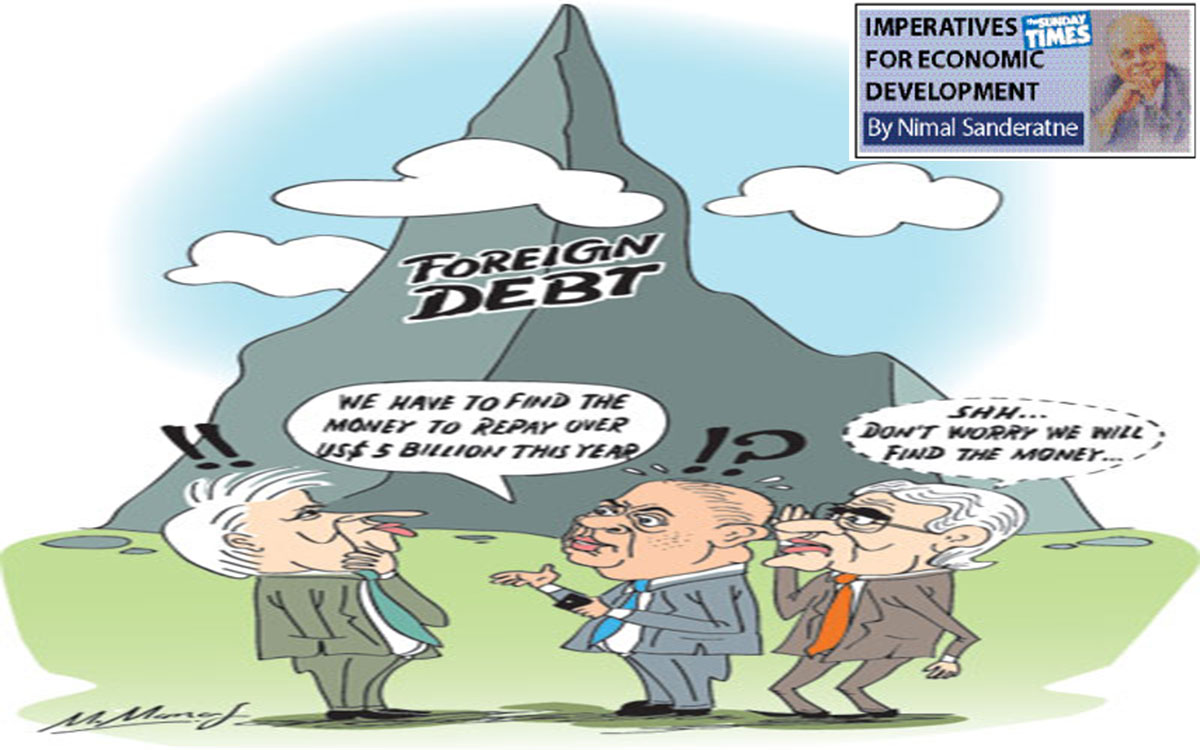 Meeting the debt service obligations of about US$ 5.1 billion this year is a serious strain on the external reserves that was only around US$ 7 billion at the end of last year. To replenish the low reserves, the government has obtained several facilities from friendly countries, notably India and China.

There is no imminent danger of the country defaulting on its repayment obligations, but foreign debt is continuing to grow and increasing the external financial vulnerability of the country.

There has been much international publicity that Sri Lanka is in a debt trap owing to its large debt to China. This is factually incorrect. Sri Lanka’s debt to China is around 10 percent of the total debt and has been obtained on relatively more favourable terms than other commercial borrowing. The Institute of Policy Studies (IPS) and the Verite Research have rebutted this forcefully and factually.

Speaking at the Sri Lanka Economics Association (SLEA) annual sessions on January 19, IPS Executive Director Dr Dushni Weerakoon pointed out that Chinese loans amounted to only about 9 percent of Sri Lanka’s total outstanding debt in 2017, while China’s share as a bilateral lender was about 14 percent, an amount equivalent to India’s share.

Despite this, Dr. Weerakoon said, “Sri Lanka’s engagement with China has become synonymous globally with the Asian giant’s so-called ‘debt diplomacy’ – an euphemism for debt entrapment.”

She said that as Sri Lanka, like many other developing countries, escalates its engagement with China’s ambitious Belt-and-Road Initiative (BRI), the question of debt entrapment requires a more rigorous review.

Dr. Weerakoon pointed out that from a debut US$ 500 million international sovereign bond (ISB) issuer in 2007, Sri Lanka has gone on to amass US$ 15.3 billion during 2007-2018 from subsequent ISB issues and foreign currency term financing facilities (FTFFs). In the same period, Sri Lanka tapped China for a total of US$ 9.2 billion as development loans, and an additional US$ 1 billion as an FTFF in 2018. She remarked, “Not surprisingly, ISBs and FTFFs together account for 33 percent of Sri Lanka’s outstanding foreign debt in 2017, against a 9 percent share held by China.”

Dr. Weerakoon said that criticism of Chinese loan disbursements have focused not only on the volume of funds, but also on the terms. Indeed, Dr. Weerakoon commented that the Hambantota Port saga centres on this theme – funding for phase 1 of the project (US$ 307 million), costing Sri Lanka a fixed rate of 6.3 percent, when globally, rates were declining rapidly following the global financial crisis.

However, She said, when considering the total US$ 9.2 billion Chinese development loans to Sri Lanka, 61 percent has been obtained on concessional terms. Concessional terms on Chinese loans are typically fixed rates at 2%, with other fees of 0.5% and maturity periods of 15-20 years.

Dr. Weerakoon concluded that the terms compare less favourably to Sri Lanka’s other major bilateral donors – India, but most specifically, Japan. However, in comparison to raising ISBs or FTFFs, tapping China can be more price-advantageous, with possibly more flexibility on loan rescheduling, if required.

If only 40 percent of loans from China has been obtained on commercial terms, they account for only 20 percent of the country’s large and rising non-concessional share of foreign debt (at 55 percent of total outstanding debt in 2017). The vast bulk (80 percent) is made up of ISBs, FTFFs, and foreign holdings of Treasury bills and bonds. This shift in composition has been the main driver of Sri Lanka’s rising debt service ratios, where Chinese development loans have played a very secondary role.

Thus, Dr. Weerakoon concluded that Chinese loans are clearly not the primary cause of Sri Lanka’s debt imbroglio but have contributed to, and, possibly, aggravated the problem. Loans from China are attractive to governments for multiple reasons; they are free of conditions and lengthy negotiating processes, and provide access to large volumes more quickly, to be disbursed according to presumed needs. In the event, they also carry heavy risks in the presence of poor analysis of investment projects, incentive problems, and interest group influenced investment choices.

Dr. Weerakoon observed that with much of Chinese development loans plugged into infrastructure projects with relatively low financial returns over the long term, and policy inaction to deal with declining export competitiveness, Sri Lanka turned to ISBs for reserves accumulation – at times spending large chunks defending the currency against all odds – and debt servicing. As a result, the returns on ISB/FTFF are likely to be considerably lower than their borrowing costs.

Dr Weerakoon advised that the more prudent course when simultaneously issuing long term bonds and buying reserves with ISBs, is to accumulate resources to be used in periods of higher borrowing costs. Under the circumstances, net of debt settlements, Sri Lanka’s external debt exposure keeps growing.

Dr. Weerakoon said the risks from the exposure to a large external debt stock are multiplying as the favourable external financial conditions under which Sri Lanka borrowed excessively starts to unwind. To a large extent, these pressures will also dictate future engagements with China. A shift is already taking place, as Sri Lanka increasingly taps China for FTFFs. With narrow financing options for low middle income countries, there is much to be gained from active engagement with the BRI. But, she said, the risks too must be better managed. Safeguards on project appraisal and selection, and strong national debt management practices are essential for countries like Sri Lanka to safely navigate the new financing landscape.

Verite Research Executive Director Dr. Nishan de Mel explained several features of the country’s debt to China. He emphasised that Sri Lanka’s debt problem is not because of Chinese loans that are a small proportion of loans and Chinese loans are a small share of Sri Lanka’s total external debt; that it has been borrowed at lower rates of interest, on average only 2 percent and that they are long term debt that are easier to recycle. Sri Lanka, he points out has a debt problem but it is not due to Chinese debt.

The country’s serious foreign debt problem makes the external financial position very vulnerable. The massive debt repayment obligations of over US$ 5 billion this year by further borrowing increase the debt burden and the external financial vulnerability. The indebtedness to China is a low proportion of foreign debt that has been borrowed at low interest cost and with a long period for repayment.