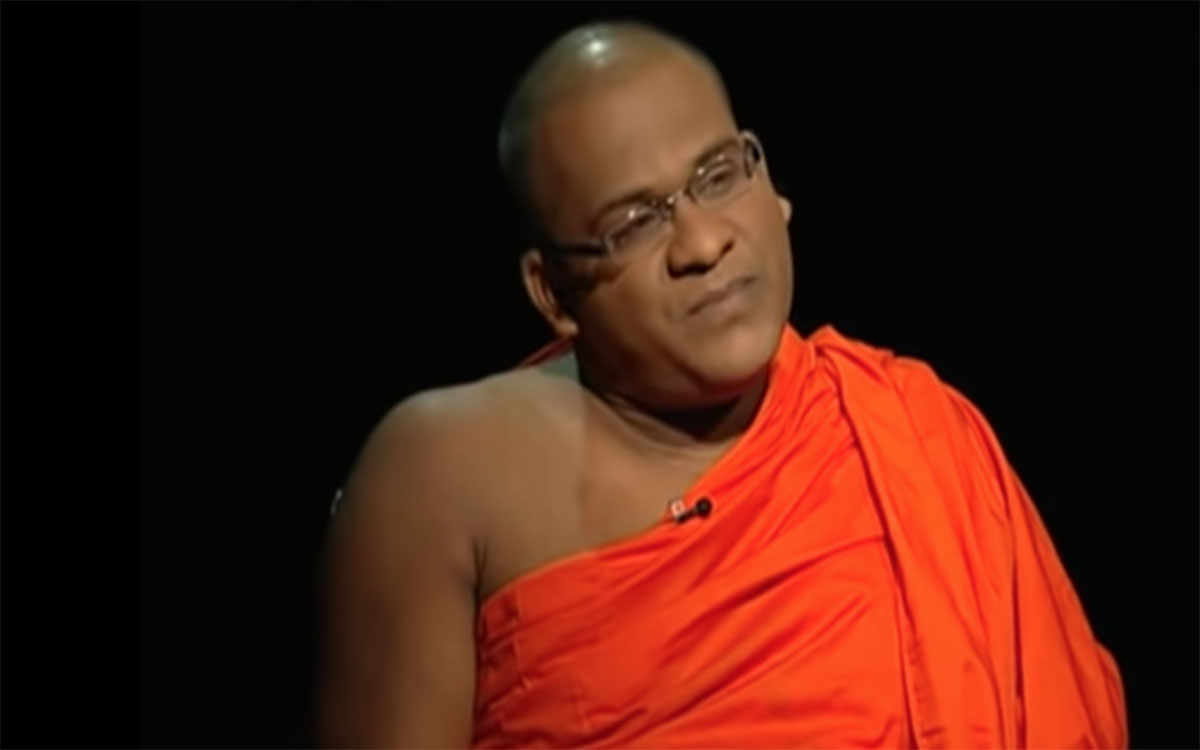 This post originally appeared on Groundviews, an award-winning citizen journalism website in Sri Lanka. An edited version is published below as part of a content sharing agreement with Global Voices.

The photos, depicting a saffron-robed Gnanasara Thero, received thousands of reactions on Facebook. “He has been freed” they read. Others were messages with Buddhist religious greetings like “Budu saranai” (May you be protected by the noble power of Lord Buddha) and “Theruwan saranai” (May you be protected by triple gem)  which were posted on the Facebook Pages of mainstream media outlets like Neth FM and Hiru News.

On May 23, the General Secretary of the right-wing nationalist organisation Bodu Bala Sena Galagod Aththe Gnanasara Thero received a Presidential pardon and was released from Welikada prison after serving 9 months of a 6-year sentence.  In August 2018, the monk was charged with contempt of court for shouting at a judge presiding over the case of missing journalist Prageeth Eknaligoda and then threatening the journalist’s wife.

Gnanasara is well known for his provocative rhetoric which can be seen in a video from a BBS rally in Aluthgama in 2014. Some feel that there are correlations between the speech he gave and the violence that ensued shortly after in which at least four people were killed in riots targeting the Muslim community.

Groundviews spoke to lawyers and members of civil society on the implications of the Presidential pardon. 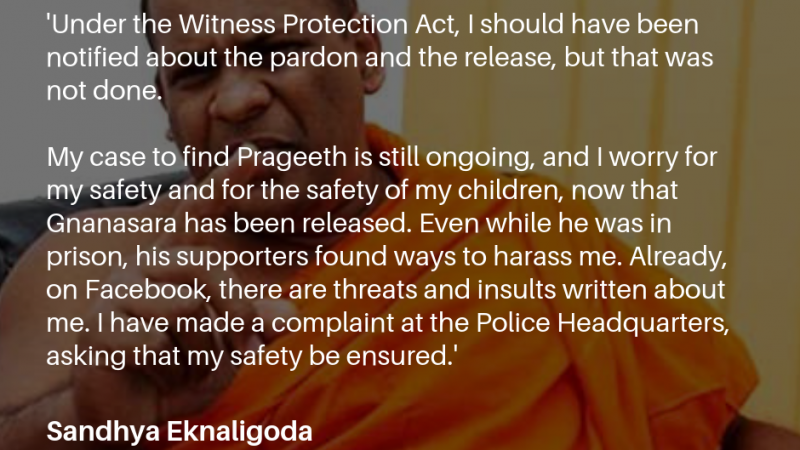 ” Gnanasara was imprisoned for contempt of court, for threatening me at the Homagama town Magistrate. It is the Executive’s responsibility to protect the independence of the judiciary. This is a disrespect to the judiciary and to the rule of law. The President is setting an example that any individual can do anything they want in court, and get away with it through a pardon. This sets a bad example for future cases ”

Speaking on the legal implications of the pardon, lecturer in Public Law at the University of Edinburgh Dr. Asanga Welikala noted that Gnanasara Thero was convicted and given a custodial sentence for contempt of court after displaying behaviour “so egregious within the court premises, and well beyond the respectful behaviour expected of ordinary citizens before the courts, that it would have been a threat to the Rule of Law itself to let him go unpunished.” In this context, he said, the presidential pardon raised a number of very serious questions. 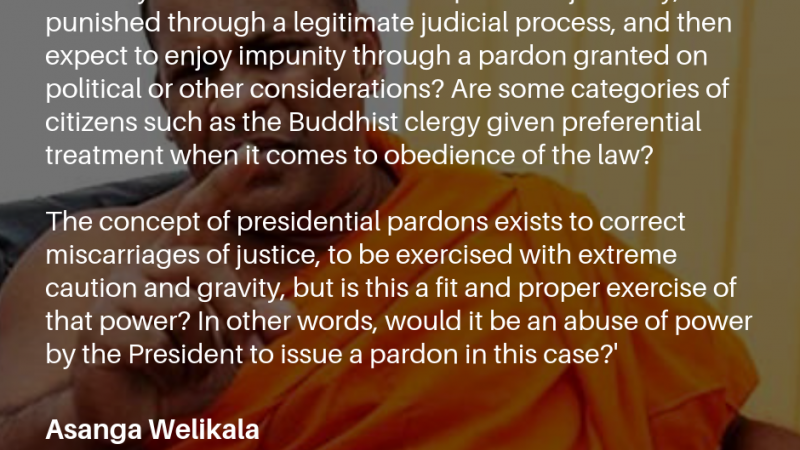 Dr. Welikala also noted that the appeal against the conviction is still in the courts and have yet to be decided on:

” In this context, would a pardon serve to interfere in the due process of law? It is not only the President but also the relevant Minister who has endorsed the requests by third parties to pardon the Thero. The government as a whole, therefore, will need to justify, with stated reasons, why the grant of a pardon, in this case, will not be inconsistent with the Constitution, the Rule of Law, and the administration of justice. Anything less will directly undermine the legitimacy of Sri Lanka’s constitutional democracy.”

Attorney J C Weliamuna added that under the Witness Protection Act, a pardon usually isn’t given without consultation with the witness or affected party. Speaking with Groundviews shortly after the monk’s release, Weliamuna said:

” I am not sure if the Magistrate was given notice. I know Mrs. Eknaligoda has written to the President objecting to Gnanasara’s release 2 months ago. We still don’t know if the views of the Attorney General’s Department, the Ministry of Justice and the judges who convicted him were obtained. Strictly speaking, there is no constitutional requirement to do so, but this is the pardoning of a suspect who has a history of conviction.”

Weliamuna also noted the wider implications of the Presidential pardon, given the Thero’s influential position. 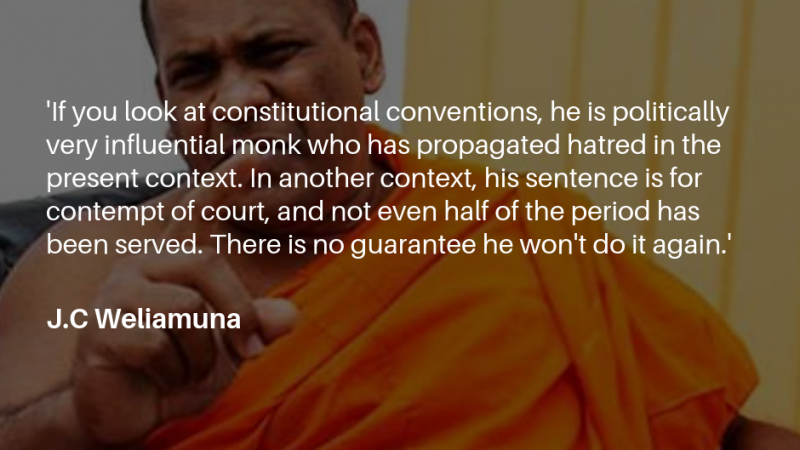 Human rights law researcher at the University of Oxford Gehan Gunatilleke said that the pardon was reflective of a new and disturbing nexus between mainstream politics and “militant nationalism”. 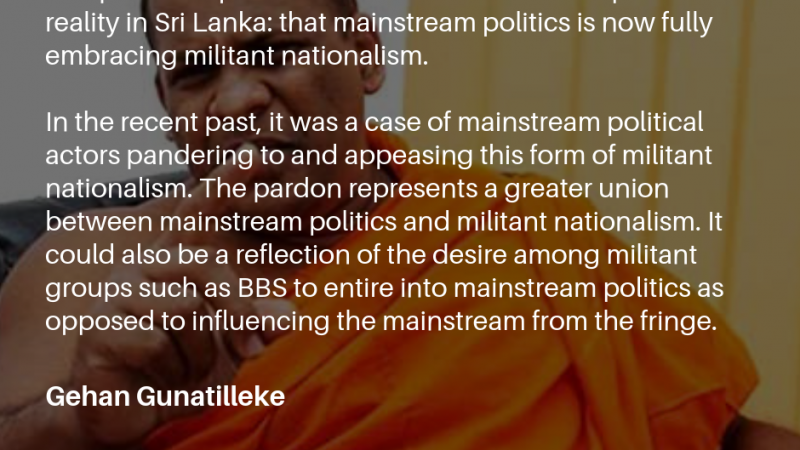 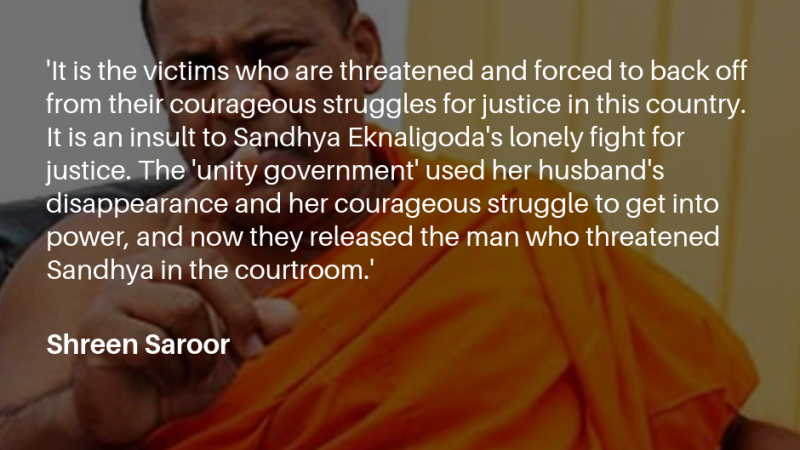 Legal and Advocacy Coordinator of the National Christian Evangelical Alliance of Sri Lanka (NCEASL) Yamini Ravindran added that given Gnanasara’s past record of hateful speech, the Presidential pardon amounted to disrespect to all those who had suffered religious freedom violations in Sri Lanka. 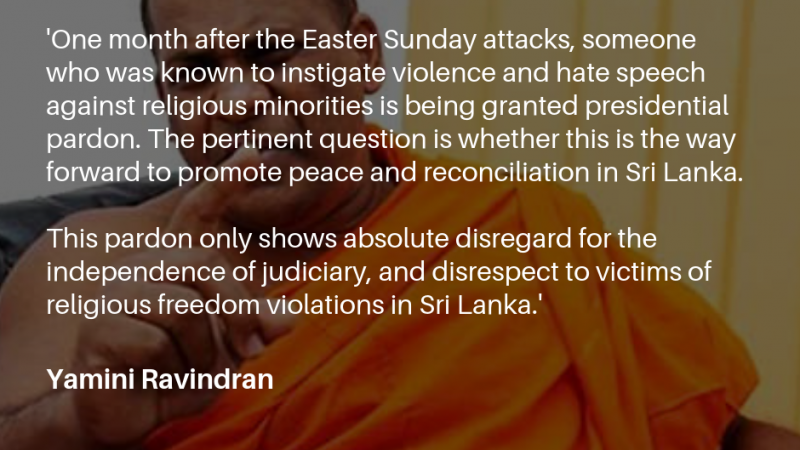 Doctoral student at the University of Oxford Shamara Wettimuny had similar sentiments, noting that it appeared that the Government was not serious about addressing ethnoreligious violence.

Despite criticism from the legal fraternity and civil society, there was undeniable support for Gnanasara Thero’s release, as evidenced by the positive reactions on Facebook. Although the President met with Gnanasara and his mother on the day of his release, the UNP has maintained a stoic silence on the issue, which has been met with criticism from TNA MP M A Sumanthiran. This points to continued fractures within the coalition government – fractures which have had devastating and fatal consequences.

The official Presidential pardon document has not yet been made public.