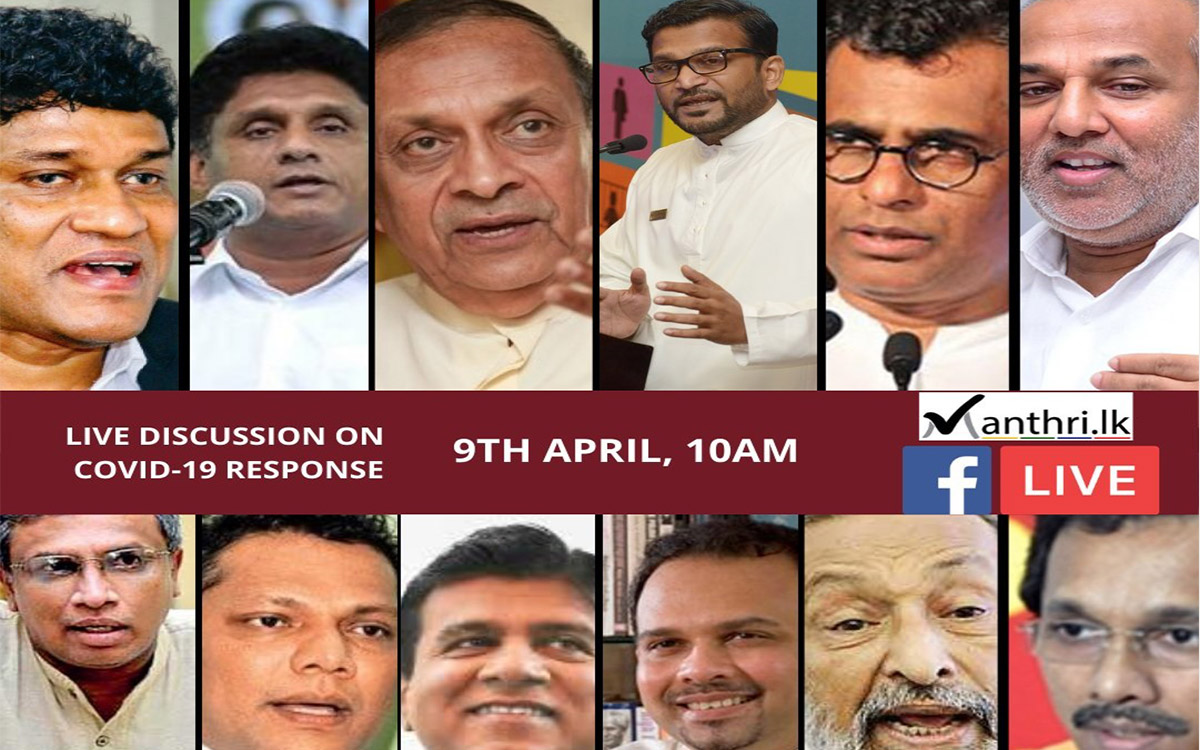 Among the issues discussed were the government’s response to the public health crisis and the calls for as well as opposition to the legislature being reconvened in the absence of a parliamentary election amid a nationwide lockdown.

Organised by Manthri.lk, a web-based parliamentary monitoring initiative by Verité Research, the multi-party discussion was broadcast live on the site’s Facebook page this morning.

What follows are some key highlights.

Former Tamil National Alliance (TNA) parliamentarian M A Sumanthiran speaking at the session called for parliament to be reconvened immediately, echoing a sentiment shared by several of his colleagues in the opposition.

Noting that Sri Lanka’s laws that deal with contagious diseases were drafted in British colonial times, Sumanthiran said that given that the novel coronavirus is a new threat, parliament must be reconvened in order to enact new legislation to contain it. He cited as examples the United Kingdom’s Coronavirus 2020 Act and the extensive amendments made to Singapore’s Infectious Diseases Act in response to the global pandemic.

Sumanthiran, who is a lawyer by profession, said that parliament can be reconvened under Article 70(7) of the constitution. He also argued that, as per article 155 section 4, a dissolved parliament is automatically reconvened within 10 days upon a presidential declaration. (Emergency regulations being made under the public security ordinance or the law).

Dr Wijeyadasa Rajapakshe who opposes the call for a reconvening of parliament said there was no need to use provisions in the public security ordinance since the COVID-19 outbreak is a public health issue.

He argued that political parties that had opposed a vital vote on account couldn’t be relied upon to support fresh legislation to contain the ongoing crisis.

“We need democracy, we need the constitution, and we need to continue development. But we can’t have any of that as long as this crisis is here,” he said, adding that the government’s priority is to protect the country from the virus.

Sumanthiran, however, responded that all political parties representing the previous parliament, if reconvened, can give a guarantee of cooperation.

“Parliamentary oversight is not to be sneezed at,” he said.

Given that there is no guarantee that general elections can be held before at least June 2, said the former MP, it was imperative that the institution that passes laws and oversees public finance is allowed to continue.

Sumanthiran also suggested that all MPs offer to forego their salaries and also look at alternative ways to convene parliament without inviting all 225 members to gather in a single chamber.

“Democracy is paramount. When COVID-19 is gone, we might see that democracy is also gone with it, the way things are being done at the moment,” he said.

He also called for increased tests for possible infections.

“Microbiologists and epidemiologists are saying there aren’t enough tests being carried out. The GMOA (Government Medical Officers Association) on March 25 that there were 19,000 people who had come into contact with confirmed cases. That figure later rose to some 44,000,” he said.

“We must not be under the delusion that we’re doing better than other countries when we’re doing such few tests, which is why we have such low numbers,” he added.

Premadasa also spoke at length on the hardships faced by the public amid the ongoing curfew regime imposed islandwide, and called for a stimulus package to ensure that there is no shortage of food or medicine.

“The GMOA is doing some good work at the moment. We must listen to the valuable input of such a professional body,” he said.

Sumanthiran too spoke of shortages, particularly in the north and east of the country, where he said more than 85% of the population are self-employed. Expressing similar sentiments, Ranawaka said about 58% of the country’s eight-million-strong workforce are daily wage earners who he said are severely affected by the curfew and other restrictions.

Speaking on behalf of the government, former MP Vasudewa Nanayakkar said though a green light of some sort is expected at the end of this month, in the event of unforeseen circumstances, people who are unable to find employment or go to work must be looked after.

Nanayakkara also stressed on the importance of not taking focus out of other, noncomunable diseases in Sri Lanka while fighting the COVID-19 pandemic.

Former Janatha Vimukthi Peramuna (JVP) MP Sunil Handunnetti, who was among those who called for parliament to be reconvened, said the process of relief distribution must be depoliticised at the local level. He also highlighted problematic media coverage of the pandemic along racist lines.

Former MP Rauf Hakeem, meanwhile, said the government can use the Disaster Management Act to contain the current situation in place of its current conduct. He, too, called for a reconvening of parliament.

Former Speaker Karu Jayasuriya, who also took part in the discussion, commented on the importance of convening parliament.

“Some MPs said there was no need for a parliament in the current context. This is a very dangerous sentiment. Every democracy has a parliament. Without a legislature, there is no democracy. We must be careful when making such statements,” said Jayasuriya.

“Both the president and the prime minister are politicians. Both of them were democratically elected by the people. I know they would never condone such a position,” he added.