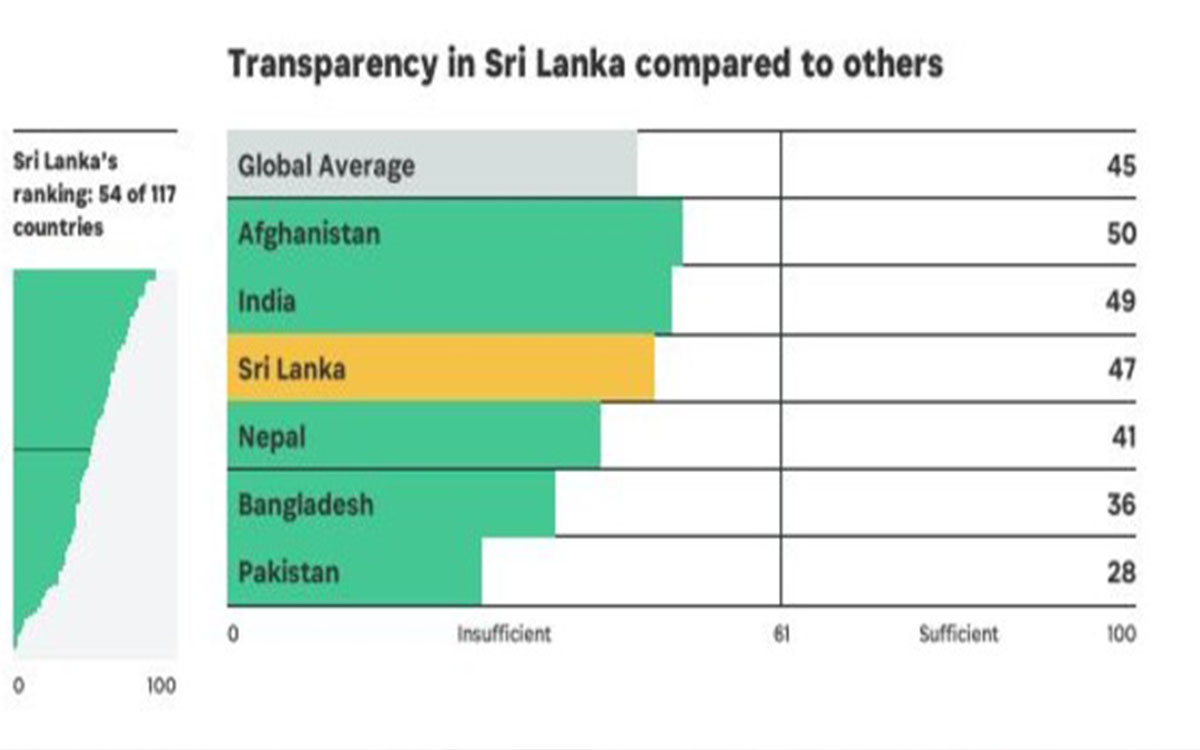 Sri Lanka has been placed at 54th position among 117 nations in terms of budget transparency and accountability, according to the Open Budget Survey (OBS) 2019, which was released recently.

The OBS, conducted by International Budget Partnership (IBP) is the world’s only independent, comparative, and fact-based research instrument that uses internationally accepted criteria to assess public access to central government budget information, formal opportunities for the public to participate in the national budget process, and the role of budget oversight institutions such as the legislature and auditor in the budget process.

The survey helps local civil society assess and confer with their government on the reporting and use of public funds. This 7th edition of the OBS covers 117 countries.

The survey is conducted every two years and the 2019 cycle of the OBS has placed Sri Lanka 54th out of 117 countries, with a budget transparency score of 47/100.

Sri Lanka has been gradually improving its budget transparency, increasing its scores from 39 and 44 in the 2015 and 2017 cycles of the OBS.

However, Despite the improvements, Sri Lanka’s score still falls below the minimum benchmark score of 61 needed to be classified as having a ‘sufficient’ level of budget disclosure under international standards.

In South Asia, Sri Lanka is ranked behind Afghanistan (50) and India (49).

According to Verité Research Assistant Analyst Lahiri Jayasinghe, the primary aspect the OBS covers is a country’s budget transparency, in terms of the disclosure in budget documents, which is measured by the Open Budget Index. She stated that secondly, the survey covers two smaller elements which are budget oversight by legislature and audit institutions and the public participation mechanisms that are there for the budget process.

As the primary researcher who worked on the survey, Jayasinghe presented their findings on 4 May, via a virtual press conference.

Three out of the six budget documents published in Sri Lanka scored in the lowest category for comprehensiveness: (1) the citizens’ budget, (2) the in-year reports and (3) the audit report. The Mid-Year Fiscal Position Report of the Ministry of Finance did not even qualify for the survey as it did not include the details required to meet international standards. The mid-year review and in-year reports are critical in monitoring the progress of budget implementation. Hence, it is important that the government make these reports more comprehensive and make them available in more consistent formats.

Sri Lanka’s National Audit Office provides adequate levels of oversight (78 out of 100). However, Sri Lanka’s parliamentary oversight is weak (36 out of 100). Parliament and its Committees act as an important check on the Ministry of Finance and line ministries by approving the drafted budget and tracking its implementation. The Ministry of Finance can strengthen oversight by consulting Parliament before funds are shifted from its allocation in the enacted budget.

Sri Lanka scored 17 out of 100 in the ‘public participation’ category. Currently, Sri Lankan citizens receive no opportunities for participation during budget implementation. To change this, the Ministry of Finance can pilot mechanisms to (a) include the opportunity for public input during budget implementation and (b) proactively engage the inputs of vulnerable communities.