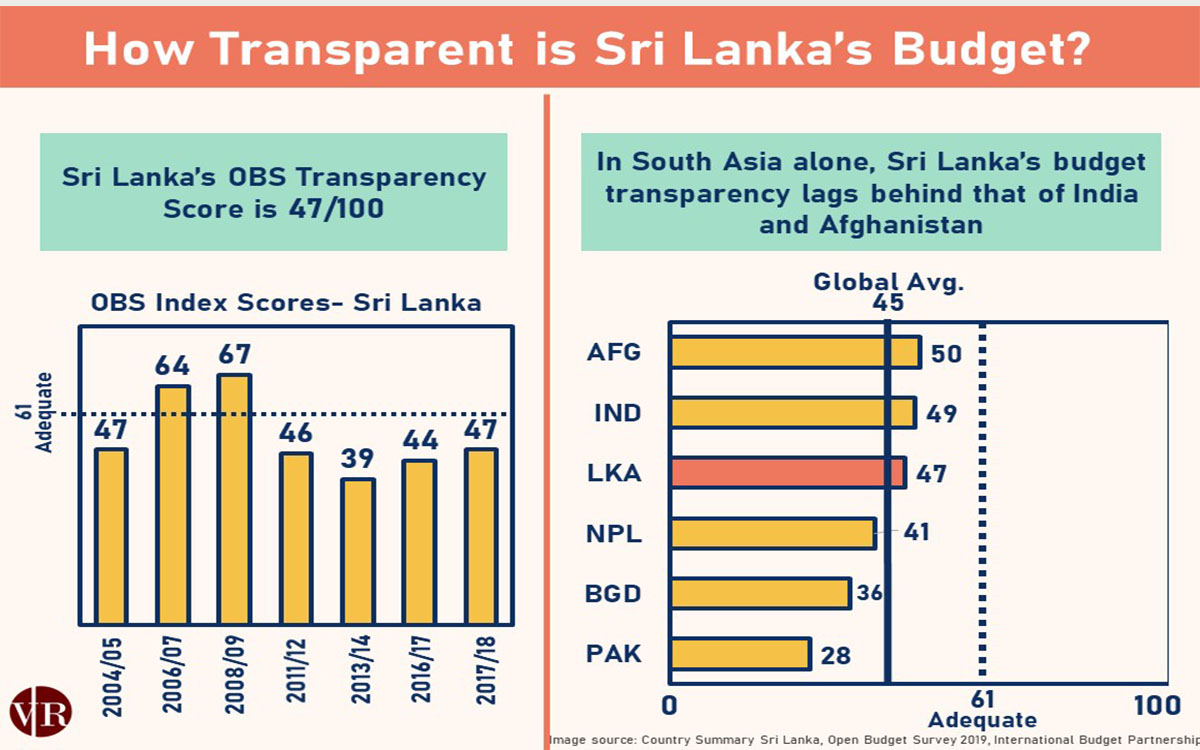 Sri Lanka’s budget transparency is below minimum standard on a international comparison set by a Open Budget Survey, which measures 117 countries, though some improvements had been made over the years, a think tank has said.

Sri Lanka has been placed 54th in the survey with a budget transparency score of 47/100, which was below the minimum required 61.

“Despite the improvements, Sri Lanka’s score still falls below the minimum benchmark score of 61 needed to be classified as having a ‘sufficient’ level of budget disclosure under international standards,” Verité Research, a Colombo-based think tank said.

“Sri Lanka has been gradually improving its budget transparency, increasing its scores from 39 and 44 in the 2015 and 2017 cycles of the OBS.”

Sri Lanka’s finance ministry which had been releasing monthly budget data for several years suddenly stopped releasing them after June 2019, under then Finance Minister Mangala Samaraweera, in a one of the most serious setbacks to analysts who watch the budget to determine its effects on interest rates.

The data has not been updated since, though the central bank has provided some of the data instead, from time to time.

A mid -year fiscal report of the Finance Ministry did not qualify for the survey as it did not include details required to meet international standards.

“The mid-year review and in-year reports are critical in monitoring the progress of budget implementation,” the think tank said.

“Hence, it is important that the government make these reports more comprehensive and make them available in more consistent formats.”

Sri Lanka’s National Audit Office provides adequate levels of oversight scoring 78 out of 100 but parliamentary oversight is weak scoring 36 out of 100, the think tank said.

“Parliament and its Committees act as an important check on the Ministry of Finance and line ministries by approving the drafted budget and tracking its implementation,” Verete Research said.

“The Ministry of Finance can strengthen oversight by consulting Parliament before funds are shifted from its allocation in the enacted budget. ”

Sri Lanka had also scored 17 out of 100 in the ‘public participation’ category.

“To change this, the Ministry of Finance can pilot mechanisms to (a) include the opportunity for public input during budget implementation and (b) proactively engage the inputs of vulnerable communities,” Verete Research said.

Though a large number of proposals are presented in the budget speech, many are not implemented.

Budget proposals should be backed by feasibility studies and sensitivity analysis, and risk mitigation, the think tank said.

Critics have said that in Sri Lanka fiscal and other policy is made without green papers, white papers, public consultation which leads to poor policies that backfire as policy-making deteriorated in the decades after independence