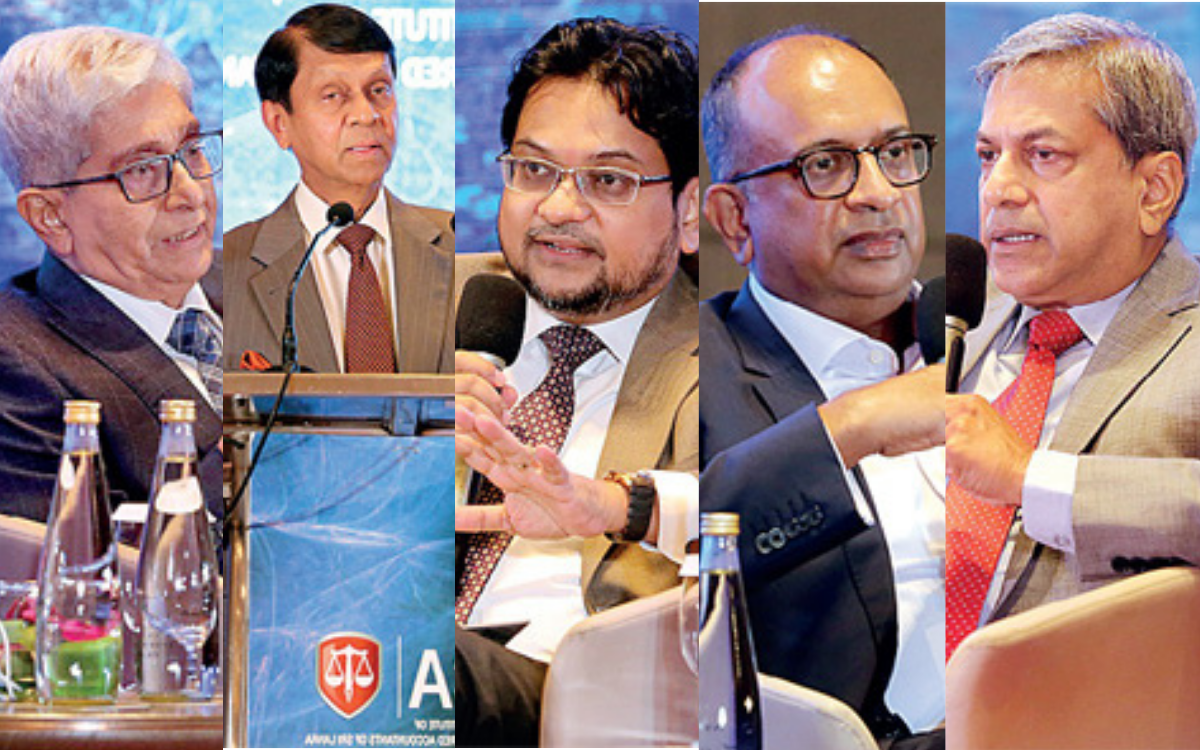 The Institute of Chartered Accountants of Sri Lanka (CA Sri Lanka) recently organised a CEOs Forum to provide clarity on the current debt situation, whilst also helping the dynamic business community gain a better understanding on the Government’s strategy and way forward to navigate the ongoing situation.

Delivering the welcome speech at the forum titled, ‘Debt situation of Sri Lanka: What is ahead of us?’ at Shangri-La Colombo, CA Sri Lanka President Manil Jayesinghe said that the aim of the forum was not to delve on the past, but to focus on where the country is heading in the future. “The debt situation has been a topic which has been on everyone’s mind, and CA Sri Lanka took the lead to organise this forum because the time was apt to clear uncertainty and obtain clarity.”

Jayesinghe said that the end objective of this forum was to provide the necessary support to the business community to take things forward once they had received the required clarity from the Government in terms of policy.

State Minister of Money & Capital Market and State Enterprise Reforms Ajith Nivard Cabraal, who was the guest speaker at the event, said that the business community must help the Government for the Government to help them. “You must help us for us to help you. This a two-way operation,” he said.

He also said that CEOs must develop new ideas and make investments. “We didn’t say there is COVID and wait without passing the law for the Colombo Port City Commission, instead we made it a priority because we wanted investments to come in. Even during the war, we kicked off major projects, and didn’t wait till the war was over to start them.”

He urged the community to look at the long-term instead of focusing only on the short-term. Minister Cabraal said that at some point COVID would be a thing of the past. While conceding that there may be a lull now, he noted that when compared with history, one must remember that one year was a relatively short period of time, although it may be a difficult year.

“But good years will come, so you must hold on. This should be considered as a period to consolidate. We must stay on course and not lose wickets, and then when the time is right, we must hit sixes,” Cabraal said.

The panel session brought together eminent speakers comprising of Governor of the Central Bank of Sri Lanka Professor W. D. Lakshman, Chairman of the Ceylon Chamber of Commerce Vish Govindasamy, Verité Research Ltd. Executive Director Dr. Nishan de Mel, and Fitch Rating Agency Managing Director Maninda Wickramasinghe, while the session was moderated by Jayesinghe. The event attracted some of the top CEOs in the country.

Sharing his views, Prof. Lakshman said that there was a policy plan in place which the Government was pursuing, one that the Central Bank was supporting, and that in the next six months it would show if the plan was working. “In the policy plan, there is a heavy focus placed on exports, domestic production as well as entrepreneurship and SME activities.”

According to Lakshman, these were some of the activities that had been neglected in the past and some past policies had mainly focused on trade which depended on activities, where the country consumed more than it earned. “But we are planning to change this,” he added.

Govindasamy, said that the business community right now needed a serious level of confidence from the Government. “They (the Government) need to tell us that this is the plan, and this is what we are going to do, and you go ahead and do what you can do. This must be strongly communicated.”

He said that the business community was seriously concerned and consumed over how the debt situation. According to Govindasamy, three of Sri Lanka’s major foreign exchange earners – tourism, remittances, and apparels – took a major blow following COVID.

“COVID taught the world it can no longer depend on large supply bases, and lot of countries were hit because they were dependent on either China or India. Therefore, most companies are now looking to diversify, and we must take advantage of this opportunity and attract some of the world’s largest companies to Sri Lanka. But to achieve this, the Government must provide the necessary confidence and ensure policy consistency because only then can we attract such companies to the country,” he said.

However, Dr. de Mel said that the fact that Central Bank had to change foreign exchange related policy 18 times in 2020, whereas it changed it only four times in 2019 and five times in 2018 and already six times in 2021, did not help the confidence building process.

“People begin to wonder whether the plan is not working out, which is why the Government has to continue to change policy on foreign exchange regularly, because if it was working as per the plan then these could have been anticipated and it could have been fixed in advance,” he said

Wickramasinghe underscored the need for the Central Bank to kick start a dialogue with rating agencies as practiced in the past. “In 2008 and 2011, when Sri Lanka recorded rating upgrades, the Central Bank spearheaded a committee which held dialogues with rating agencies. I think it’s time to get this group going because the timing is perfect to have such a dialogue.”