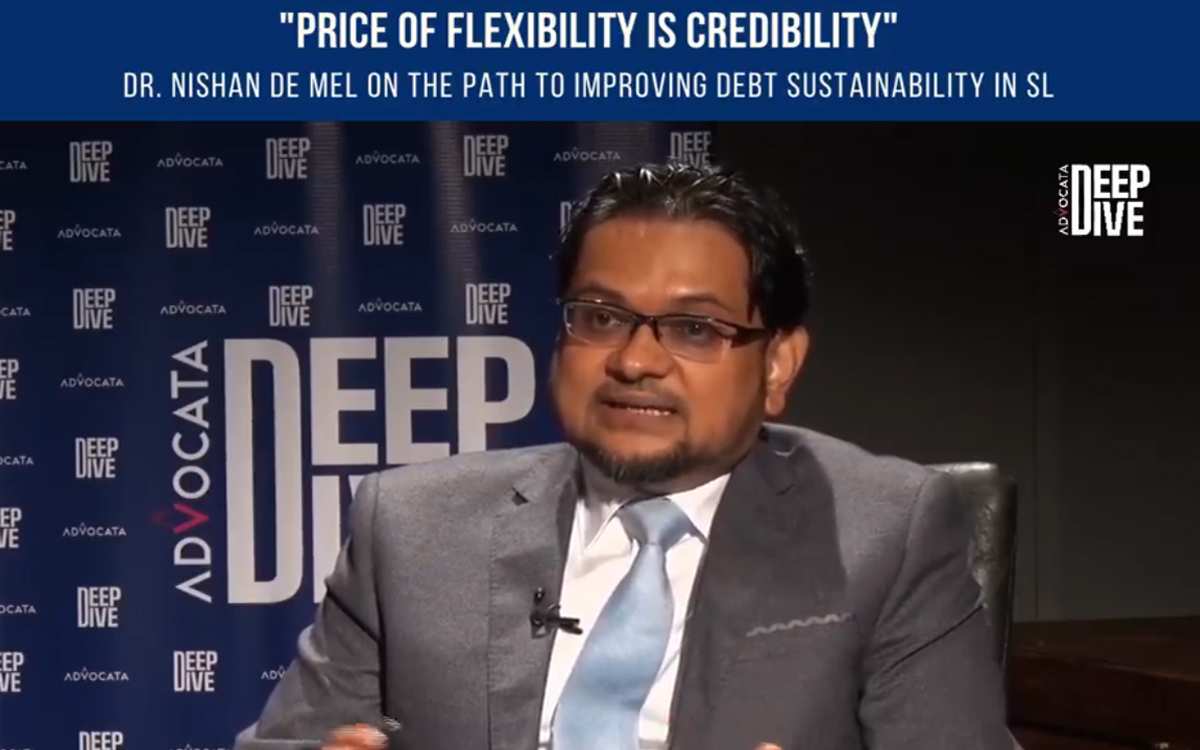 Whatever Sri Lanka decides about dealing with its debt and paying its way through the world, the country needs to formulate a very good economic analysis and a publicly-backed plan that will establishc credibility of the world in its economy going forward, Dr. Nishan De Mel, Executive Director of Verité Research said recently.

He made this remark at a virtual forum conducted by Advocata Institute on ‘How to Resolve Sri Lanka’s Debt Crisis Without Seeking Assistance from the International monetary Fund (IMF)’.

“Such an analysis needs to be thorough and well-structured with the focus on the real economic activity and the financial conditions in the economy. That would be the first step to build credibility of the world about the Sri Lankan economy. It is actually credibility that we lack rather than foreign reserves. If we can build that credibility about us in the countries that we deal with, we may not need assistance from the IMF to resolve our liquidity issue. When such a favourable environment is created and other countries repose their trust in Sri Lanka’s economy, its sovereign credit ratings would see an upgrade and Sri Lanka would be able to raise funds at the international capital market at reasonable interest rates, The skill we need for this is to present an analysis and a plan and then demonstrate our commitment to stick to it. Our concern is whether the government has such a plan and if it does have one, why it is not publicized”.

“I am not recommending that Sri Lanka should or shouldn’t go to IMF. The central question is not that. The central question is whether we can present and adopt an analytical approach to building credibility in the relevant parties about our economy. On the other hand, in the event we decide to go to the IMF at some point, we will still have to have an analysis and a plan.”

Responding to a question on whether Sri Lanka could boost its reserves by building global confidence in that manner, he replied,” When we have a very good policy document, we will need to demonstrate that we are serious about implementing it. Not only IMF, no country would support us without a well-crafted policy document and a frank commitment to actually implement it”

“We started raising funds from the international capital market via international sovereign bonds (ISBs) in 2007-2008. Those loans boosted our reserves. Then we started repayments from 2012. Before that we had not taken that type of loans from the international capital market. As those sovereign bonds increased, our reserves also increased. Before that we had taken concessional loans from foreign countries and lending institutions at low interest rates.”

“Thus we took loans from the international capital market and repaid them maintaining our foreign reserves at stable levels. Such a situation remained in the past 3-5 years. However, that equilibrium unsettled when Sri Lanka substantially reduced its taxes in the fourth quarter of 2019. Due to this substantial change, government taxes fell by about 25%. With Covid the decline was even deeper. Even without Covid, there was the 25% decline in taxes. Our global lenders were stunned by this development as it would further increase the budget deficit making our loan repayments unsustainable. I think that they had some anxiety about it”.

“This tax subsidy was given without an analysis as to whether it would help increase the country’s GDP, government’s income or how it would affect debt dynamics etc. We think that there should have been a rationale for it, but we didn’t see any such thing from the government. At that time, Sri Lanka was on an IMF programme and they probably thought that their facility’s last tranche could not be completed as the economy would not be managed sustainably. Thus the IMF got out of the picture. Then the rating agencies downgraded Sri Lanka according to their analyses. This had an impact on us. In 2019 December, the third downgrade of Sri Lanka took place. Earlier also we had been downgraded in two instances. But the latest rating made it impossible for us to raise funds in the international capital market. This situation complicated the debt- dynamics balance which had been maintained earlier. What has happened now is; we service our loans from the reserves and we can’t refill it like before. This is how this issue actually cropped up in the first place although it is said that it happened due to Covid. Actually Covid exacerbated it as there has been no Tourism receipts. But we have been able to offset that with import restrictions that have been in place. If we didn’t have to service our foreign loans from the reserves, there would not be a crisis at this point. The fact that funds can’t be added to the reserves can be shown as the cause for the current debt crisis.”

“When there is a substantial tax policy change, can we just make an oral statement and justify it? Don’t we need an analysis as to which tax should be reduced and which one shouldn’t, in order to sustainably manage our economy? Here the reality is; when there is no analysis, there is no credibility.”

“The collapse of confidence is the main reason for our economic problem and the decline in reserves. Government says that it won’t borrow from the international capital market and that there is no need to do so. This is heard as a decision made by the government. But it is not a decision. It is a Hobson’s choice. Even if we really want to borrow, we can’t borrow at reasonable interest rates. That’s the issue.”

“Confidence could collapse not only in the absence of an economic analysis. We have gone back on our pledges made to international bodies a number of times. Sad to say that this has become a tradition. So, if we had managed the economy well in the past year, we would have been able to raise loans without help from the IMF. Now we should manage our economy well, before our reserves hit near zero levels or zero.”

“The Central Bank had a medium term debt management strategy for 10 years, and they had published a written document about it three years ago. But now it has been changed and a new strategy is not in place as yet. In the absence of one, you can’t build confidence by making oral statements. People need to have an awareness not only on inflows but also on outflows.”

“Reserves won’t hit zero this year. In 2021, reserves may reach zero sooner or at a later stage. Even if we manage to protract it. it will spill over into the next year and the next year. It will only aggravate. It won’t be resolved. The speed of going towards zero reserves could be faster or slower, but it won’t deviate from where it’s heading. International parties analyse Sri Lanka and they have not changed their analyses. But the government has often changed its policy. For example, the foreign exchange policy was changed many times. This shows that the economy is not moving as the government expects it to. Verité Research has done an economic analysis on Sri Lanka considering its economic activities, GDP, inflows, debt obligations etc. Our predictions have remained valid but the government is not taking them into account. That’s the problem.”

“The government has presented its expectations, not a plan. The difference between a gamble and a plan is analysis. Expectations are not considered as an analysis”.

“If reserves come to zero at one point, we will have to tell our creditors that we will pay only the interest and pay the principal later. We need to sort things out before we face a disorderly default. Such a situation will affect the economy even more. Our banks, our private sector won’t be able to deal with their parties in the international arena. So we need to negotiate well before such an eventuality happens and resolve the crisis in an orderly manner.”

When asked, in such a scenario could Sri Lanka negotiate with the creditors on its own, he said,” We may need help from the IMF to talk to the creditors being these are bond sales involving hundreds of people. The IMF has a service for this sort of structural help – not reserves help – in order to negotiate with creditors and arrive at an agreement. In the event of making an orderly default, help of the IMF would be needed,” Dr. Nishan De Mel said.