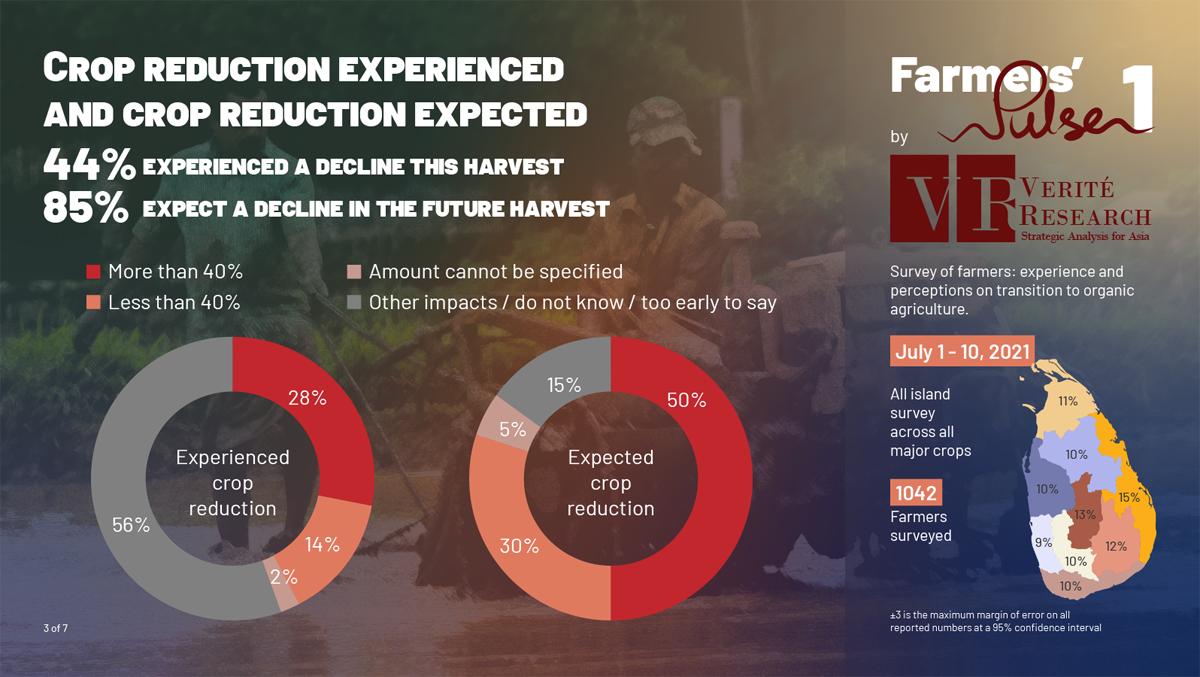 Sri Lanka’s farmers are expecting crop losses after a chemical fertilizer ban and want more time to learn about organic alternatives and their use, but most thought it was a good idea to drop chemicals, a study has found.

Over 90 percent of the farmers surveyed by Verite Research, a Colombo-based think tank said they currently use chemical fertilizer, and about 85 percent expected output falls if they cannot use them.

About 44 percent of the farmers said they had already reduced chemical fertilizer.

About 28 percent of farmers who had reduced fertilizer use this season said the crop had fallen by 40 percent, 14 percent said less than 40 percent, others said the amount could not be specified and there could also be other reasons.

About 50 percent of those surveyed expected a 50 percent fall in output in the next season, while 30 percent expected a fall of less than 40 percent.

Verité Research had conducted the survey via telephone in July 2021 that consisted 1,042 farmers from all nine provinces in the country.

Almost two-thirds of the farmers they surveyed were supportive of the government’s decision but 80 per cent out of the ones who are supportive have said they need more than one year to shift to organic fertilizer as they knew little about it.

“There is a low level of confidence on the knowledge required for the transition,” Verité Research said.

“Only 20 per cent of the farmers said they had adequate knowledge on suitable organic fertilizers and the proper application of it to their crops.”

The farmers have also requested government advise and instructions on organic fertilizer (2) more time, so that it can be a gradual transition and (3) standardized supply of organic alternatives.

Verité said 94 per cent of paddy farmers and 89 per cent of tea and rubber cultivators depended on chemical fertilizers.

The lowest usage is in minor export crops which is 48 percent.

All the other crops used above 60 per cent chemical fertilizer.