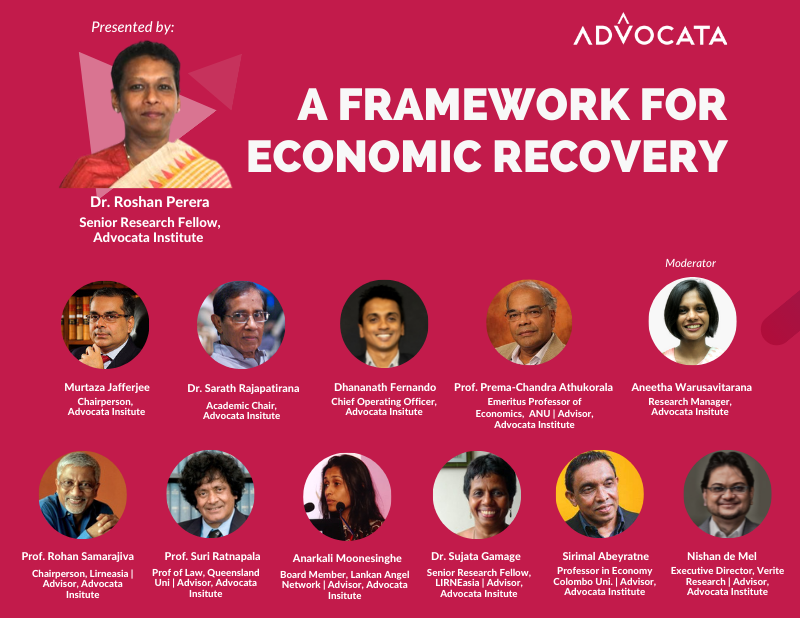 Sri Lanka should carry out urgent and credible economic reforms to create a stable environment to emerge from one of the worst economic crises in its history triggered by unsustainable spending, debt and stifling controls, a panel of economists said.

“There is no doubt that Sri Lanka is facing a severe economic crisis. Macroeconomic stabilisation is the need of the hour,” said Advocata Institute Senior Research Fellow Dr. Roshan Perera, addressing the online event to launch Advocata’s latest publication, ‘A Framework for Economic Recovery’. Advocata is a Colombo-based think tank.

Providing a breakdown of the economic challenges before the economy, in her presentation Dr. Perera stressed on the need for immediate reforms to tackle unsustainable public debt.

The report identifies that the macro-economic instability lies in the failure of the State to implement deep structural economic reforms for nearly 20 years. The COVID-19 pandemic has exposed fundamental weaknesses that have plagued Sri Lanka’s economy for a long period of time.

The event included comments from experts on Advocata Institute’s Board of Advisors.

“None of these policy prescriptions are new. We have talked about them for years, but it’s a matter of political will to implement them. We have hit a brick wall and we need to come together as a whole and take responsibility,” Advocata’s Academic Chair Dr. Sarath Rajapatirana said.

“We need to think of the external balance not only for today but for tomorrow. We have to grow our way out of debt as opposed to starving ourselves out of debt,” said Verité Research Executive Director and Advocata Advisor Dr. Nishan de Mel, highlighting the importance of getting the balance right on growth and austerity in dealing with the crisis.

LIRNEasia Chairperson and Advocata Advisor Prof. Rohan Samarajiva explained the urgency of deep structural reforms by describing the present economic challenge. “We are in a war-like situation,” he said, stressing on the need for a common minimum program of reform agreed by many.

“Identify the key sectors – utilities and trade – which would play a huge role in the economy to build confidence. We would have to bring back parts of the 19th Amendment,” he noted, highlighting the importance of political reform facilitating better economic outcomes.

Research shows that Sri Lanka needs structural readjustment. “Sri Lanka needs some bitter policy doses at this level to get the economy back on track. We haven’t touched policy reforms for over 20 years, for which we are paying now. We are looking for short-term solutions for a long-term problem,” said University of Colombo Senior Professor of Economics Professor Sirimal Abeyrathne.

Advocata’s report, ‘A Framework for Economic Recovery,’ consists of a series of urgent macroeconomic reforms to address the present crisis. This includes the implementation of a macroeconomic stabilisation program, prioritising fiscal consolidation and debt restructuring, public finance management and public sector reforms.