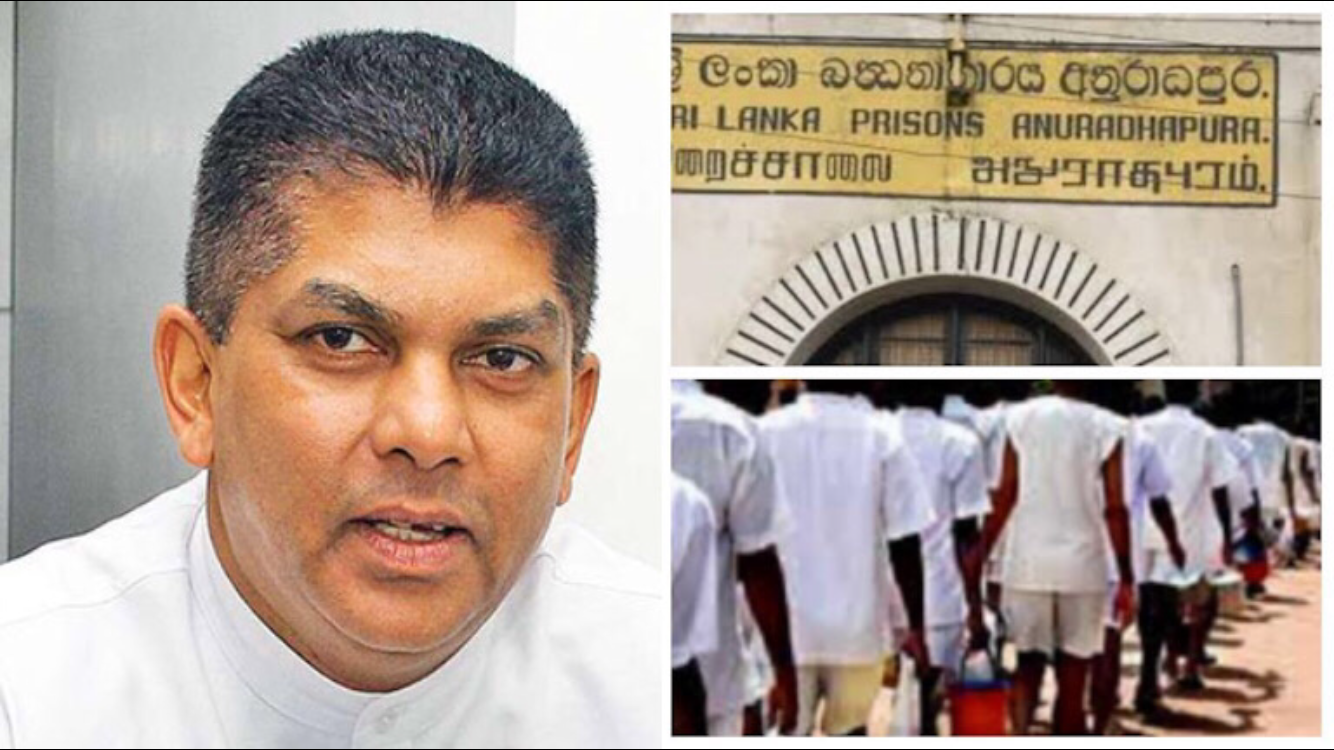 The Committee for Protecting Rights of Prisoners (CPRP) will file a writ in the Court of Appeal for an order to compel the CID to carry out its investigation into the break in to the Anuradhapura prison by State Minister for Prison Management and Prisoners Rehabilitation Lohan Ratwatte. It is nearing one month since Ratwatte allegedly threatened and intimidated a group of prisoners during the incident but there has been no progress with the CID inquiry. Soon after the episode took place, the CPRP lodged a complaint with the CIDwhich should have triggered an inquiry. In any event, under s.109 of the Criminal Procedure Code the police have a duty to investigate an incident when they get information about it, irrespective of whether or not a complaint has been made to them.  The Ratwatte incident made headline news and was not one which could have escaped the attention of the police. According to legal counsel Ratwatte’s actions amount to multiple offences under the Offensive Weapons Act, the Penal Code, the Prisons Ordnance and the International Covenant on Civil and Political Rights because the incident involved a specific group of prisoners who are in remand custody under the Prevention of Terrorism Act (PTA). The group of ten prisoners Ratwatte is alleged to have threatened have been remanded by the Magistrates Court in Vavuniya and some have trials pending in the High Court. One prisoner has been convicted under the PTA. The irony in the move to file the writ must not be lost because here is a case where citizens now have to resort to invoke the courts to get the CID to do the work it is duty bound to carry out.

Several inquiries have been launched following the incident which has been denied by prison officials at the apex of prison administration.

In a now familiar trajectory, the government appointed a former high court judge to inquire into the incident and present the findings in one month.  The report of the inquiry which is being carried out by judge Kusala SarojiniWeerawardane can be expected soon. The Sri Lanka Human Rights Commission is also conducting an inquiry. The prisoners who were involved in the incident have remained in the Anuradhapura prison during the course of all these inquiries and the expectation is that they are not subjected to undue influence which will detract from the independence of the inquiry.

Meanwhile eight of these prisoners have filed a fundamental rights petition in the Supreme Court.  They have asked for interim orders that are deemed fit for the alleged serious offences that were committed on the 12th of September, to enlarge them on bail and for a transfer to a prison in the northern province where their cases have been lodged, preferably the Jaffna prison, where they had been held for some time earlier.  They have also asked for a declaration by the court that their fundamental rights under Articles 11 and 12 have been infringed and for suitable compensation including their release from custody.

The respondents who have been cited in the case are Lohan Ratwatte, the Superintendent of Prisons in the Anuradhapura prison M H R Ajith, Commissioner General of Prisons HMTN Upuldeniya and the Minister of Justice Ali Sabry.

In their petition, the petitioners state that on the 12th of September 2021 at about 6. 05 pm they had been asked to come out into the courtyard of the prison complex where Ratwatte, another person who appeared to be his secretary, others who looked like his security detail and some prison guards were present. Ratwatte had told them to stand in a semi– circle and kneel before him.  He had then started abusing them in Sinhala, saying the President had given him all the powers in relation to PTA detainees and that he could either release them or shoot them dead. He had a pistol in his hand and appeared drunk.Ratwatte had then demanded to know what crimes each of them had committed.  One of them, the first in the semi –circle, had said he did not understand Sinhala at which point Ratwatte had got very annoyed and started shouting at him. Another of the petitioner’s had then intervened and translated the questionwhich the first petitioner had gone on to ask from the rest of the petitioners.

Ratwatte had kept shouting abuse at the petitioners for a while and had ordered eight of them to go in, leaving behind only twopetitioners.  For the purpose of referencing only,these were the two petitioners who had been involved in the translation of the question which Ratwatte had initially put to them. Ratwatte had then put his pistol to the head of the petitioner who said he did not understand Sinhala and loaded the pistol saying he was going to shoot him dead. At this point those who had been with Ratwatte and the prison guards had intervened to appease him and had taken him away from the courtyard.  The petitioners state they were all in great shock and fear and the prison guards had told them that the minister had left the prison and not to be afraid. In their petition they go on to state that they are still traumatized and they have heard of massacres in Sri Lankan prisons including that of 50 PTA detainees who were killed in the Welikada prisons in July 1983 and those at Bindunuwewa. The petitioners go on to state that Human Rights Commission officials have recorded their statements and that they have been told that other inquiries will also happen. They say they are apprehensive to speak about the incident in detail at any inquiry while still at the Anuradhapura prison.

Before his incursion into the Anuradhapura prison, Ratwatte had allegedly gone into the Welikada prisons in an inebriated state for a tour of the gallows. He had reportedly been accompanied by friends.

The Tamil National Alliance informed an EU delegation which was in the country on a review visit two weeks ago about the Anuradhapura incident which will have a significant impact on their decision whether to continue with Sri Lanka’s GSP + concession which was granted to Sri Lanka on condition that the PTA is repealed.

The government meanwhile prepares to present the 2022 budget to parliament on November 12.  It comes at a time the country’s economy is gasping for resuscitation and economics forecasters are painting a gloomy picture.  The antecedents of the two topmost officials who are expected to steer the country out of its economic quagmire, Finance Minister Basil Rajapakse and Central Bank Governor Ajith Cabraal, are hardly reassuring. Rajapakse has had many allegations of financial misappropriation levelled against him.  One of these is an allegation that he used 33 million rupees from the Divinaguma Fund, a pot of government money for poverty alleviation, in the run up to the presidential election in 2015 in which his brother Mahinda Rajapakse ran for the presidency and lost. Last week, the Attorney General withdrew the indictment against Rajapakse which was in the High Court and the case collapsed.

Cabraal is notorious for allegedly misappropriating 23 billion rupees or $6. 5 million in a Greek bond scam when he was the governor of the Central Bank between 2006 and 2015. His re appointment to the same office last month is viewed with trepidation to say the least.

On 1 October, Cabraal rolled out a short term road map for clarity on the movement of Sri Lanka’s macro economic fundamentals and financial system stability . Global financial services giant Citi’s response to the short– term road map was that it ‘provides more detailed context for investors and stakeholders but contains somewhat less clarity and longevity than some investors sought.’

Cabraal is known for fighting shy of going to the IMF for a bail out. Economists see this as the most viable path at this juncture of Sri Lanka’s economic woes. It was only earlier this week that Cabraal told Bloomberg, the US based financial news media conglomerate, that the Central Bank will mirror an IMF program without going to them to which the former Minister for Economic Reform Harsha De Silvareplied in a tweet that ‘all the people can’t be fooled all the time ‘.

According to Verité Research, a local think tank on economics, law and media, the worst is yet to come.

It sees the main challenges arising from the coupling of poorly formulated fiscal/budget measures and pandemic induced setbacks which have resulted in successive downgrades of Sri Lanka’s credit ratings. ‘This has led to Sri Lanka being locked out of global capital markets and rapidly depleted its foreign reserves as it has continued to payback foreign bondholders at the expense of negative feedback on the local economy’.

Their analysis points to Sri Lanka’s foreign reserve being completely depleted by the end of 2022 if no surprise inflows materialize and even if it did, their prediction is that the crisis will re-emerge in 2023. ‘This means that even if Sri Lanka can claim to be technically solvent, it does not have the liquidity to sustainably pay back its foreign debt until the country credit rating is improved by at least two notches’

They point out that the current path of repaying debt offers a high return to bondholders at the expense of huge pain to domestic businesses and consumers, and makes the credit rating outlook even more precarious.

‘The solution is to share the pain with bondholders by pre-emptively restructuring the debt. This can improve the foreign reserve position more quickly, and thereby improve the country’s credit rating more quickly as well. This alternative path is less painful to the local economy, offers a faster recovery, with a higher probability of success. It is a better path for the Sri Lankan economy than repaying foreign bondholders in full, even if it were able to do so’.

Their recommendation is for Sri Lanka to move to an orderly pre-emptive debt restructure as soon as possible which will make it easier to negotiate with creditors and more favourable for the Sri Lankan economy. ‘Delaying the decision is damaging and can result in outcomes that are highly disruptive.

There is a clear distinction between a forced restructuring which will happen if a country defaults in a disorderly way without negotiating with creditors and an orderly pre-emptive restructuring of debt following negotiations.

Among the fiscal reforms that Verite Research recommend are a reduction of the primary deficit to around 2% of GDP or less to help stabilise the debt at the current GDP growth rate of a little under 4% as predicted by them. The current primary deficit is at 7.4% of GDP.

The fiscal measures proposed by them include the reduction of the personal income threshold to one million rupees per annum and the reintroduction of the PAYE system with a threshold of 1.5 million rupees.  They also recommend the reintroduction of withholding tax on interest income, increasing VAT to 10% in 2022 and up to 12% in 2023 and reducing the VAT free thresholds from 300 million rupees to 150 million rupees in 2022.  A simplification ofthe corporate tax regime to a three-tier regime, increasing the total taxes on cigarettes and alcohol in line with increases in inflation and GDP according to a tobacco taxation formula introduced in the 2019 budget are also being mooted.