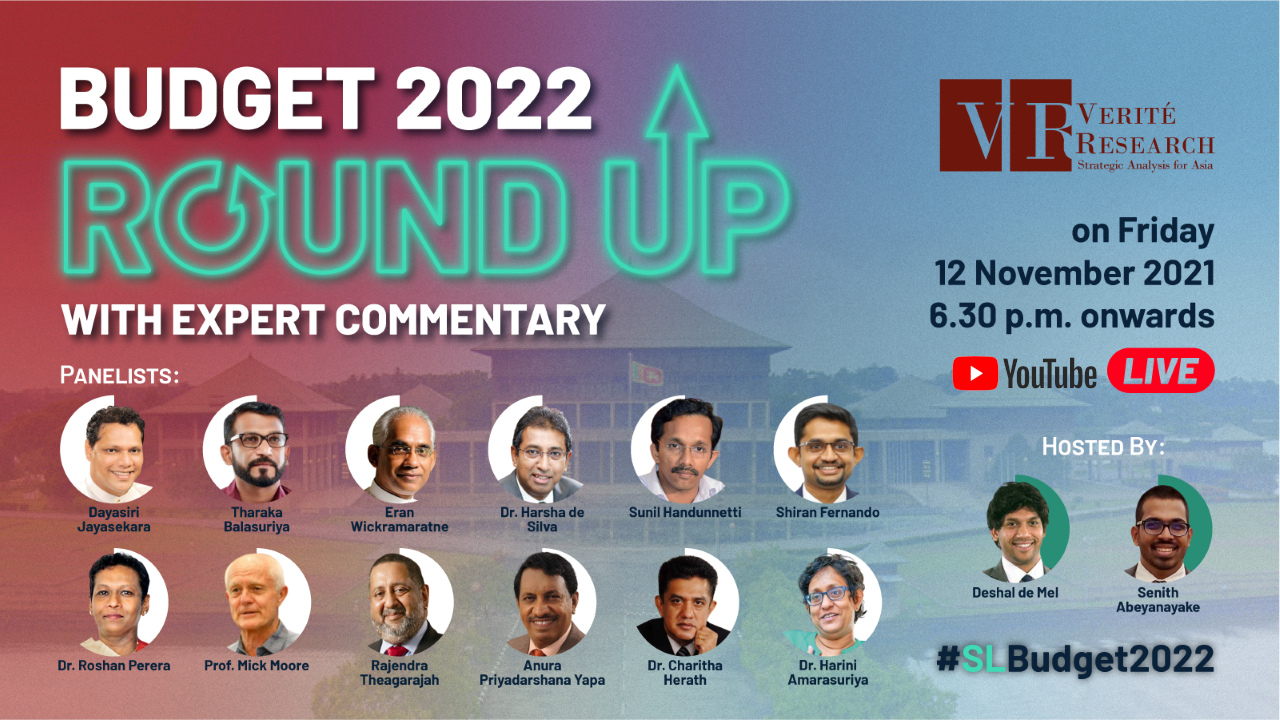 According to the values given in the budget speech, revenue is expected to grow by 46% to LKR 2,284 billion in 2022. Several new taxes and tax increases are proposed in this regard: surcharge tax on profits, social security contribution, and financial VAT.

Even if the projected contribution from the new revenue measures (LKR 333 billion) is considered realistic, the rest of the revenue base would need to grow by 24% in 2022 – at least double the expected nominal GDP growth – to achieve the expected revenue target. The discussion concluded that the estimated revenue growth of 46% was highly ambitious.

Whilst several panellists agreed that weak revenue generation is a critical constraint in the Sri Lankan economy, efforts to improve digitalisation of the tax system and other administrative improvements were highlighted by some panellists.

Similarities between the super gain tax introduced in the 2015 interim budget and the newly introduced surcharge tax were discussed. The tax is expected to bring a revenue of LKR 100 billion. However, due to its one-off nature, this tax will not be a sustainable solution to the structural revenue constraints in Sri Lanka. Furthermore, it is a retrospective tax that will undermine the government’s stated objective of creating a stable and predictable tax regime.

The proposed social security contribution appears similar to NBT tax that was removed in 2020, but the budget projects collection to be around 40% more than the typical annual collection from NBT (LKR 105 billion in 2019). This ambitions projection is in spite of having a tax-free threshold (LKR 120 million per annum) ten times higher than the NBT threshold (LKR 12 million per annum), with implementation occurring only once legislation is passed in April.

Concerns were raised regarding the dampening impact the new taxes may have on investor confidence, particularly since many of the new measures are one-off in nature, and in the case of the surcharge tax, it is retroactive in operation. The misalignment between the allocations provided in the budget speech and the priorities of the economy was highlighted throughout the discussion. The high allocations for defence, road development, and generally high levels of capital expenditure over allocations for education, healthcare, and skill development were identified as being problematic.

The panellists also highlighted that social security should not be limited to Samurdhi payments and should have a wider scope in ensuring the safety and the security of the citizens.

The proposal to include an amendment to the Appropriation Bill preventing requests for Supplementary Estimates for 2022 was viewed in a positive light by the panellists as it would ensure that the deviation from the budgeted and actual expenditure would be minimised.

The failure of the budget to address some of the critical issues facing the economy was also highlighted. The lack of attention to and focus on the management of external debt, the lack of a clear plan to regain access to international capital markets, and the related implications for dollar liquidity in the banking system were identified as shortcomings in this year’s budget.