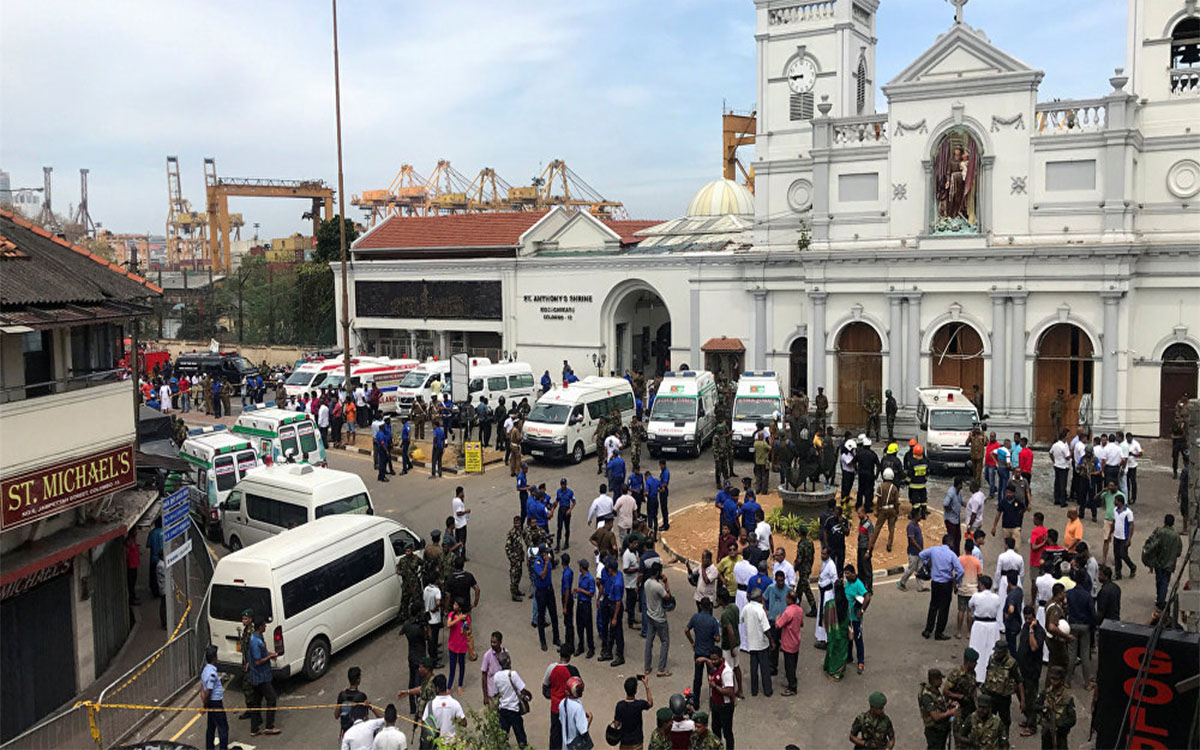 The Easter Sunday attacks across Sri Lanka have claimed the lives of at least 290 people and left over 500 people injured. The bombings targeted three churches and four luxury hotels. Security forces have arrested 24 suspects allegedly connected with the blasts. No one has so far claimed responsibility for the violence.

The country remains on high alert after Sunday’s bombings that hit eight places across the country: churches and hotels, as well as a residential compound. More than 1,000 army personnel have been deployed to provide security in Colombo, the commercial capital and Sri Lanka’s largest city.

Sputnik: What was your first reaction when you heard the news?

Dr Nishan De Mel: I think we were very shocked by the events; our shock had several strands to it. One was the horrific nature of what happened and the death and the week that it had taken place, on the day of Easter when people were in church; but the second aspect of the shock was that this was not just a single event, but a coordinated event across a large number of places. I think that it had been something that had been well planned, with sophisticated operation to coordinate attacks in many places in the country.

Sputnik: So what are the main versions now; who could’ve done it and why?

Dr Nishan De Mel: I think the fact that this was a coordinated attack that happened in this manner over a short period of time in many places, and which required a lot of planning, access to a great amount of resources, even in terms of explosives, and ability to get them to the right place, means there are very, very few actors who are capable of that kind of sophistication and action; that is what creates the puzzle. Disgruntled groups, whether communal or religious, within the country are not able to manifest that kind of coordinated action. So that creates a real puzzle about who could be doing it and who has the capacity within Sri Lanka to organise something like that.

Sputnik: We’re hearing news about Daesh fighters coming back from Syria to Sri Lanka; do you think they could’ve done this?

Dr Nishan De Mel: The problem is that we know ISIS (Daesh)* recruits people all over the world and we’ve heard stories of Sri Lankans being recruited to ISIS as well, but Sri Lanka has never been a target of ISIS and while Sri Lanka had been a recruiting ground, it has not been a target. Secondly, the Sri Lankan Christians, or Catholics, are not a group that has enmity or some kind of tension with the Muslim community in Sri Lanka. So the idea of ISIS being involved, I think, fails on at least three grounds: one is that ISIS has never seen Sri Lanka as a target, in Sri Lanka the Muslim community has not seen the Christians or Catholics as a group with which they have tension or enmity; and, thirdly, even then, to make a coordinated attack over many places — that the kind of organisational capacity may not exist for even ISIS; certainly not in Sri Lanka.

Sputnik: So what has been the reaction of authorities?

Dr Nishan De Mel: The authorities, I think, have correctly identified that there are two things they must do: one thing is to calm people down, to prevent escalation of any kind of social unrest; and they’ve been communicating to everyone and have asked for calm, have asked people to not take matters into their own hands. Secondly, they’ve been focusing on improving safety and security and ensuring that the military is deployed, they’ve declared an island-wide curfew, they’ve prevented the gathering of people in one place. So the authorities have focused on immediately bringing some semblance of stability to the situation, preventing further attacks and also preventing people’s emotions from unnecessarily getting carried away, and certainly from preventing any kind of communal disharmony with regard to what has happened.

Dr Nishan De Mel: I’m not sure what the contradictions are that you were seeing, but in Colombo there’s a curfew in place, and there’s a clear message that people should simply allow the authorities to bring stability and normalcy, and that they have got it under control. That’s the message in Colombo. That doesn’t mean that there’s an explanation yet for what has happened or who’s done it, but I think politicians have worked responsibly to make sure that people don’t act emotionally and that emotions are not unnecessarily heightened at this time.

Sputnik: How might these attacks affect the political situation in the country? What could be the outcome?

Dr Nishan De Mel: It is a very significant event politically, I think. What we’re going to see as a very significant outcome of this event is that it has brought, once again, national security and the fear of safety to the fore. If you look at the last five-ten years, the big political questions for Sri Lanka have been around how do we reduce corruption and how do we improve governance. But this kind of event can cause both concerns to be suppressed and raise up a different set of concerns about how we can have more safety and how do we improve national security. Now those were the concerns we had about 10-15 years ago at the height of a war that existed in the north and the east and those questions were set aside after the war ended in 2009 in favour of these other questions, you know, corruption, governance, development. But the big danger in events like is that it can shift the clock back and refocus the politics around national security and safety, and that’s the big political consequence that I see as probable after what happened today.

Sputnik: Do you think these attacks could somehow polarise Sri Lankan society?

Dr Nishan De Mel: I don’t think that we will see polarisation on a religious or ethnic dimension, necessarily, as a result of these attacks, because these attacks are not implicating in any way the Sinhalese Buddhist community, which is the majority community. In the past, all polarisations that have happened have had the Sinhalese Buddhist community as an actor, whether it is on ethnic Sinhalese-Tamil polarisation, Sinhalese-Muslim polarisation, Sinhalese-Christian polarisation. We’ve had some violence or unrest between Muslims and Tamils in the north and the east, but that’s more economic factors-related. So I don’t think this presents the Sinhalese Buddhist community as perpetrators, so they’re not necessarily seen as perpetrators and even the Buddhist priests, everyone is clear that nobody sees the Sinhalese Buddhists community as being responsible as actors, and the Christian community was the target. But I think the polarisation that occurs in an event like this is not an ethnic or a religious one, but a political one. Sri Lanka does have a political polarisation also between those who see interests in the politics of cosmopolitanism and governance-related politics, whereas those who see interest in politics that’s more nationalistic, or less cosmopolitan nationalism, with a focus on security, a securitised kind of development. That’s the polarisation that can come to the fore; that politically those who argue for national security as being something critical for the country, I think, are going to emerge as having a stronger relevance in a situation like this.

The views and opinions expressed by Dr Nishan De Mel are those of the expert and do not necessarily reflect those of Sputnik.