Next Hambantota? Welcome to the Chinese-funded US$1.4 billion Port City Colombo in Sri Lanka 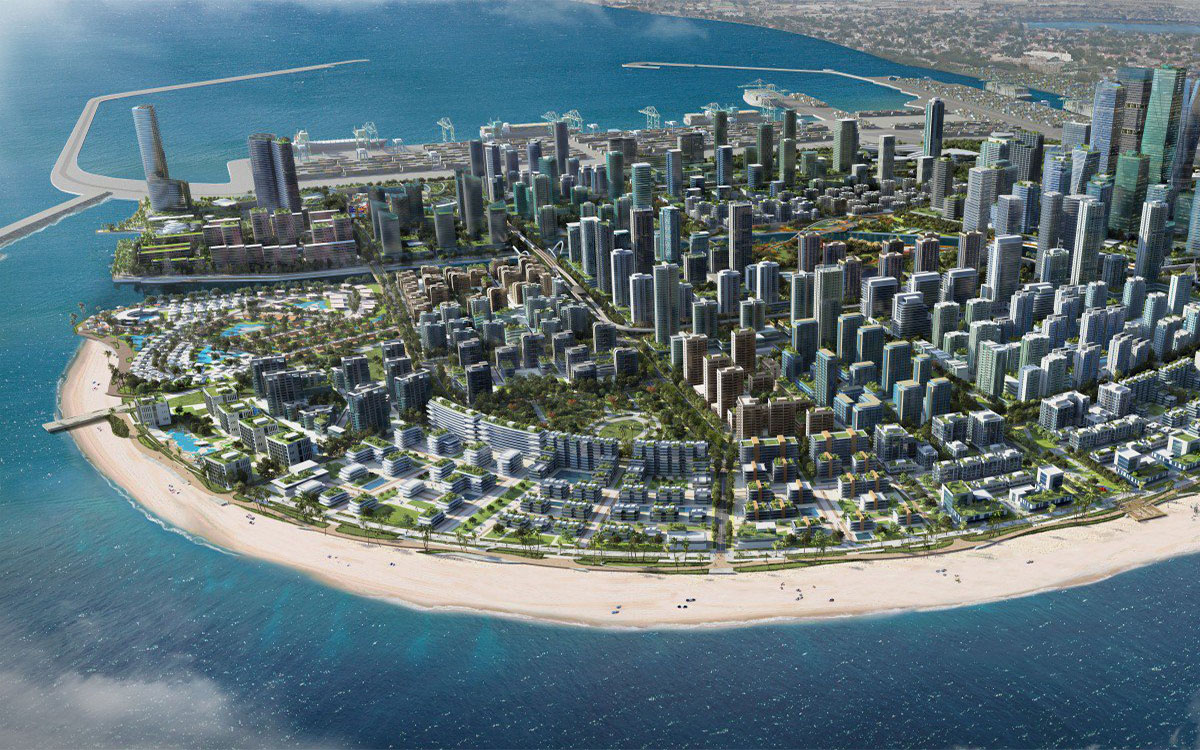 When the sun goes down, Galle Face Green – the seaside urban park south of the financial district of Colombo, Sri Lanka’s capital – fills up with life. As makeshift stalls selling everything from tropical fruit to cheap clothes line the seafront, daytrippers, teenagers, and lovers throng the site next to the Indian Ocean.
Soon, the scenery they face will be quite different. Port City Colombo, an ambitious Chinese-funded project to build a new metropolis on a 665-acre island reclaimed from the sea, is set to rise just off the popular spot in a couple of decades. Rising in tandem, however, are concerns about the amount Beijing is lending Colombo, and the circumstances of those loans – with the controversial China-backed Hambantota Port looming large in Sri Lankans’ memory.

The government is talking up Port City, which will add an area the size of central London to Colombo, nearly doubling its current size. “It’s the first time we got the opportunity to develop an entire new city on a blank piece of land,” said Jagath Munasinghe, chairman of Sri Lanka’s Urban Development Authority. “It’s a completely new experience we can learn a lot from.”

Renderings of the future city show a cityscape akin to leading Asian cities such as Hong Kong and Singapore. Gleaming apartment towers dot the skyline, with luxury hotels, glossy shopping malls, parks and canals giving way to fancy, low-slung residential units. Developers expect around 80,000 people will live in the city once it is completed, with another 250,000 commuting in daily.

Port City, part of China’s expansive Belt and Road Initiative, is the biggest foreign direct investment in Sri Lankan history. It is financed by a US$1.4 billion loan issued by China Communications Construction Company, the mammoth state-owned engineering firm that is also the belt and road plan’s biggest builder.

In its proponents’ view, the project aims to address a problem that has long dogged Sri Lanka. Still recovering from a 26-year civil war with an economic cost that many estimates place at US$200 billion, the island nation’s US$90 billion economy doesn’t create enough jobs, making it a net exporter of labour.

Each year, around 200,000 Sri Lankans, many of whom are highly skilled, leave the island nation in search of employment. The hope is that turning Colombo into a major financial centre will bring jobs and stem the brain drain.

“We lost our opportunity to Dubai and Singapore, and now we are trying to catch up,” Champika Ranawaka, Minister of Megapolis and Western Development, said last year.

Land reclamation for Port City was completed last January, and developers are confident the first buildings will appear within a few years. But as investors line up and land sales are set to begin next month, concerns are growing about China’s involvement and the project’s adverse impact on the environment and local economy.

The idea to expand Colombo’s commercial district seaward was first floated in 2004, in a plan involving the development of a small-scale offshore area next to the city’s harbour. Back then, however, the civil war was still raging and the scheme was put on hold.

The project resurfaced, bigger in size, five years later, when the war ended and Sri Lanka opened its doors to foreign investors. But political divisions and the spectre of conflict kept warding off most of them, except one – China.

“The Sri Lanka-China relationship dates back to the founding of both countries amid the backdrop of the early cold war,” said Subhashini Abeysinghe, an economist from Verité Research, a think tank based in Colombo. “After the war ended, it’s just been constantly on the rise, especially in terms of economic ties.”

China’s heightened interest in Sri Lanka is largely due to its geography. Sitting right below India’s southeastern tip, it has long been a major maritime trading junction across Eurasia. As Beijing shores up its presence across the Indian Ocean as part of its belt and road infrastructure scheme, Colombo could provide it with a strategic doorway to the Indian subcontinent’s rapidly developing markets.

Port City Colombo is just one Chinese-funded infrastructure project in Sri Lanka. Over the past two decades, Beijing helped fund and build motorways, airports, ports and railways across the island, lending Colombo over US$8 billion – most of which went to fund an ambitious infrastructure spree in the southern province of Hambantota, the hometown of former president Mahinda Rajapaksa.

Another, the Hambantota Port project, offered a vivid glimpse of what critics refer to as China’s debt-trap diplomacy.

In December 2017, unable to pay back a loan that had been used to upgrade a structure that currently draws not even a ship per day, Sri Lanka handed over the seaport and 15,000 acres of land around it to China for 99 years, giving the nation the outright ownership of a territory a few hundred kilometres off the coast of its competitor, India.

More worryingly, these projects have left Colombo US$5.5 billion in debt to Beijing – more than 10 per cent of its total external debt.

In May last year, struggling with its upcoming debt payments, the country borrowed a further US$1 billion from China Development Bank; and in March, it secured a US$989 million loan from China’s Exim Bank to build a highway connecting Hambantota province to the central region of Kandy.

“The lure of belt and road money is hard to resist for developing nations as it provides something they are in bad need of – funding for infrastructure,” said Smruti Pattanaik, a research fellow at the Institute for Defence Studies and Analyses in New Delhi. “But Chinese largesse doesn’t come for free, and Sri Lanka is a classic example of this.”

The main risk, said Freddie Kleiner, senior analyst for London-based consultancy Alaco, is that of a debt-to-equity swap such as the one that occurred with the Hambantota Port. “It’s a very real possibility, though I think the Sri Lankan government would be very reluctant for a similar scenario to occur for Colombo Port City, particularly given the economic returns it hopes the project will generate,” he said.

Then there’s the sovereignty issue. Sarath Iddamalgoda, a coordinator of the People’s Movement Against Port City collective, was concerned over what kind power of power China would exert on the territory: “How is China going to behave – as the landlord or a tenant? Will it decide who is going to live there and under what conditions?”

Sri Lankan environmentalists also maintain the Port City project is detrimental to both tourism and fishing.

Hemantha Withanage, director of the Colombo-based Centre for Environmental Justice (CJE), said while Port City might increase urban tourism by luring people seeking top-class entertainment and high-end shopping, it was likely to reduce the number of tourists visiting surrounding cities and rural areas.

Withanage also argues the project’s figures just don’t add up – the required sand and rock alone, he said, would cost about US$4.2 billion, almost three times the initial Chinese investment.

But it’s the effect on fishermen that is the biggest concern. The CJE contends that sand mining along Colombo’s coastline to create the foundations where Port City will rise isn’t just causing coastal erosion in other areas, it is disrupting the marine ecosystem and harming the fish stocks that provide a livelihood to the 15,000-strong local fishing community. “The decline in catches since dredging operations begun is a fact,” said Herman Kumara, national coordinator of the National Fisheries Solidarity Movement.

In 2016, a prolonged hunger strike by fishermen protesting against the development convinced the government to force dredgers farther offshore, but this seems scarcely to have helped. “Fishermen’s livelihoods haven’t improved since, [nor have] fish catches,” Kumara said.

In 2015, concerns over the disruption of Colombo’s coastline due to dredging played a key part in the government’s decision to halt the project, with environmentalists and fishermen welcoming the decision.

Barely a year after, an environmental impact assessment established that Port City would not cause coastal erosion and work restarted. The report, however, scored a minor victory for fishermen, as it conceded that dredging would temporarily affect some fishing activity, in turn forcing CCCC to allocate US$3.2 million to make up for economic losses in the impacted areas.

The debate on whether such a large-scale project will actually generate as much employment as marketed and the extent to which it will attract significant foreign investment will continue.

What is certain, according to Kleiner from Alaco, the London-based consultancy, is that although “Sri Lankans have grown less wary of foreign finance, and many have started seeing projects like Port City Colombo in a positive light, the only thing they aren’t willing to bargain is national sovereignty”.